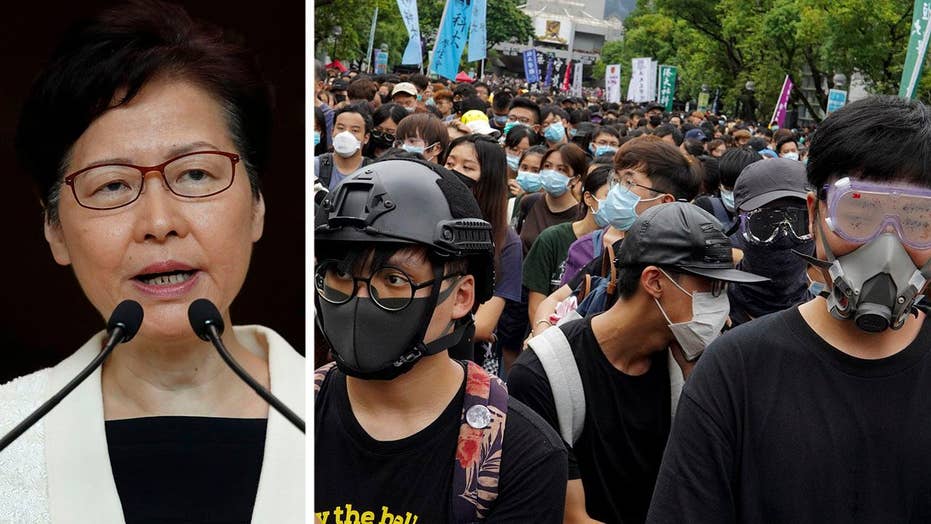 What should the U.S. government do to respond to three months of mass protests by hundreds of thousands of demonstrators in Hong Kong desperately struggling to preserve their freedom under pressure from China?

Sit back and watch as event play themselves out? Or take an active role in helping the freedom-loving people in the former British colony?

The Trump administration is making a big mistake by taking a largely hands-off policy. It needs to get off the sidelines and support the people of Hong Kong.

The White House often seems to take the isolationist sentiments of President John Quincy Adams as its model for foreign policy.

Adams said in 1821: “America goes not abroad, in search of monsters to destroy. …She well knows that by once enlisting under other banners than her own, were they even the banners of foreign independence, she would involve herself beyond the power of extrication, in all the wars of interest and intrigue, of individual avarice, envy, and ambition.”

But America in 2019 is a far more powerful and globally interconnected nation than it was in 1821. “America First” should not mean turning our back on involvement around the world.

There is much more that the United States can and should be doing to aid the 7.4 million people of Hong Kong – especially as our rivalry with China escalates through the trade war now underway and with other actions.

The first thing the Trump administration must do is identify our goal. That goal should be to maintain the unique status of Hong Kong within China.

President Trump can use immigration law to his advantage and declare that we will welcome Hong Kong businesses and citizens to relocate to the United States.

Before Britain ended its colonial rule and returned Hong Kong to China in 1997, China agreed to make the city a special administrative region with a high degree of autonomy so it could maintain its own economic and governmental system under a policy known as “one country, two systems.”

Today Hong Kong stands as a shining contrast to the authoritarianism and repression of the Xi Jinping regime that rules China with an iron fist, much like West Berlin was a bastion of freedom in the middle of Communist East Germany during the Cold War.

But now China is seeking to exert more control over Hong Kong, in what seems to be an effort to gradually end the city’s special status – understandably alarming Hong Kong’s citizens.

There’s no doubt that the U.S. government would like to avoid any violence by the Hong Kong protesters, which could trigger Chinese military intervention on a scale like Tiananmen Square in June 1989. Estimates are that several thousand demonstrators were killed by Chinese troops to end protests in the square that began in April that year.

But if the violence in Hong Kong escalates, with a move by police or the military to crush the freedom demonstrations, the U.S. should respond as part of our longer-term struggle with Beijing.

An American response is needed not just because we have an interest in preserving an enclave of capitalism and individual liberty in East Asia. If China is the rising threat against us, we have an interest in drawing contrasts between the prosperity and freedom in Hong Kong and the authoritarian repression of Xi Jinping’s China.

Our options are limited. We cannot intervene militarily, just as we could not stop Soviet repression in Hungary in 1956 or Czechoslovakia in 1968.

We are limited in what additional economic sanctions we could impose on China, because the Trump administration is already inflicting heavy pressure on China for its unfair trade practices.

Washington does not have the leverage in China that it had in Asia in the 1980s, when it could use its close economic, political, and military ties to help nations such as South Korea, the Philippines, and Indonesia evolve from military dictatorships into democracies.

Nevertheless, the Trump administration has a valuable opportunity to expose the Chinese government for what it is: a brutal authoritarian dictatorship.

What more can we do?

President Trump can use immigration law to his advantage and declare that we will welcome Hong Kong businesses and citizens to relocate to the United States. By some estimates, Hong Kong’s per capita income would rank it around the 15th richest nation in the world. It places first in the Heritage Foundation’s Index of Economic Freedom.

Hong Kong is valuable to China because it grants the mainland access to the capitalism and dynamism of the West. The United States can try to remove that advantage by encouraging the banks and companies located in Hong Kong to move.

The U.S. can welcome Hong Kong’s economic and intellectual leaders to our shores, where their liberty and freedom will be protected.

In addition, the American government should take advantage of China’s brutality to tighten our alliances in Asia – not just with countries like South Korea and Japan, but also India, Vietnam, Malaysia, Thailand and Indonesia.

Hong Kong is a preview of what could happen to those nations if they become vassals of the Chinese. They will see the contrast with American leadership, which has provided the peace and stability necessary for Asia’s incredible postwar economic growth.

Trump could even resuscitate the Trans-Pacific Partnership, which is designed to exclude China from the growing Asian trading system. Asian countries will see that they cannot trust China’s word, as Beijing’s efforts to impose authoritarian rule in Hong Kong violate the agreement with Britain transferring the territory to China.

These policies could send a message to the mainland Chinese that they are not be fated to live under repression. They can see in Hong Kong, and other places like Taiwan and Singapore, that they can flourish if they live under the right government.

The Trump administration can also send an important message to other Asian nations that they should choose to ally with the United States instead of China. If the Xi regime treats its own citizens this way, simply because they want the respect for the freedoms that they were promised, how will it treat its neighbors?