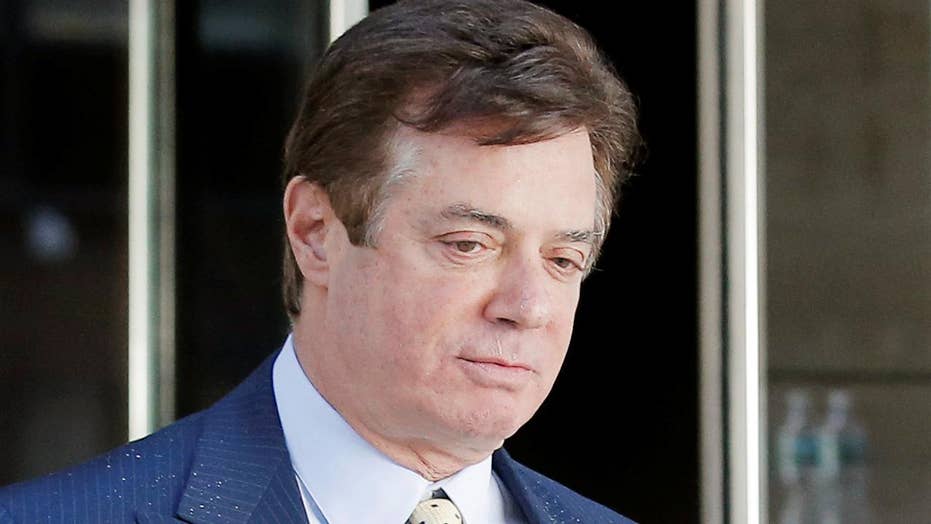 Judge Andrew Napolitano breaks down the charges in the Russia collusion probe on 'America's Newsroom.'

The news that GOP political fixer Paul Manafort and an associate have been indicted by Special Counsel Robert Mueller on money laundering and conspiracy charges isn’t a stunning surprise.  Manafort’s career in Washington was often conducted in and out of the shadows. Now he’s been dragged under a searchlight. Manafort should have known you should be careful what you wish for in politics.

A former political consultant, the 68-year-old Manafort had been out of active politics for over a quarter century. He’d become a sometime lobbyist and political operator with many international clients. But in April, 2016, his old bad boy business partner Roger Stone, a frequent advisor to Donald Trump, helped land him the job of Trump campaign manager. The gig promised to be exciting, would raise Manafort’s profile with his business clients and, hey, Trump was on course to win the GOP nomination and perhaps even the presidency.

Trump did indeed go all the way, but for Manafort the assignment was a disaster. He boasted to reporters he would make Trump “more presidential,” enraging a boss who hates the idea of political handlers.

That was only the beginning of the bad news. Manafort for a decade had business ties to Ukraine, where he did work for Oleg Deripaska, a billionaire oligarch linked to Russia’s leader Vladimir Putin.  In July, 2016, Ukrainian sources inside the anti-Putin government there leaked ledgers that showed large cash payments to Manafort in exchange for his work for a pro-Putin political party.  Many speculated that Manafort might not have reported all the income.

The Manafort indictment only makes the entire Russian collusion narrative more murky rather than less. Certainly, it is an embarrassment to the Trump White House. But it may ultimately be equally embarrassing for other parties when we learn just how tangled a web Manafort weaved.

Those revelations were the final straw for a campaign that was already under attack for being too ambivalent about Russian misdeeds. The Trump campaign itself was sputtering in mid-August and Manafort was replaced by the triad of Steve Bannon, Kellyanne Conway and David Bossie.

Manafort may have left the campaign, but time bombs he planted while he was there continue to explode around Team Trump.  His Ukrainian business dealings included a series of mysterious money transfers from overseas accounts to domestic U.S. businesses like car dealerships. Apparently, those transfers were enough to convince the federal court overseeing U.S. intelligence agencies to being surveillance of Manafort’s office in Trump Tower in New York beginning only a month after he became campaign manager.

An additional reason to continue investigating Manafort arrived in June, 2016 when Manafort,  Donald Trump Jr., and Trump son-in-law Jared Kushner met with a Russian lawyer with the advertised purpose of sharing damaging information on Democratic presidential nominee Hillary Clinton.  Nothing apparently came of the meeting, and the Russian lawyer has since been linked to both the Kremlin and the dirt-digging firm Fusion GPS that commissioned the infamous anti-Trump “Steele” dossier.  Could the meeting have been a possible “sting” operation designed to implicate Team Trump in collusion they really never engaged in?

Indeed, Manafort’s indictment can be viewed on two levels.  On the one hand, Special Counsel Mueller could be using it to squeeze Manafort for information on Trump higher-ups, perhaps including the president himself. But recent revelations that Manafort frequently worked on Russian-Ukrainian issues with Democratic super-lobbyist Tony Podesta - the brother of Hillary Clinton campaign chairman John Podesta - raises lots of questions. Podesta’ firm is reportedly  under investigation by Mueller’s office for possible failure to report its lobbying activities on behalf of foreign clients.

So the Manafort indictment only makes the entire Russian collusion narrative more murky rather than less. Certainly, it is an embarrassment to the Trump White House to have your former campaign manager indicted. But it may ultimately be equally embarrassing for other parties when we learn just how tangled a web Manafort weaved in the shadowy world of Washington influence peddlers.