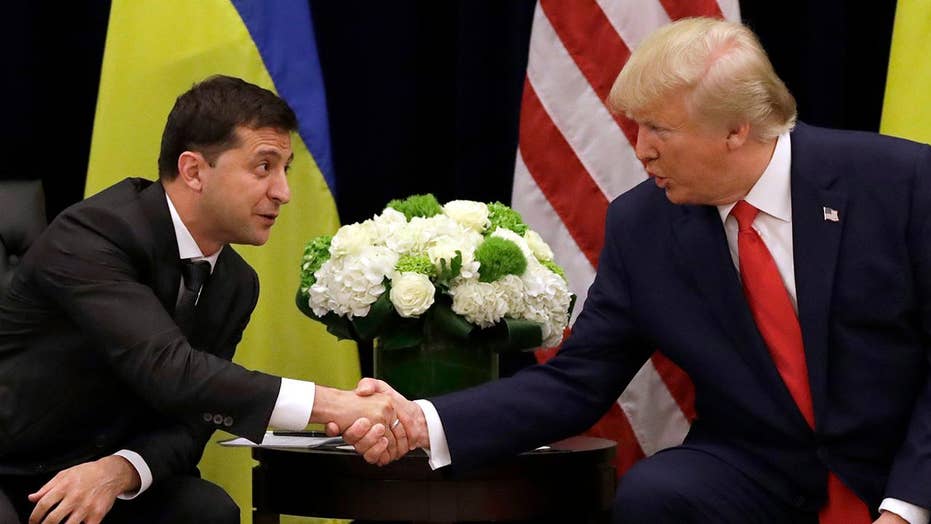 While President Trump continues to insist that his July 25 phone call with Ukrainian President Volodymyr Zelensky was “perfect,” it is becoming increasingly obvious that his claim is absurd and that he improperly pressured Zelensky to interfere in our 2020 presidential election in return for vital U.S. aid.

This is the main takeaway from the House Intelligence Committee’s impeachment inquiry of President Trump that moves into its second day of public hearings Friday. More witnesses are certain to confirm Trump’s misconduct.

The unfortunate truth is that instead of pursuing America’s national interest by giving Ukraine nearly $400 million in assistance to resist invading Russian military forces, Trump tried to extort Zelensky to benefit Trump’s personal political interests. This is not what our presidents are supposed to do.

TRUMP HAMMERS DEMS FOR IMPEACHMENT FOCUS AT LOUISIANA RALLY: 'WE DID NOTHING WRONG -- AND THEY'RE DOING NOTHING'

Trump saw former Vice President Joe Biden as his likely Democratic opponent in the 2020 election, and so sought to get Zelensky to launch an investigation of Biden and his son Hunter (who served on the board of a Ukrainian natural gas company) that would smear the former vice president’s reputation and make Biden less likely to be elected president.

Trump’s action was unquestionably improper, and many people – including me – believe it was illegal.

The Democratic-controlled House will have to decide this issue when it votes on whether to impeach Trump. If it does, the Republican-controlled Senate will have to hold a trial to determine if Trump’s conduct warrants his removal from office.

No president has ever been removed from office by Congress, though President Richard Nixon resigned in 1974 to avoid likely removal if he had gone to trial in the Senate in the Watergate scandal.

Trump’s Republican defenders in the House and Senate argue that since Trump eventually released the aid to Ukraine without getting Ukraine to investigate the Bidens he did nothing wrong.

We all know the answers to these questions: yes, yes and yes.

Trump’s attempted crime was interrupted by a whistleblower filing a complaint about the July 25 Trump-Zelensky call and news stories disclosing this. Without the whistleblower complaint, all indications are that Zelensky would have ordered the investigation of the Bidens – along with an investigation of a debunked claim that Ukraine interfered in our 2016 presidential election on behalf of Hillary Clinton.

Trump demanded both investigations in return for giving Ukraine the U.S. aid that had been approved by Congress, and had blocked the release of the aid as part of his plan to extort Zelensky to meet his demands. Only disclosure of the Trump attempted extortion prompted him to give Ukraine the aid it desperately needed.

Trump’s action was unquestionably improper, and many people – including me – believe it was illegal.

Taylor and Kent came off as nonpartisan, patriotic, researched and consistent. Their attention to detail was on full display, having taken copious notes documenting every aspect of their experience with Trump’s wrongful conduct regarding Ukraine.

Taylor even came with new information since his closed-door deposition in late October that gave additional fodder to the central charge of this impeachment inquiry: President Trump was trading arms for dirt on his political opponent.

Taylor reported that his aide David Holmes heard U.S. Ambassador to the European Union Gordon Sondland on the phone with Trump on July 26 discussing the investigations Trump wanted into the Bidens and our 2016 election.

Holmes then asked Sondland what the president “thought about Ukraine.” According to Taylor, "Ambassador Sondland responded that President Trump cares more about the investigations of Biden, which Giuliani was pressing for.”

The Associated Press reported Thursday that a second diplomatic staffer, Suriya Jayanti, also overheard the conversation between Sondland and Trump. Trump has said he doesn’t recall this July 26 call, the day after his conversation with Zelensky.

Doesn’t recall? That sure is convenient.

I expect Ambassador Sondland will be amending his testimony one more time to account for these new details.

Protest as Republicans might, all the dots have been connected to show Trump’s unquestionable misconduct. The timeline that exists now is incredibly damaging to Trump.

July 25: The Trump-Zelensky phone call takes place. Trump mentions the Bidens and tells the Ukrainian president “I would like you to do us a favor though” and launch investigations, according to a rough transcript of the call released by the White House.

Sept. 9: The Justice Department informs the House of the whistleblower complaint raising serious concerns about the Trump-Zelensky call.

The order of events is critical to undermining the Republicans’ argument, since they have been relying on the fact that there couldn’t have been a quid pro quo because U.S. military aid was released without investigations.

As the timeline shows, Trump’s attempted crime was interrupted by the whistleblower complaint being filed. What’s more, our legal system holds people accountable for attempted crimes. Plenty of people are serving time in our prisons and jails for crimes they tried but failed to carry out because they were foiled in the act.

Republicans have also been arguing that since Zelensky said much later that he didn’t feel pressured by Trump in the July 25 call, nothing inappropriate had happened. It is obvious Zelensky said that because he feared angering Trump, which could create future problems for Ukraine.

But after Wednesday’s testimony, we know that the Ukrainians were acutely aware of what was happening with the withholding of vital U.S. aid, and felt pressure to do the bidding of Trump and Trump’s personal attorney, former New York City Mayor Rudy Giuliani.

Not only did Giuliani publicly state that these investigations would be “very helpful” to Trump, but Taylor testified that Sondland told him that he had personally encouraged Zelensky to make it clear to Trump that Zelensky was committed to the investigations.

Additionally, Ukraine’s national security adviser told Taylor that Zelensky did not wish to be a pawn in a U.S. political campaign five days before the call occurred. By September, there are a number of indications that not only did the Ukrainians feel pressured, but they also knew that the American aid had been frozen, according to the testimony of Taylor and Tim Morrison, formerly of the National Security Council.

Republicans tried desperately at the Wednesday hearing to divert attention from the real issues at hand by promoting conspiracy theories like the claim that the Ukrainians interfered in our 2016 election or that there was something sinister going on vis-à-vis the Bidens and gas company Burisma.

Kent and Taylor quickly knocked down these claims. But I expect that Republicans will continue to promote these fairytales that make the president seem a little bit less corrupt to his base.

Now the truth has come out. And more will come out as more witnesses testify about President Trump’s misconduct.

Because the Senate would need the votes of 20 Republicans to remove Trump from office if he is impeached by the House, the odds are that he will remain in office.

But the House impeachment inquiry will shed needed light on how Trump has improperly used his office for his personal benefit, giving voters important information to consider when they cast ballots in the 2020 presidential election.