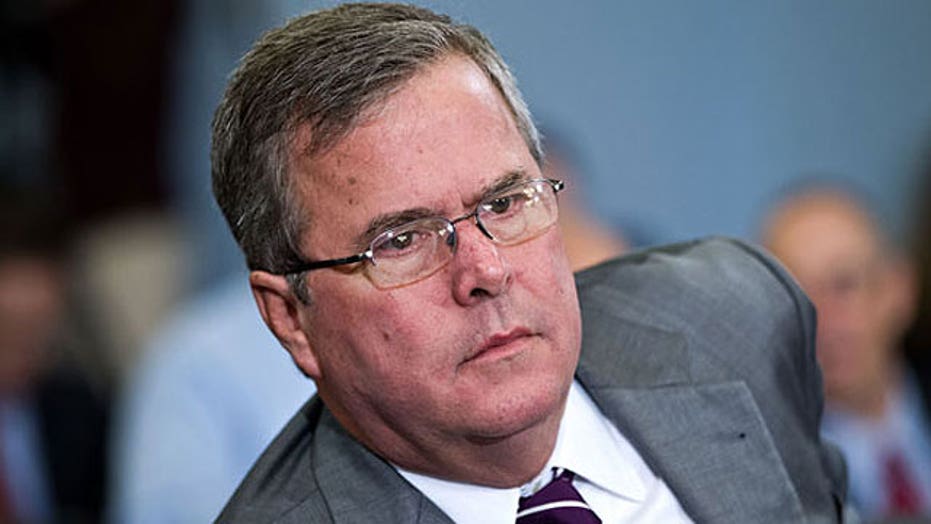 Will Jeb Bush run for president in 2016?

Former Gov. Jeb Bush (R-Fla.) is thinking seriously about running for president in 2016, according to his son, George P. Bush.

According to Commentary magazine, Jeb Bush had an impressive record as governor, including tax reductions totaling $20 billion. Given that performance, why is Grover Norquist, president of Americans for Tax Reform, upset?

Politico, and many others, assert it's because of an answer Bush gave in 2012 to a hypothetical question posed by a member of the House Budget Committee, which resurfaced now as he contemplates running for president. Bush was asked if he could accept tax increases of $1 dollar for every $10 dollars in spending cuts. He said he could and seemed enthusiastic about the 10-for-1 formula.

Norquist and other anti-tax advocates perhaps see in Bush's comment a replay of his father's pledge at the 1988 Republican National Convention: "Read my lips: no new taxes." He violated that pledge when congressional Democrats promised to cut spending in exchange for tax increases. Bush raised taxes. Democrats did not cut spending. Many have long believed that broken promise contributed to his failure to win a second term.

Republicans allow themselves to get caught in this trap because many assume that government not only needs increasing amounts of taxpayer money, but that it can be relied upon to spend it wisely. Anyone who believes that hasn't been paying attention.

The Treasury Department last week released figures showing tax revenue in fiscal 2014 exceeded $3 trillion for the first time in American history. Treasury also said the deficit was nearly $500 billion. The national debt has passed $17 trillion, and continues to climb. As Ronald Reagan and other conservatives have noted, the reason we have such massive debt is not because the American people are undertaxed; it is because their government overspends.

If spending cuts alone were implemented, Jeb Bush would have no need to increase taxes. Doesn't that work with our credit cards? If we reduce spending without additional income, we will have more money in our pockets to save and invest.

Republicans need to reject the notion that government needs more money and change the subject to the elimination of wasteful and unnecessary spending. Deep within our DNA remains a Puritan ethic of living within one's means and not borrowing to pay for what we can't afford.

Some things remain true regardless of the era. I have always appreciated what Calvin Coolidge said about taxation. Here are just three of his better utterances on the subject, which contemporary Republicans would do well to memorize:

"The collection of any taxes which are not absolutely required, which do not beyond reasonable doubt contribute to the public welfare, is only a species of legalized larceny."

Or this one: "The wise and correct course to follow in taxation is not to destroy those who have already secured success, but to create conditions under which everyone will have a better chance to be successful."

And this: "No matter what anyone may say about making the rich and the corporations pay the taxes, in the end they come out of the people who toil."

These quotes and many other wise sayings of the 30th president can be found in Peter Hannaford's book, "The Quotable Calvin Coolidge." Jeb Bush and other Republicans who would even consider more tax hikes might want to carry around a copy and read from it whenever they feel the urge.