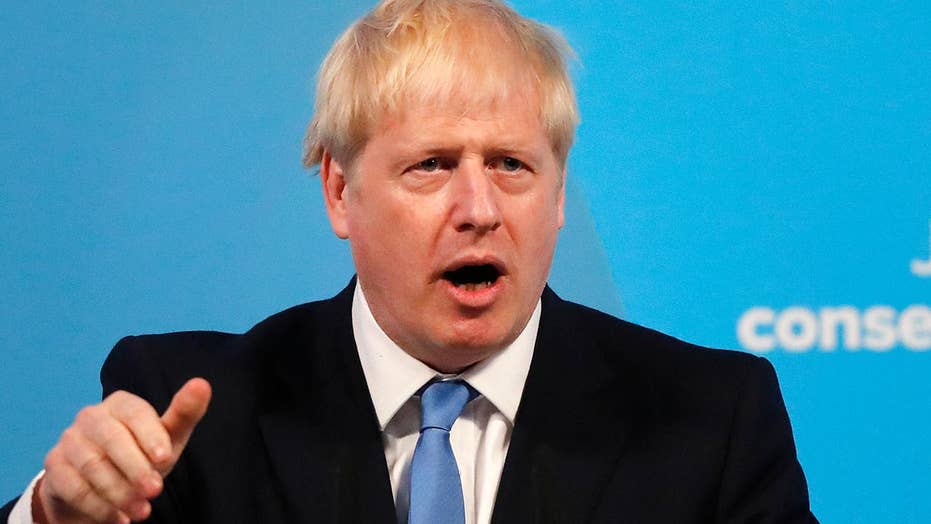 Former London Mayor Boris Johnson addresses the Conservative Party in London after winning the vote to replace Theresa May.

Sure, Boris Johnson, could use a comb. But he’s already got what matters most in a leader and ally: a backbone.

With Johnson as its new British Prime Minister, the United Kingdom can expect a bolder and more self-confident foreign policy. And the changes he makes will likely be welcomed in Washington.

Here are the top six foreign policy “resets” we can expect to see from the new PM:

6. Exit with Brexit. Johnson is committed to leaving the European Union (EU). That’s significant to the U.S. on both the trade and foreign policy front. The EU considers both of these areas to be part of its purview, meaning that -- even if an individual member-state thinks a given policy is good -- the union can nix it.

Freed from the policy shackles of Brussels, Britain will be able to ink a bi-lateral free trade agreement with the U.S. That should give an immediate boost to both economies.

In addition, Britain will be able to speak with a completely independent voice on European foreign and security affairs. For too long, the EU’s consensus-based approach to policy-making has produced lowest-common-dominator foreign and security policies. A truly authentic British voice will be a powerful and much-needed antidote for European groupthink.

5. Tough love for Iran. Johnson will likely break with efforts by France and Germany to resuscitate the moribund Iran deal. Paris and Berlin are trying every which way to undercut the Trump administration’s get-tough approach to Tehran. Johnson appears to share Trump’s belief that the best way to get Tehran to stop destabilizing is to ramp up pressure on the regime via sanctions.

4. No love for Russia. Unlike some western European capitals, London has consistently taken a tough line on Moscow. That includes support for serious sanctions. That won’t change. Johnson sees Russia for what it is: the chief external threat to the peace and stability of Europe.

3. Dose of realism about Beijing. Johnson knows that Europe can’t sit on the sidelines while the U.S. and China butt heads around the world. He is a realist.

No, Britain’s not about to stop doing business with China entirely. But you can expect Johnson to jawbone European leaders about the need to stop thinking about China as just a benign checkbook. Beijing’s economic and diplomatic outreach is tainted by corrosive, self-serving elements that aren’t good for Europe’s economy or security.

Unlike some western European capitals, London has consistently taken a tough line on Moscow. That includes support for serious sanctions. That won’t change. Johnson sees Russia for what it is: the chief external threat to the peace and stability of Europe.

Governments are going to have to take a tough look and differentiate between Chinese activities that are acceptable and those that are dangerous. Huawei is a good example, but only the tip of the problem. Building national 5G telecom networks on a foundation of Huawei hardware and software is an unacceptable national security risk for any nation that doesn’t want to get owned by Beijing. And Johnson knows it.

2. Yes to burden-sharing. Trump won’t be the only leader beating the drum that it’s time for the deadbeats in NATO to starting meeting their mutual defense obligations. Britain is one of the few alliance members that is meeting its commitment to invest two percent of GDP in defense. London will start asking more pointedly when others will start ponying up, as well.

1. No to a European army. There is an awful lot of tall talk in European capitals about how Europe needs “strategic autonomy.” And that’s problematic. There are only two real external threats to European peace and stability: Putin and the possibility of problems from the Middle East hop-scotching into Europe.

On its own, Europe doesn’t have the capacity to deal with either of these problems. There is no European security outside of the context of the transatlantic community.

Grandiose dreams of an all-EU defense can lead to nothing more than an expensive vanity project that adds little of substance to European security. Expect London to throw cold water on these wasteful proposals. Johnson will press our Europeans partners to focus their investments on a proven security arrangement: NATO.