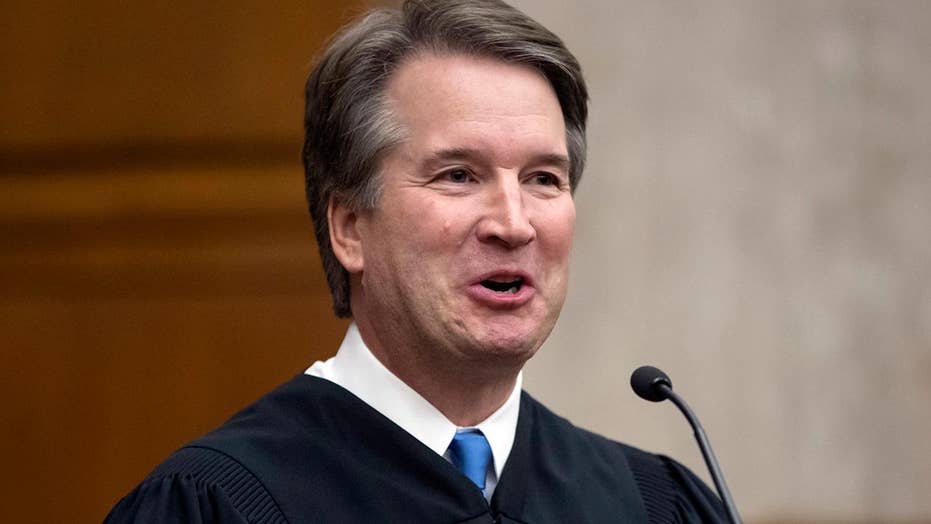 Democrat: 'Sparks are going to fly' at Kavanaugh hearings

President Trump fulfilled a campaign promise to the American people when he nominated proven conservative Judge Brett Kavanaugh to the U.S. Supreme Court. The Senate Judiciary Committee, which began its confirmation hearing for Kavanaugh Tuesday, should approve his nomination and send it on to the full Senate so this superbly qualified jurist can quickly take his seat on the nation’s highest court.

If confirmed, Kavanaugh – currently a judge on the U.S. Circuit Court of Appeals for the District of Columbia – will join Justice Neil Gorsuch as the second Trump appointee on the Supreme Court. In his short time on the high court Gorsuch has already shown himself to be an outstanding justice who is faithfully upholding the Constitution and serving the best interests of the American people.

While Supreme Court appointments naturally get lots of attention, it’s important to note that 44 judges nominated by President Trump have been confirmed by the Senate to the federal bench, with 88 more in the pipeline. Those 88 deserve swift confirmation as well. Together, the Trump-nominated judges can have an enormous impact on the future of our nation for decades to come, since federal judges have unlimited terms, serving for as long as they live or until they choose to retire.

Unfortunately, too many liberal activist judges have concocted all sorts of “rights” they claim are in the Constitution that are not really there at all. Instead of interpreting the Constitution based on the intent of the framers, they are in effect rewriting it with interpretations that would shock the men who wrote and approved the foundational document for our form of government.

As a result of some of these court decisions – along with actions by some far-left government officials and other developments in society – we’ve been losing our God-given rights that define us as a free people. We are steadily being expected to think, speak, write, and act in a prescribed manner in conformity with what is now called “political correctness.”

As I hope you learned in school, the principles on which our freedom was built are spelled out in the first 10 amendments to our Constitution, called the Bill of Rights. The first promises freedom of religion, freedom of speech, a free press and protects the rights of the people to assemble peacefully and petition the government when aggrieved. The other nine enumerate additional assurances to the people that their government will have restricted authority over them.

These rights are fundamental for a liberated people – and the only way to defend our liberties is at the ballot box. While federal judges are not elected, they are nominated by the president who we elect and must be confirmed by the elected members of the Senate. So in order to get judges appointed to federal district courts, appellate courts and the Supreme Court who will faithfully uphold our laws and interpret the Constitution, we must elect a president and senators willing to appoint such judges.

Unfortunately, nearly half of all voting-age Americans, including Christians, don’t even bother to vote. Shame on them all! Don’t they know that tyranny for us and our children is only one generation, or even one election, away?

Let me illustrate what can happen in America when left-wing activists become federal judges and fail to respect basic human rights as they have been understood historically.

In 2015 the Ninth U.S. Circuit Court of Appeals upheld an outrageous legislative measure that forced pro-life clinics to promote abortions and advertise where those services could be obtained. That became the law of the land in nine Western states for 32 months until the Supreme Court, bolstered by Justice Gorsuch, overturned the law this June in a 5-4 decision.

Also in 2015, the Supreme Court ruled 5-4 in Obergefell v. Hodges to redefine marriage as it had been protected in law and celebrated internationally for more than 5,000 years. By a single vote, an arrogant, imperious, justice and four colleagues on the Supreme Court overrode the will of the people and invalidated the laws protecting traditional marriage in 31 states. As a result, same-sex marriage is now considered a constitutional right.

This next example stands as one of the most outrageous assaults on parental rights in American history.

With administrative approval, a teacher at Mesquite Elementary School in Palmdale, California forced children, ages 7 to 10, to answer a questionnaire that included questions about such topics as frequency of thinking about having sex and thinking about touching other peoples’ private parts. Permission was neither requested nor discussed with parents.

The parents were rightly incensed and filed lawsuits. They were desperately trying to defend the innocence of their children, but to no avail. When the parents appealed their case, it went to (where else?) the Ninth U.S. Circuit Court of Appeals.

The federal appeals court ruled that there is no fundamental right of parents to be the exclusive provider of information regarding sexuality or education of their children, concluding that education serves higher civil and social functions. In other words: Parents, get lost.

As far-left judges who make rulings like these eventually step down from the bench through retirement and death, we need a new crop of conservative judges faithful to the Constitution to take their place.

Thankfully, for the first time since the courts began to run things in the 1960s, the judiciary is changing dramatically and some good things are starting to happen.

There is now hope for additional commonsense decisions to be handed down from the courts in the future. This is a matter for sincere prayer among those of us who have longed for relief from judicial tyranny.

Ours can be a lonely vigil unless defenders of the Constitution, and particularly Christians, stand shoulder to shoulder with us in this struggle.

We must vote to elect leaders who will defend what has been purchased with the blood of patriots who died to protect our liberty. We must not fritter it away on our watch! We and other conservative organizations are finally winning in the public square. This is no time to go wobbly.

This op-ed is adapted from Dr. Dobson’s August newsletter.

Dr. James Dobson is a Christian leader, author and psychologist, earning his Ph.D. from the University of Southern California in child development with a minor in research design. He is the founder and president of the James Dobson Family Institute, a nonprofit organization that produces his daily radio program, “Dr. James Dobson’s Family Talk.” Follow him @DrJamesCDobson.