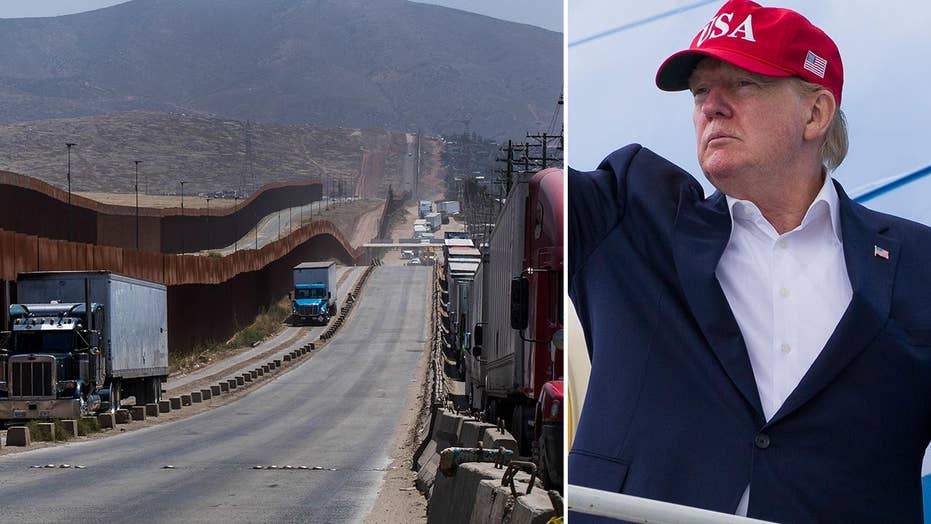 The White House is defending the president's hardline approach to diminishing the threat at the southern U.S. border; Kevin Corke reports from the White House.

It doesn’t look like the price of guacamole is going to skyrocket anytime soon. I hope all those who stockpiled avocadoes in anticipation of a U.S.-Mexico trade war throw parties real soon – before their stash goes bad.

In the wake of a new agreement on immigration, President Trump has indefinitely suspended his threat to slap tariffs on all Mexican exports to the U.S. That’s undeniably good news but there seems to be much confusion about what the deal actually entails.

That’s because almost none of the stuff peddled by the left-leaning media over the weekend is true. So let’s examine their claims, and clear the air.

Claim 1: The negotiations yielded nothing new.

False. The New York Times led the charge here, claiming that everything Mexico agreed to do had been hammered out months ago.

But if it were already a done-deal, why did Mexico feel the need to rush a high-level delegation to D.C. and plunge into marathon talks with Vice President Pence and other U.S. negotiators?

This creates a framework for grading the extent and effectiveness of Mexico’s actions to stem the tide of illegal immigration. While Mexico had previously agreed to implement some elements of the agreement (such as holding some of the illegal immigrants in Mexico while the U.S. processed their cases), the commitment to mobilize 6,000 Mexican National Guard personnel to the Guatemala border is new and most welcome.

The National Guard blends military (principally army and navy forces) with civilian federal police. This is a relatively new (since February 2019) force, and their command and control is still being worked out. Their deployment is not only substantively different from anything previously agreed to but it effectively commits Mexican President Andrés Manuel López Obrador to make control of illegal immigration a national security priority for his country. That, in and of itself, is a very big deal.

Claim 2: We have treated a friend unfairly.

False. By “we,” Trump’s opponents mean Trump. But Trump isn’t the only party responsible for solving the crisis at the border. Congress and Mexico have duties, too, and they weren’t taking them seriously.

Indeed, Congress has exacerbated the problem by refusing to act on numerous proposals to stem the flood of illegal border crossings and meritless refugee claims. Mexico, in turn, used this as an excuse for Mexico not doing more. “If the U.S. Congress couldn’t be bothered,” ran the reasoning, “why should Mexico?”

The fact is Mexico should care. Transnational criminal activity and mass migration are as big a threat to prosperity and security in Mexico as they are in the United States. The Mexican people get this. That’s why the crowd attending a mass rally in Tijuana cheered when López Obrador, “vowed to comply with the terms of the agreement assumed by his government to contain a surge of Central American migrants seeking to enter the U.S.”

Claim 3: This deal is a bellwether for a tariff deal with China.

False. These are very different situations. The situation with China is far more complex.

Yes, tariffs are an issue in both cases. But the trade war with China encompasses a web of issues ranging from intellectual property theft and cyber espionage to the activities of China’s state-owned enterprises and unfair trading practices.

Most serious observers believe U.S.-China trade relations are in for a wild ride. Markets and businesses are already starting to diversify their supply chains so American goods and services aren’t dependent on a friendly face in Beijing.

The economic tug of war with China could span years, with many ups and downs. Case in point: the White House just announced that Beijing will be hit with more U.S. tariffs if China’s President Xi doesn’t show up at the G-20 meeting in Tokyo to talk trade with Trump.

Claim 4: There will be trade wars as far as the eye can see.

Americans are capitalists. For us, free markets are a home game. Using tariffs beyond their legitimate and legally defined purposes is wrong.

Abrogating the constitutional authorities and responsibilities of Congress is detrimental to good governance. Tariffs are no more able to fix every foreign policy problem than cough syrup is able to ease every health problem.

Many Americans supported the president on tariffs because they felt his intentions were good. But, they also count on this president to get Washington out of the way so that the economy can grow faster. He did that by cutting taxes, red tape and excessive regulations. Jobs were created, wages rose, and unemployment plummeted.

But high tariffs conflict with that all-American economic agenda. Here is betting our president knows that, that he will always put growth and American jobs first, and – in the end – will prioritize free markets over tariff wars.