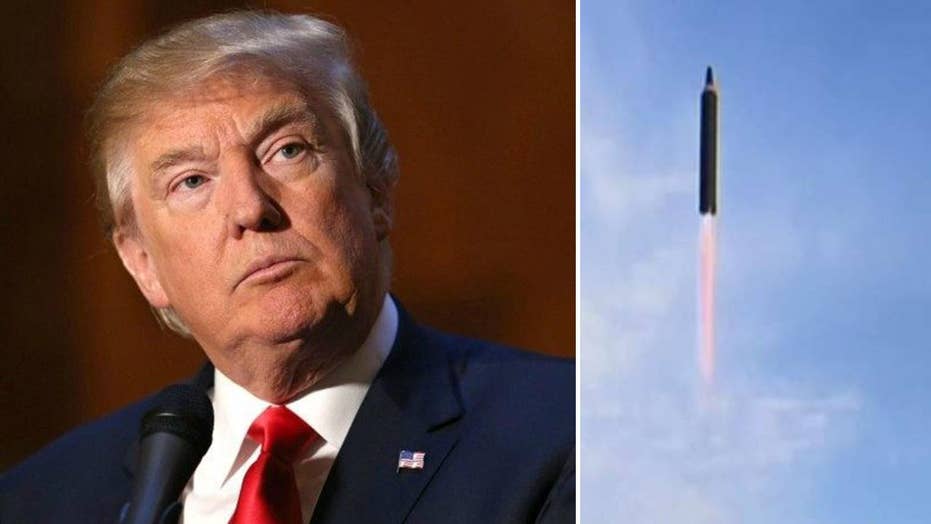 North Korea’s third successful launch of an intercontinental ballistic missile Wednesday should prompt President Trump to quicken the pace of his policy of putting “maximum pressure” on the North to give up its nuclear weapons.

In addition, President Trump should respond to the launch by placing harsher sanctions on Chinese banks and front companies propping up the regime of North Korean dictator Kim Jong Un, to drive home the seriousness of our objections to Chinese support of the North.

While critics will inevitably complain that economic sanctions the U.S. has slapped on North Korea since President Trump took office are failing to stop the North from making progress on its missile and nuclear weapons programs, such criticism is premature.

There was no way that 10 months of getting tough on North Korea by the Trump administration could compensate for more than 10 years of paralysis and concessions by previous American presidents. Even the toughest sanctions need time to work.

Over 20 countries have curtailed or ended commercial or diplomatic relationships with North Korea as a result of the Trump administration’s “maximum pressure” strategy.

This is because President Trump is the first U.S. president who has finally acted against China for its role as North Korea’s main backer.

But still, the Trump administration has not gone far enough and continues to pull its punches against Chinese banks that  are the key to North Korea’s continued sanctions evasion. Perhaps President Trump fears Chinese retaliation if he takes a stronger stand.

There should be no question that the U.S. goal of denuclearization of the Korean Peninsula is the correct path to pursue, especially when one considers how much more provocatively the North would act if the United States recognized it as a legitimate nuclear weapons state.

Worse, rewarding North Korea’s deception and blackmail in developing its nuclear and missile forces would all but eliminate the leverage Washington needs to stop Iran from acquiring  nuclear weapons of its own. If Iran sees North Korea rewarded for becoming a nuclear power, you can bet the Iranians will go nuclear next.

The Pentagon confirmed that North Korea had in fact launched an intercontinental ballistic missile Wednesday (Korean time) capable of reaching the entire continental United States. The new test was Pyongyang’s first missile test since Sept. 15, shattering the misguided hopes that this pause in provocations was a signal of North Korea’s openness to diplomacy.

The latest ICBM test brought to an end a 72-day pause in North Korean missile launches, which provided some relief after the blistering pace of tests earlier in 2017, including an average of one missile launch every two weeks from March through May.

Some have focused on the pattern of fourth-quarter reductions in missile testing, possibly related to the demand for resources needed for the harvest or to deal with harsh winter conditions.

Others hoped that North Korea was accepting a U.S. State Department proposal to stop tests for 60 days as a signal it was ready for direct negotiations.

But these theories always missed the forest for the trees. North Korea’s missile program continues even in the absence of visible tests. The nuclear weapons and missile programs are a strategic priority for North Korea and it will continue to impose any hardship necessary on its people to sustain and expand the programs.

The rush to see an olive branch when Pyongyang was merely hiding its capabilities is a lesson for advocates of negotiating a freeze of North Korea’s nuclear weapons and missile programs.

Freeze advocates say that it is the best way to reduce tensions and manage the threat, yet we now see that what looks like a pause in provocations may only have been a cover for continued work on ICBMs with even longer ranges.

Anthony Ruggiero, a Senior Fellow at the Foundation for the Defense of Democracies, was the non-proliferation advisor to the U.S. delegation to the 2005 rounds of the Six-Party Talks and spent more than 17 years in the U.S. government. Follow him @_ARuggiero.