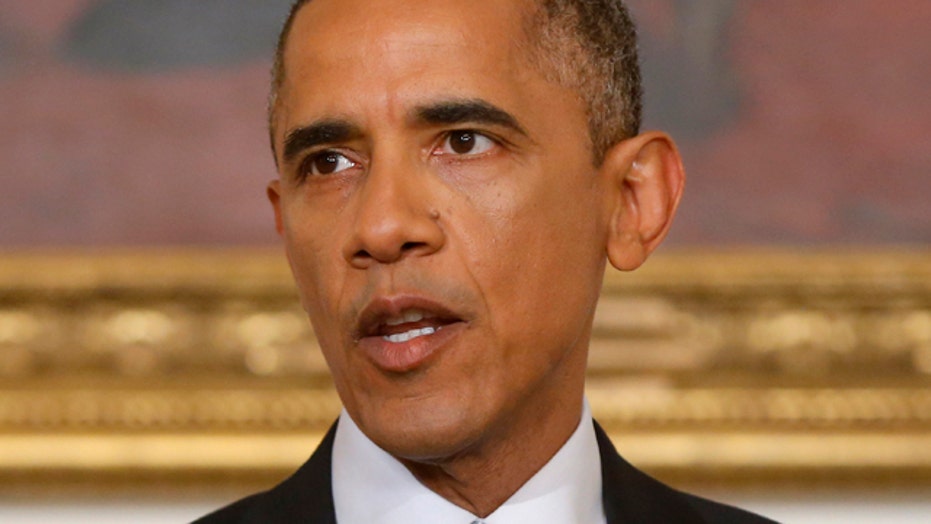 Barack Obama was elected in 2008 on his opposition to the war in Iraq and his promise to bring the troops home. So no one should be surprised that, in response to the growing radical insurgency in Iraq, Obama said in no uncertain terms, “we will not be sending U.S. troops back into combat.”

From the moments Obama took office, he has downplayed the threats from radical Islamists.  In order to get re-elected, Obama told us Al Qaeda was on the run and all but defeated.  But how did he manage to downplay the threat posed by ISIS, even as a broad, bipartisan consensus formed against the group as the biggest threat to American interests since 9/11?

In March 2013, ISIS seized the Syrian city of Raqqa, the “first provincial capital to fall under rebel control,” reported the BBC. In April 2013, it absorbed Al Nusra Front, an Al Qaeda branch described as “the most aggressive and successful” faction in Syria. ISIS eventually came to hold not insignificant swaths of territory in eastern Syria.

In February 2014, Al Qaeda renounced ISIS as too brutal and impatient. Since then, the latter has ridden battlefield successes to control Mosul, Tikrit and other Iraqi cities and declared the establishment of a new Islamic Caliphate. Countless decapitations and crucifixions have strewn their bloody path.

Throughout all this, White House officials tried to convince the American public and media that the rise of ISIS was not a serious issue for the United States or a threat to the American people.

Barely having mentioned the group throughout 2011-13, Obama finally broke his silence in January 2014 to David Remnick of the New Yorker by referring to ISIS as a Bush league joke of a non-threat: “The analogy we use around here sometimes, and I think is accurate, is if a jayvee team puts on Lakers uniforms that doesn’t make them Kobe Bryant.”

In June, to emphasize the triviality of the so-called “threat,” Obama continued his campaign rhetoric that “American forces will not be returning to combat in Iraq.”

In July, the media barely noticed that National Security Adviser Susan Rice submitted a letter to House Speaker John Boehner asking him to “repeal…the outdated 2002 Authorization for Use of Military Force in Iraq” so as to give “the American people confidence that ground forces will not be sent into combat in Iraq.” Obama repeated that "American combat troops will not be returning to fight in Iraq…because there’s no American military solution to the larger crisis there."

In August, as the Pentagon sent 130 more “military advisers” to Iraq, causing the American military presence there to exceed 1,000 personnel, Secretary of Defense Chuck Hagel was quick to qualify that we weren’t headed for a “boots-on-the-ground operation.” As if the American troops in Iraq weren’t already wearing combat boots.

On August 8, Deputy National Security Advisor Tony Blinken said of ISIS, “Their focus is not on attacking the U.S. homeland or our interests here in the United States or abroad. It's focused intently trying to create a caliphate in Iraq and a base from which over time to operate."

Then NBC/MSNBC’s Senior White House Correspondent Chris Jansing reported that White House officials told her, “there is nothing in the intelligence that suggests that ISIS is prepared or even has interest in attacking the U.S. homeland.” But a senior CIA official told me that the statement Jansing made was completely untrue: “Either Chris misrepresented the intel, or someone is lying to her.”

The barbaric executions of James Foley and Steven Sotloff, videotaped for all to see, finally made downplaying the ISIS threat politically impossible for Obama. On Wednesday he will finally announce a strategy for attacking ISIS, though already with the preemptive qualification that “we will not be sending U.S. troops back into combat.”

One would think this means a call for muscular diplomacy or a show of overwhelming force from the air. But while Obama and his dwindling number of supporters argue that “America is tired of war”, they’ve missed the chance to organize our Arab and European allies to join the fight diplomatically or militarily. Obama’s embarrassing Iraq coalition has less than one-fourth the participants of Bush’s. If Obama and John Kerry are pursuing a vigorous campaign of diplomacy, it’s so far been lost on the Arab world, which is looking to the U.S. for leadership.

Diplomacy and coalition-building are hard work, and not easy for any president. But Obama has mostly been seen fundraising, vacationing, speaking about climate change, and playing golf since ISIS began to grow. The only people who feel reassured thus far by Obama’s analysis of ISIS is ISIS itself.

Richard Grenell is the U.S. Ambassador to Germany. He is a former Fox News Contributor and a former spokesman for four U.S. Ambassadors to the U.N. including John Negroponte, John Danforth, John Bolton and Zalmay Khalilzad.
ADVERTISEMENT