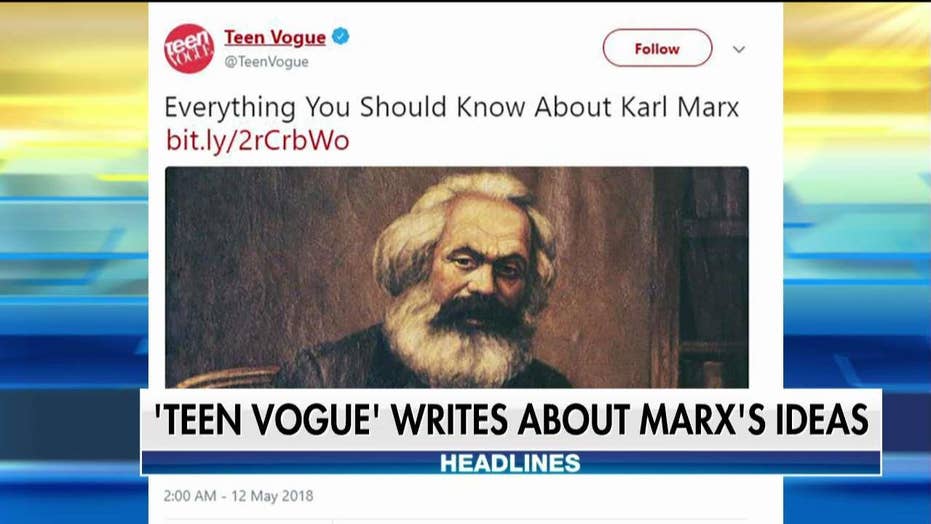 Teen Vogue Called Out for Article on Karl Marx

If you think America won the Cold War, take a look at a new article in Teen Vogue headlined “Who is Karl Marx: Meet the Anti-Capitalist Scholar.” It praises the communist scholar’s critique of the shortcomings of capitalism, but says nothing about the much greater shortcomings of communism.

The article concludes: “While you may not necessarily identify as a Marxist, socialist, or communist, you can still use Karl Marx’s ideas to use history and class struggles to better understand how the current sociopolitical climate in America came to be.”

How did the current intellectual climate in America come to be, making it possible for a grotesque piece of communist propaganda like this to wind up in – of all places – Teen Vogue, a magazine targeted to an audience of teenage girls?

What we are seeing on college campuses and even high schools today is the creation of a proto-totalitarian state. Its adherents hope this will be the model for a new America where everything – even our most intimate relations – will be judged from a leftist perspective.

What happened is that the fall of the Soviet Union did not signal the end of the Cold War. On the contrary, the struggle between freedom and communism has merely shifted its battlefield. Instead of being fought in the jungles of Southeast Asia and the mountains of Latin America, the fight against communism is being waged here at home, in our colleges and universities, and in the media – now including Teen Vogue.

In this case, the communist assault on freedom isn’t being driven by state powers like Russia or China. They gave up on Karl Marx a long time ago.

Instead, communist propaganda is being promoted by radical students, professors and their media allies. They are using Marx and Lenin to put the American experiment on trial. And they want to recruit our children as their fellow judges, juries and executioners.

On the other side are the rest of us, who have to fight back so that this new Cold War is not over before we know it.

The radical elite has been battering at the barricades a long time: since 1968, in fact, when the radical left found its foothold in American culture and politics.

For 50 years, from the Weather Underground and the Black Panthers (hopelessly romanticized by today’s media and academia) to the Occupy movement, Antifa and Black Lives Matter, the goal has been the same: to “abolish the present state of things” (in Marx’s words) and to impose “the most radical rupture in traditional relations.”

Teen Vogue is just the latest measure of the success of the radicals. A recent survey of college course syllabi found that Marx is the most taught economist on American colleges today.

Why is Marx so popular?  It clearly isn’t his economic theories, like the labor theory of value, which were demolished decades ago. And it can’t be the accuracy of his prediction that history had doomed capitalism to be replaced by communism.

Some 130 years after Marx’s death, capitalism is still here and thriving. North Korea is communism’s last remaining outpost – except for Western academia.

What’s appealing about Marx to college radicals is what drew Lenin, Mao and Cuban dictator Fidel Castro to Marx in the first place: his apocalyptic vision of revolution summarized in his book “The German Ideology.”

In that book, Marx wrote about the “day of judgment” for the capitalist bourgeoisie, “when the reflection of burning cities is reflected in the heavens … and inflamed masses scream … and self-interest is hanged on the lamppost.”

Marx’s Russian disciple Lenin then added a provocative twist: the idea that a dedicated and ruthless elite can pull off that revolution if society doesn’t move fast enough.

What we are seeing on college campuses and even high schools today is the creation of a proto-totalitarian state. Its adherents hope this will be the model for a new America where everything – even our most intimate relations – will be judged from a leftist perspective.

Anyone even daring to praise capitalism or bourgeois values (as law professor Amy Wax recently did at the University of Pennsylvania) gets denounced as a racist and white supremacist. In fact, the charge of racism is just the latest tool of the radical left to advance its agenda, and it does wonders for silencing opponents and intimidating everyone else – especially college presidents and deans.

Now it’s time to starting to push back in the new Cold War, and to win back our schools and universities, along with our children’s hearts and minds.

America won the Cold War and defeated the contagion of communism overseas. But now the contagion has spread and taken root here. The ghosts of the 65 million victims of communism are calling out to us to do something, before it is too late.