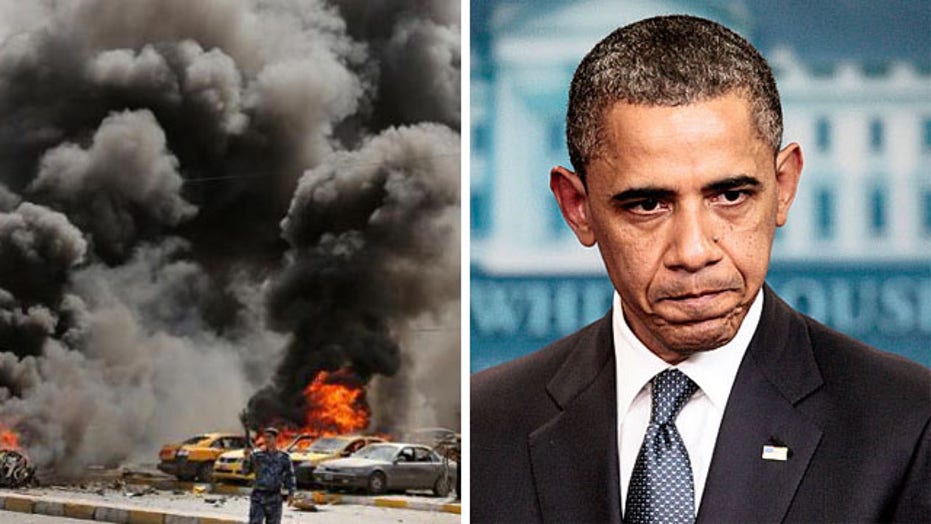 Did the crisis in Iraq catch Obama by surprise?

Mixed messages from the president on global security

President Obama’s psychology explains recent events that show America to be in retreat from our adversaries.

One such event was the indefensible swap of five Taliban prisoners held at Guantanamo Bay for captured Army Sergeant Bowe Bergdahl. The second is the extraordinary gains terrorists are making in Iraq.

The president, even before taking office, showed his underlying, perhaps partly unconscious, contempt for America and its historic place as an international force for freedom.

President Obama is the man who embarked on an apology tour after being elected to his first term in office, telling other nations he recognized that America had done wrong around the world.

President Obama is the man who struck at the heart of free enterprise and the American economy by telling American entrepreneurs they should not take too much pride in their accomplishments because they did not build their own businesses.

President Obama is the man who is married to a woman (Michelle Obama) who stated that she had felt no pride in America until her husband was elected to lead the country. That’s how wrong-minded she considered our nation – how unworthy.

So it should not be shocking – at all – that I believe the exchange of Bowe Bergdahl for five terrorists was, psychologically speaking, a no-brainer for the president. That’s because Bergdahl had reportedly questioned America’s mission in the Middle East and may have even deserted his unit. And President Obama identifies, at a deep, deep level, with that position.

All six people released – the five terrorists and Bergdahl – were somewhere on the same spectrum as the president with regard to seeing America as a misguided power in the world.

And I believe that sealed the deal.

What the president has said and done before and since taking office suggests it would have been a more difficult decision for him to exchange five terrorists for an American hero who believed in the manifest destiny of America to spread freedom and democracy around the world.

When the leader of the superpower in the world most affiliated with freedom, including freedom of religion, believes America is based on a flawed Constitution, has been a bully and should apologize for its historic actions around the globe, he is heard by forces of evil and tyranny – like radical Islam and the Taliban. And they are empowered and emboldened.

Why wouldn’t they be?

That’s why the president’s psychology not only paved the way for the inexcusable deal to free Bowe Bergdahl. That’s why his psychology is also fueling the potential takeover of Iraq by terrorists who want to destroy America.