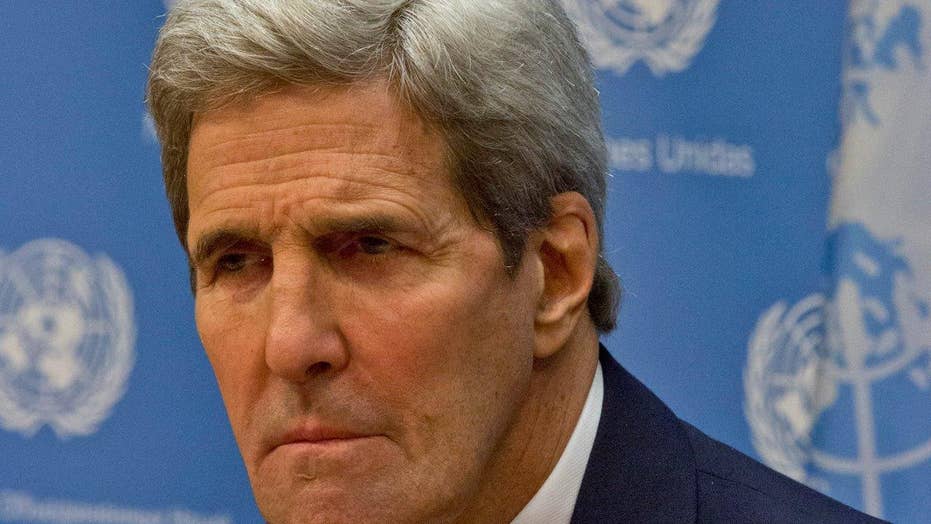 White House criticized for giving into Iran to build legacy

2015 will go down as the Iranian regime’s “favorite year” since 1979, when the late Ayatollah Khomeini--flown in like royalty from his Paris exile-- toppled the Shah. Much to the shock of many, instead of thanking the West, the Ayatollah had his followers invade embassies and take 66 American diplomatic personnel hostage.

The Ayatollah is long gone but his legacy of hatred of America and Israel; of terrorism by proxy; of diplomatic duplicity lives on.

Today, Tehran is doing its best to disabuse anyone who thought that the P5+1 international nuke deal will produce any change in the regime’s behavior.

No sooner had the disappearing ink dried on the deal, when alarming news came that Tehran had already violated the agreement by testing two long-range missiles. This was a dual success for Iran’s Revolutionary Guards. Technically, Iran now has the capacity to deliver miniature atomic warheads that could target Israel, Saudi Arabia and Europe. Equally important is that Tehran has tested the international community’s resolve and the world blinked again, and sanctions will be lifted next month.

Now the Iranians may have upped the ante again. The cornerstone of the P5+1 accord is that Iran will dismantle centrifuges before the lifting of sanctions. But in a December 18th interview in The New Yorker, Iran’s Foreign Minister Javad Zarif, who personally negotiated the deal, hinted that the sanctions must go first:

"Where does the Iran nuclear deal stand? What is your timetable to complete steps pledged in dismantling part of the program?
Zarif: We're not dismantling anything. We are uninstalling some centrifuges and reconstructing the Arak reactor, modernizing it...The remaining activities that we need undertake will not take more than several days, less than two weeks.
"Is there a projected day for implementation?
Zarif: Well, we need to resolve still some political issues...There are obligations on the other side that we have to make sure are implemented before we start the final stage of our implementation…

And what signal is the U.S. sending Tehran?

The Wall Street Journal reports that Secretary of State John Kerry wrote to his Iranian counterpart on Saturday to assure him the visa changes approved by Congress last week won’t undermine business opportunities in Iran. Citing the State Department’s ability to expedite visa applications, Kerry also said the White House had the power to issue waivers to exempt individuals from the new travel laws!

“I am also confident that the recent changes in visa requirements passed in Congress…will not in any way prevent us from meeting our” commitments under the nuclear deal, Kerry wrote. “We will implement them so as not to interfere with legitimate business interests in Iran.”

Tehran has sent out another broadside, this one aimed at denigrating the 6 million Jewish victims of the Nazi Holocaust. It has announced the Third International Holocaust Cartoon Contest. First launched in 2006 in response to a Mohammed cartoon controversy, previous “winners” included a cartoon showing grinning soldiers above a freshly dug mass grave in which they are placing not real corpses, but merely paper cut-outs suggesting that there were no real Holocaust victims.

The grand prize winner, a Moroccan entry, showed an Israeli crane building a wall around Jerusalem’s Dome of the Rock on which there was the image of the infamous Auschwitz death camp. Tehran also broke new media ground by introducing for children animated versions of the hate on Holocartoon.com.

In 2007, Iran even filed a complaint with the United Nations Human Rights Council against those who do not deny the Holocaust. Iran was also the only country to attack U.N. Resolution 61/255 against Holocaust denial, which the United Nations General Assembly passed in 2007.

The regime’s latest move is not only designed to alarm and enrage Israel and the Jewish people, but to also expose the hypocrisy of European nations including Germany. These nations lead International Holocaust Day commemorations each year, but utter nary a peep of protest against a Mullahocracy that serially denies the Shoah, lest they be barred from pursuing lucrative economic deals with Iran.

With no price to pay for its past bad behavior, Tehran should have a very good 2016. True, the price of oil has plummeted, but a $150 billion windfall guaranteed by President Obama should provide the economic cushion for the regime at home, with a few billion left to continue to spread their hate and terror abroad.