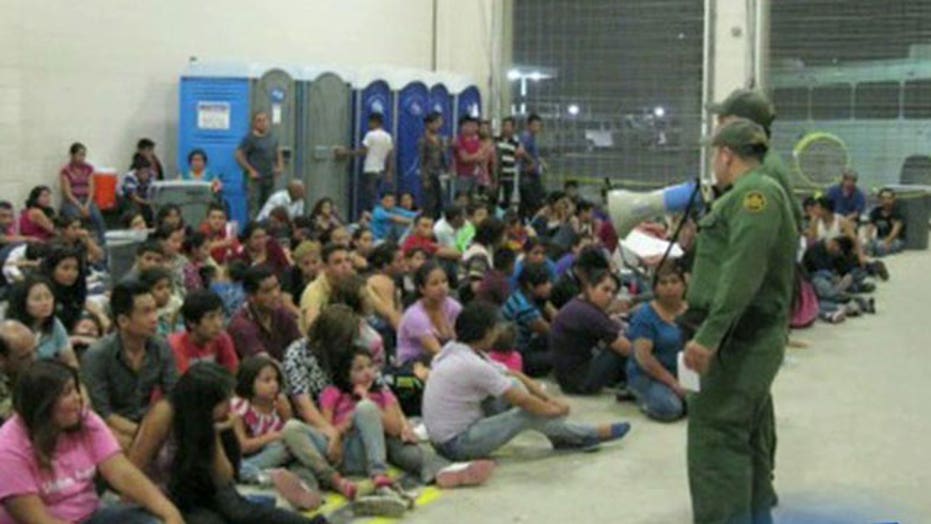 Are the thousands of illegal immigrant kids housed in detention facilities happy and well fed -- or are they living in disease-infested compounds shrouded in secrecy?

Well, it depends on who you ask.

The Department of Health and Human Services (HHS) seems to think the children coming across the southern border are remarkably healthy. It's a sentiment shared by BCFS -- the Texas-based agency formerly known as Baptist Child & Family Services contracted to run camps at Lackland Air Force Base in San Antonio and Fort Sill in Oklahoma.

More than 7,000 children have been processed through the two camps, according to a BCFS official. They allege that only 119 children have been treated for lice, 22 for scabies, and one for the H1N1 Flu. BCFS says the most common illnesses seen at Lackland are fever, headache, upper respiratory cold and ingrown toenails.

However, at least a half dozen anonymous sources, including nurses and health care providers who worked at Lackland, allege that the government is covering up what they believe to be a very serious health threat.

Several of my sources tell me that tuberculosis has become a dangerous issue at both the border and the camps.

"The amount of tuberculosis is astonishing," one health care provider told me. "The nurses are telling us the kids are really sick. The tuberculosis is definitely there."

Texas Department of State Health Services Commissioner David Lakey, M.D. says state health officials have seen only three cases of tuberculosis, the Associated Press reports. One of my sources with close ties to the Texas HHS tells me all three cases were reported in Austin.

However, nurses at Lackland in San Antonio, said they know of at least four teenagers in their camp who have tuberculosis.

"The nurses are telling us the kids are really sick," the source told me. "The tuberculosis is definitely there."

My source said there are children showing classic tuberculosis symptoms -- spitting up blood, a constant cough and chest pain.

BCFS officials deny that any child at Lackland has been diagnosed with TB and the state health commissoner downplayed the health threat. While confirming their had been three cases of TB, Lakey said it was not unusual, the Associated Press reported.

Dr. Marc Siegel, a professor of medicine at New York University's Langone Medical Center and a Fox News A Team medical contributor, said tuberculosis appears to be spreading through several counties in southern Texas. He told me that some counties are reporting twice the usual average number of cases.

"Some of the tuberculosis that comes from Central America is drug resistant," he told me. "It's not easier to spread but it is harder to treat. I'm concerned about that."

And while, TB is not that easy to spread, he warned that all those children living in close quarters could be a ticking time bomb.

"It is a disease that needs to be carefully monitored and screened for -- something that is not possible under the current circumstances," Siegel said.

HHS released a statement neither confirming nor denying what the nurses are telling me: "When unaccompanied children come into the Department of Health and Human Services program, they are given a well-child exam and given all needed childhood vaccinations to protect against communicable diseases,” the statement read. “They are also screened for tuberculosis, and receive a mental health exam. If children are determined to have any communicable disease or have been exposed to a communicable disease, they are placed in a program or facility that has the capacity to quarantine."

This is the same HHS that previously denied there were any cases of scabies. They make it sound as if there are very few health problems among the illegals. They even downplay the lice epidemic -- just 119 “officially confirmed” cases.

“They are lying,” one nurse told me. “We treated that many kids with lice on a given day. We would put 20 kids in front of us – 10 in each row. You could see the bugs crawling through their hair.”

Another former staff member told me it was like working in a giant emergency room.

“They had children in the infirmary that had been there several days,” the former staffer told me. “You were on your feet nonstop. They had chicken pox, measles, and there was a concern strep was spreading.”

BCFS denied any of the children had the measles. They said public health authorities “have inspected our facility and had access to freely converse with our medical staff and children.”
Health care providers tell me the Lackland facility is like a giant orphanage. And while lice and scabies abound -- they warn that the bigger problem lurking is tuberculosis.

"Lice and scabies are fixable," a nurse said. "TB is the real problem here."

It's impossible to know the full extent of the communicable diseases that have come and are coming across the border. Nurses and other care givers tell me they've been told to keep their mouths shut. Those caught divulging information are subject to immediate dismissal -- and all my sources said they were told they could also be arrested.

BCFS won't even allow random inspections of their facilities by the media or members of Congress.

“There is no excuse for denying a federal representative from Oklahoma access to a federal facility in Oklahoma where unaccompanied children are being held,” the congressman said in a statement.

Bridenstein said he was told that unannounced visitors are not allowed – even if they are elected officials – and that he would have to make an appointment to visit the facility.

“What are they trying to hide?” he asked. “Do they not want the children to speak with members of Congress?”

He was told to come back for a pre-arranged and heavily scripted dog-and-pony-show tours -- but those events were fact-free fact-finding missions. I’d say the congressman has a better chance of getting into GITMO.

BCFS blames HHS for the shroud of secrecy. Sources within the organization tell me they’ve been ordered not to talk to the media and not to let anyone inside the camps.

In spite of everything my sources are telling, a BCFS representative describes the facility at Lackland as a place where children are happy, well-fed and engaged in daily activities.

Meanwhile, several San Antonio pastors who dropped by unannounced at the Lackland camp, have shared with me a rather unsettling discovery. The ministers told me the facility was under heavy guard from security personnel.

To be honest, we have no idea what's going on at that fenced facility but I have a feeling it's not good.