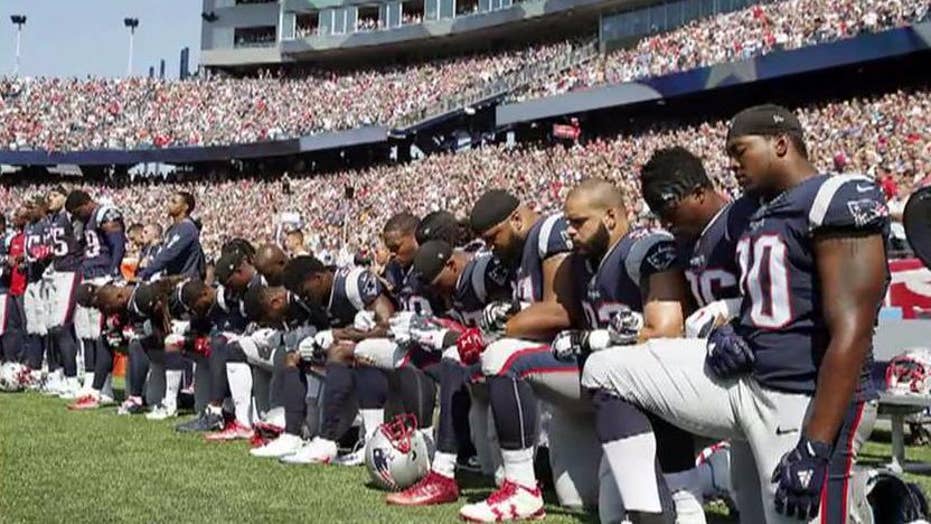 Rhetoric heats up on both sides of issue; reaction and analysis on 'The Five'

When I was eight years old “football” Sunday was more important than “cartoon” Saturday.

When I was 48 years old I played my last alumni football game.  I am a disabled vet with a broken vertebrae and several herniated discs who walks funny like most old football players – but it was worth it to me, even playing against men more than half my age.

That’s what I call love of sport and passion for football.

Memo to the NFL players: you have ruined Sunday football for me!  And you clearly don’t understand the people who make you stars and make you rich.

I know your protest is more than just some misguided political movement, misplaced protest, or bogus facts. It’s bigger than just football. You players decided to disrespect our country and her flag. You decided to insult your customer.

Sundays are more than just another day for us. We make it an event with football as the centerpiece.  Most of us work 40-70 hours a week just to make the Sabbath extra special.  We pay $300 just for the pleasure of following “our” team on NFL Sunday Ticket.  We spend money on tickets, memorabilia, and gifts.  We listen to and watch those senseless talk shows just because of NFL football.

In other words we spend our hard earned money and valuable time on your league.  NO MAS!

But I’m done with you NFL!  There is room for repentance, redemption, and forgiveness.  However, you need to understand that my God and country far exceed my desire to watch Sunday football.

You should be concerned, NFL.  People may decide to do other things on football Sunday, like me.  Maybe they will stay at church longer.  Help people in their community.  Take their special gal out for brunch.  Take the wife and dog out for a Sunday drive.  Once you lose them, they’re gone.

As for me, I’m cancelling my NFL Sunday ticket, TODAY!  The next check I write to St. Jude’s, there will be extra money.

Dan McLaughlin is a Retired Elementary School Teacher who has spent the last 25 years promoting positive parent involvement. He says that too much of the responsibility of educating our children is given to schools. How can parents change that trend? In "God and Country Parent's Guide, Bringing Patriotism and Scripture back to Education", he provides these answers.