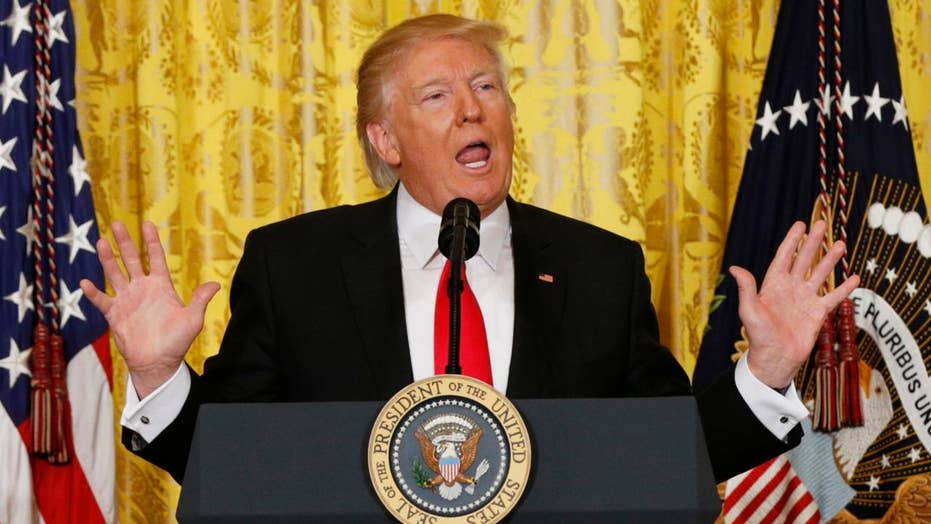 Trump tries to get back on message in epic news conference

John Roberts on why the president teed off in the presser

Over the past few months, America has lurched from partisan warfare to the cliffs of an existential crisis.

Multiple reports show that my former colleagues in the intelligence community have decided that they must leak or withhold classified information due to unsettling connections between President Trump and the Russian Government.

Said an intelligence officer: “I know what's best for foreign policy and national security… And I'm going to act on that.”

Some of us might applaud this man, including a few of my fellow Democrats. In their minds, this is a case of Mr. Smith Goes to Langley to do battle against a corrupt President Trump.

One small problem. The intelligence officer quoted above was actually Aldrich Ames, a CIA traitor whose crime of treason in the 1980s and 1990s resulted in the compromise of more than 100 assets. Many were tortured and executed as a result.

Ames’ flawed logic is eerily similar to that of his present-day colleagues who are engaged in a shadow war with their commander in chief. They, too, have decided that their superior judgment is more important than following the law.

For the sake of argument, however, let’s assume that these officials are somehow different than Ames. Let’s suppose that they have compelling pieces of information that indeed suggest Trump or his staff have committed treason.

When you’re trained as a spy, you’re taught how to handle these kinds of situations. Upon learning the information, it gets tightly compartmented (restricted) and sent to the Department of Justice or Congress for investigation. If the evidence is found to be credible, the constitution makes clear what happens next: impeachment.

That’s how American democracy should work.

And that’s precisely how it has been working. According to former Vice President Biden, there’s been an on-going investigation into the alleged connections between Trump and Russia. All of us should take heart in knowing that the system is functioning exactly as designed.

However, some of America’s spies are deciding that that’s not enough. For reasons of misguided righteousness or partisan hatred, they’ve taken it upon themselves to be judge, jury, and executioner. They have prosecuted their case in the court of public opinion, with likeminded media outlets such as CNN, The New York Times, and the Washington Post serving as court stenographers.

Elected by no one, responsible only to each other, these spies have determined that Trump is guilty of high crimes and misdemeanors.

Days ago, they delivered their verdict. According to one intelligence official, the president “will die in jail.”

I understand how this might feel appealing to deeply partisan Democrats. After all, I didn’t want Trump to win either. But the solution to fighting this subpar president cannot be encouraging a network of spies to tip the scales back in our political favor. We must instead let the system continue to work, as it has, and make our case to the American people during future elections.

If you’re not convinced, imagine the consequences of letting spies decide not just Trump’s fate but other political winners and losers too. Imagine how they might treat our candidates next.

Flash-forward to November 4, 2020, where Senators Bernie Sanders and Elizabeth Warren have defeated Donald Trump and Mike Pence for the White House. Democrats will celebrate in the streets. The liberal spies will smile.

Conservative spies, however, will take a darker view. To them, their liberal colleagues will have gotten away with political murder. They’ll be looking for revenge.

Welcome to the new America. It’s now their turn to burn democracy down. And they’ve got the tools and motivation to do it.

This is the slippery slope of political tribalism that, up until a few months ago, I would have thought impossible in America. Certainly it happens in third world nations but not here. I was trained to believe that we were exceptional.

In the culture of America’s spies, you live and die by a set of rules. One of them is a sacred pledge of allegiance to the constitution and commander in chief. Spies may not like a president or their policies but they must salute their leader nonetheless. If they cannot, they are told to resign.

Spies also take a vow of secrecy, specifically to keep classified information hidden from anyone who doesn’t have an authorized need to know. It’s a commitment one keeps for a lifetime. And should that vow be violated, the consequences are dire. Prison time. Colleagues and informants killed. Enemies emboldened. The country less safe.

Spies also accept and embrace a final rule: there must be an unbreakable wall between government workers and the democratic process.

Because many spies have access to powerful tools that, if used improperly, could cause incredible damage to the nation’s stability. Accordingly, clandestine officers have a special covenant with the American people – codified by the Hatch Act – that limits their participation in politics.

During my time as a CIA officer, I quickly learned why all these rules were in place. I read people’s emails. I listened to phone calls. I recruited assets that told the dirtiest and most embarrassing of secrets. I came to realize that my power was both an awesome responsibility and, at times, wickedly seductive.

Some of us faltered in our commitments. I remember colleagues who believed themselves above the rules, conducting quiet investigations into cheating wives or ex-boyfriends. They were eventually discovered and rightfully thrown out. They had demonstrated an inability to handle the burden of power.

And that is precisely what we are experiencing today. The spies who are plotting against President Trump are breaking U.S. laws. They’re violating their oaths. And they’re committing treason to remedy (perceived) treason.

They likely don’t see it that way, of course. But, then again, neither did Aldrich Ames.

With luck and aggressive investigations, these renegade spies will join their fallen colleague at the Allenwood Correctional Facility for the remainder of their lives.

I look forward to watching the gates forever close behind them.