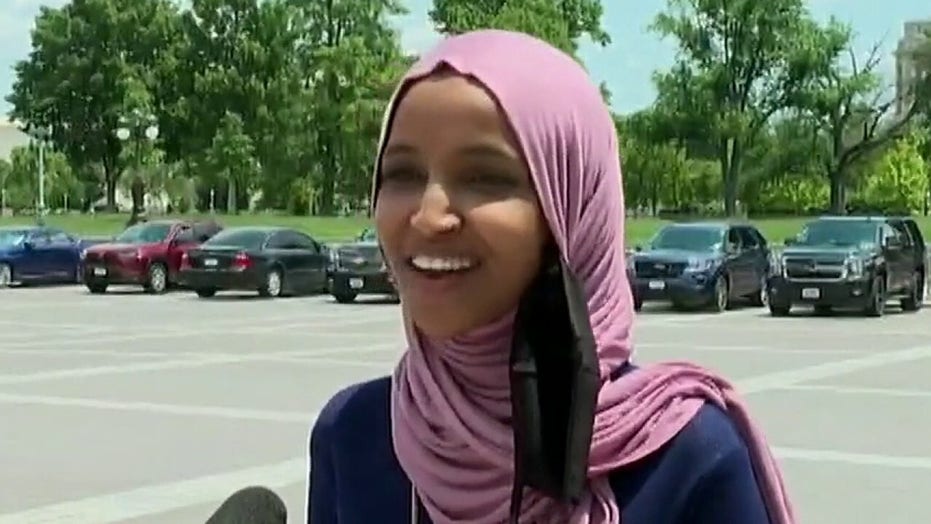 Rep. Ilhan Omar, D-Minn., is so far-left and so focused on grabbing the national spotlight with her radical and dangerous proposals that many Democrats in her district are eager to replace her, which explains why she faces a tough primary fight Aug. 11 against two challengers.

Describing all of Omar’s fringe proposals would take a book. Among the most harmful is one she has introduced with Rep. Bonnie Watson Coleman, D-N.J., that would create a massive new budget-busting program to give millions of Americans make-work government jobs.

Coming on top of trillions of dollars in economic stimulus spending already approved by Congress and expected to be increased to deal with the coronavirus pandemic, Omar’s proposal would send the federal deficit soaring to almost unimaginable heights, requiring massive tax increases at some point to avert national bankruptcy.

If Democrats keep control of the House and capture the Senate and White House in the November election and enact a jobs guarantee program like this, our economy might never fully recover from the damage.

Omar and Watson’s proposal is called the Workforce Promotion and Access Act. It would permit the U.S. Department of Labor to develop a jobs guarantee program that would provide grants to states and localities where unemployment is twice the national rate or higher than 10 percent.

“The resulting jobs, targeted to local needs like child- or eldercare and infrastructure, would be paid at least $15 per hour and ensure every adult aged 18 or older is eligible,” according to a statement issued by Omar’s congressional office.

“This program is the type of bold solution our country needs to lift up workers, broaden prosperity, and improve communities,” Omar said.

Providing people with access to jobs in areas that are struggling economically might sound like a good idea at first glance, but on closer examination it is deeply flawed and extraordinarily harmful.

Creating a jobs guarantee program that would bankrupt our country, create unsustainable deficits, slow economic growth, and increase the government’s control over the labor market is one of the worst ideas radical Democrats have proposed

Jobs guarantees effectively put government in charge of the labor market, by establishing baseline wages and benefits. Wherever there is a jobs guarantee program, private employers must pay at least what the government is willing to offer its employees and prospective employees through the jobs program.

Because government does not need to worry about profits or operating efficiently, and because it often runs huge deficits, it has a large advantage over every business in the private sector, making it incredibly difficult for private companies to compete. That means job guarantees distort markets and drive employees out of productive businesses and into government jobs that might not even be needed.

The proposal backed by Omar would be especially harmful, because it would incentivize local and state governments to enact policies that would increase unemployment rates. Doing so would provide them with access to job guarantee grants from the federal government.

Over the long run, a jobs guarantee would also encourage governments to take over more parts of the economy. As more Americans sign up for the jobs program, additional new services would need to be offered by government to ensure its growing number of employees have work to do.

This would slow the growth of the entire economy, because government is notoriously wasteful and inefficient. Take Amtrak, for example. In its nearly 50 years of operation, it has never broken even. In fiscal year 2019 it had one of its best years in history, but still lost more than $29 million.

Job guarantees have become increasingly popular among Democrats as the party has shifted further to the left in recent years.

Rep. Alexandria Ocasio-Cortez, D-N.Y., a self-described socialist and close ally of Omar, included a federal jobs guarantee in her radical Green New Deal proposal, which was sponsored in the Senate by far-left Sen. Edward Markey, D-Mass.

Of course, neither the federal government nor any state in New England has money available, even if taxes are raised, to pay for a costly jobs guarantee. The American Action Forum estimates the jobs guarantee included in AOC’s Green New Deal would cost from $6.8 trillion to $44.6 trillion over 10 years. No program in American history has ever been so expensive.

Creating a jobs guarantee program that would bankrupt our country, create unsustainable deficits, slow economic growth, and increase the government’s control over the labor market is one of the worst ideas radical Democrats have proposed — and that’s saying a lot.

Congress should instead enact policies that encourage people who lost their jobs due to the pandemic to get back to work in regions where it is safe to do so.

Lawmakers should work with the president to reduce regulations to spur growth in key industries, and lower taxes for businesses that hire new employees or rehire existing employees. Programs like this will help our economy recover and reduce unemployment created by the coronavirus pandemic.

Cutting government spending to offset costs associated with tax cuts, rather than creating new big-government programs, would be the right path forward.

Americans don’t need an impossibly expensive far-left government program to turn our economy around. In fact, many of the programs being proposed now by Democrats like Omar, including her jobs guarantee, would have the opposite effect. These programs would stunt growth and make an economic recovery all but impossible.

A strong private sector is the key to our prosperity and has made American the envy of the world. It can do this again as we recover from the pandemic.

Socialism and communism have been economic disasters in every country foolish enough to adopt these systems, bringing needless suffering to billions of people around the world. The same would be true if make-work government employment proposals like those advanced by Omar and Ocasio-Cortez are enacted into law.