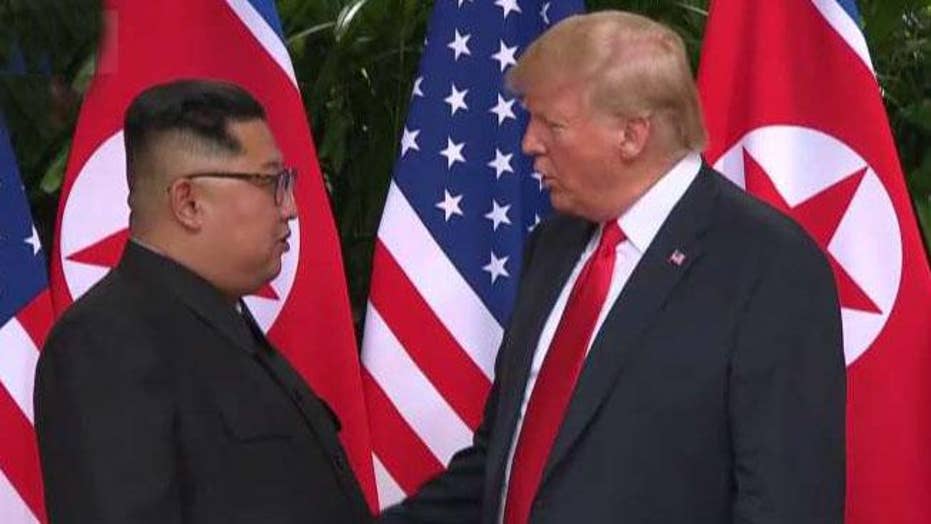 What will be agreed to at the second US-North Korea summit?

Former National Security Council chief of staff Fred Fleitz weighs in on what can be expected to come out of President Trump’s next meeting with North Korean President Kim Jong Un.

No matter what President Trump says or does when he holds a second historic summit with North Korean leader Kim Jong Un on Wednesday and Thursday in Vietnam, he will never satisfy his Republican and Democratic critics.

However, if Trump sticks to his realist instincts – above all else, working in a pragmatic manner to preserve his America First agenda – and if Kim is serious about reaching some kind of nuclear arms control agreement, the odd couple could make history in Hanoi.

And who knows, Trump – or perhaps Trump and Kim – might even be awarded the Nobel Prize.

None of this will be easy.

Kim’s father and grandfather – who ruled North Korea before him – have a history of stringing along past U.S. presidents of both parties with assurances of cooperative behavior and then breaking their promises.

The North has invested heavily to develop a small nuclear arsenal that Kim is not eager to give up, seeing it as his best guarantee against any U.S. effort to attack his impoverished communist nation.

President Trump’s critics on the left and right portray him as naïve and desperate to reach some sort of agreement – any agreement – with Kim to boast about in his expected re-election campaign next year.

While Kim clearly believes that nuclear weapons are his best insurance policy against a future American attack, Trump must convince the North Korean leader that the exact opposite is true: only denuclearization will ensure North Korea’s security.

Will Trump succeed in getting a real agreement that at minimum moves North Korea significantly closer to the U.S. goal of denuclearization of the Korean Peninsula? Or are Washington and Pyongyang destined to be enemies far into the future, with no hope of the North peacefully giving up its nukes?

I have faith in President Trump – at least when it comes to this crucial national security issue. While I am a proud registered Republican, I can’t say I always agree with the president, nor do I embrace some of the more outlandish and fiery rhetoric he has displayed when it comes to North Korea.

But the good news is that Trump has a unique set of traits that the foreign policy elites in Washington lack: a clear imagination to see things differently, with a knack for applying his successful business skills to the hard knocks arena of global politics.

Combined with President Trump’s willingness to try new approaches in international affairs that others think are crazy, he has taken the old playbook on how to handle the hermit kingdom and lit it on fire.

The U.S. president’s imagination and principled realism could make history in the coming days. I believe there is a clear blueprint to usher in a new era of peace on the Korean Peninsula, protect our allies in the region and offer a real chance at seeing North Korea give up its nuclear weapons.

Building on the Singapore summit last June, here are some steps that could make the summit in Hanoi a success:

First, President Trump needs to make Kim understand that America is not North Korea’s enemy, has no desire to overthrow Kim and his regime, and can be trusted.

To do this, President Trump must set the conditions whereby Kim feels comfortable enough that he can begin the process of denuclearization.

While Kim clearly believes that nuclear weapons are his best insurance policy against a future American attack, Trump must convince the North Korean leader that the exact opposite is true: only denuclearization will ensure North Korea’s security.

If Trump and Kim agree to sign a simple political declaration ending the Korean War once and for all, tensions between the two nations could ease dramatically.

Kim would have the proof he needs to not only trust our intent but to go back to his own people – especially those in the military and in his leadership circle – and say America no longer has any hostile intent and our relationship has fundamentally changed.

A peace treaty would also enable Trump to claim a historic win. The U.S. president should offer a treaty with no preconditions.

After all, a peace treaty would not really be a U.S. concession. It would simply acknowledge the obvious fact that the Korean War ended with an armistice in July 1953. That was long before Kim was born and when President Trump was just a 7-year-old boy.

Second, U.S. officials must ensure we have the means to communicate with the North Koreans – especially if another crisis erupts in the future.

To do that, both sides should establish small liaison offices in each other’s capitals. This would allow for near-instant communication and understanding to ensure that important messages do not take days to travel from one part of the world to another.

Many will argue this is a type of de facto diplomatic recognition of the North Korean government. Maybe that is true, but with North Korea potentially having the capability to strike the U.S. with nuclear weapons, being able to understand the thinking of that nation’s leaders is more important than ever.

The establishment of liaison offices would also allow the North to get a better window into our own diplomatic strategies and national security thinking, helping ensure that Kim and his regime do not misperceive our intent.

There is no weakness in wanting to have a dialogue with those you have differences of opinion with in order to avert an armed conflict. That’s why we have diplomatic relations with Russia, China and many other nations we disagree with.

Look at it this way: North Korea was created in 1948, when Korea was divided into North and South. The U.S. has never had diplomatic relations with the North and even fought a war against the nation for three years. But a strategy of using diplomatic isolation to topple the regime hasn’t worked for 71 years – so why should we think continuing this strategy will work now?

Third – and crucially important – the world must see the first steps towards the North giving up its nuclear weapons.

The formula to do this is well know by now. Kim has already said he would dismantle his Yongbyon nuclear facility if Washington offers “corresponding measures” – meaning relief from economic sanctions crippling the North.

The Trump administration has only recently began to move away from the idea that no sanctions relief can be granted until full North Korean denuclearization is complete.

President Trump needs a way to take pressure off Kim without getting a political shellacking back in the U.S. by critics who say he is making a gigantic concession for meaningless promises by Kim.

That’s where South Korea’s President Moon Jae-in comes in. Moon told Trump he would move forward quickly on inter-Korean economic projects that would be worth tens of billions of dollars to the North to get Kim to give up his nuclear weapons.

Considering North Korea’s economy is only worth $16 billion – half the size of Vermont’s – an economic shot in the arm would be a game changer for the Kim regime. My bet is that the North would jump at the opportunity and all sides would clearly get something they want.

Finally, we should not forget about the more than 7,000 brave American warriors who are still “unaccounted for” from the Korean War.

In addition to these Americans missing in action in the long-ago war, there are also many North Korean soldiers whose status was never resolved. Both nations should step up efforts to solve these cases once and for all.

Washington and Pyongyang should form joint teams that can work together and excavate the battlefields and areas where it is likely remains can be found.

History tells us this can build important trust between nations and heal the wounds of an old war. This is what happened when Vietnam and the U.S. embarked in such efforts before diplomatic relations were restored.

History proves that nations that inherently don’t trust one another have a long way to go to bridge the gap and achieve a lasting peace.

It is in both the U.S. and North Korea’s interest to end a state of war between us that – in the worst-case scenario – could erupt again with nuclear weapons, killing millions of people.

Even those of you who oppose President Trump and want him out of the White House as soon as possible should be rooting for his success at the summit. If he can somehow eliminate the North Korean nuclear threat in exchange for economic and diplomatic concessions, that will be a victory for the American people and for people around the world.