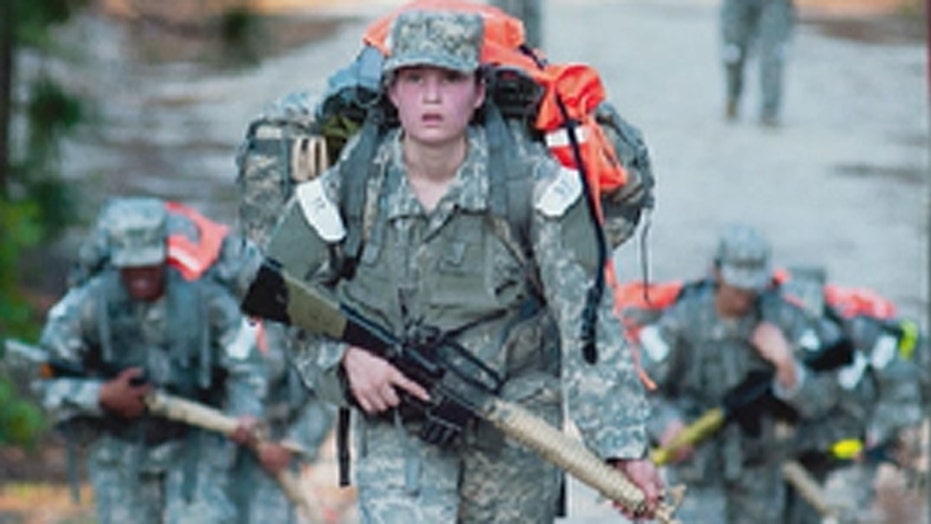 The untold story of a team of female Special Ops soldiers

The U.S. is taking the fight to ISIS from the air and on the ground. The battle has been long and hard and shows no sign of ending, only of shifting shape.

The nature of the wars America is fighting is changing. And so are the people who fight them. And as the U.S. looks for an advantage in the conflict, could it be that women in uniform offer one?

As former Marine and current Ph.D. researcher Kyleanne Hunter writes, “if the purpose of infantries is to ‘locate, close with, and destroy the enemy,’ then women are key to successfully defeating ISIS.”

ISIS is not about to come out onto a battlefield and fight U.S. forces; instead, a hallmark of the fight is their ability to hide in and among civilians.  Syrian women and women in the Kurdish Peshmerga have proven able to locate and offer intelligence on the places where fighters hide, usually nested among civilian populations. And they’re hardly alone.

In 2011 Special Operations Command recruited female American soldiers to “become part of history” and join Army Rangers and Navy SEALs out on combat operations in Afghanistan. The idea was that women could gather information and understanding and knowledge that remained out of reach to male soldiers by speaking and interacting with half the population which they could not reach: women.  They would be part of something called “cultural support teams,” a team of soldiers chosen for their fitness, skill and adaptability to join the kinds of combat operations experienced by less than five percent of the U.S. military – all while women remained officially banned from ground combat. My book, “Ashley’s War: The Untold Story of a Team of Women Soldiers on the Special Ops Battlefield (Harper, April 21, 2015)” tells their story.

Each night these soldiers gathered information that saved the lives and limbs of both Afghan and American forces alike. Like the night that Kimberly, a military police officer, went out on a combat mission alongside a skeptical SEAL team. They didn’t know why she was there or what value she brought to the mission – until she helped them locate the intelligence item they were seeking wrapped up in a baby’s wet diaper. Or the night Isabel, another member of the team, received an award from the Rangers when information an Afghan woman in the compound shared with her helped to confirm that the man whose home they were in was indeed the insurgent they were seeking.

In terms of “closing with” the enemy, a storied retired general told me recently of a member of Al Qaeda who was targeting Americans and Iraqis. The U.S. general sought out a female member of another American special operations team – one that has included women for a number of years – she turned out to be instrumental in locating and getting U.S. forces near the militant leader.

Already women are involved in the special operations fight against ISIS. And they are able to get closer to the enemy precisely because they are unexpected. And effective.

When it comes to “destroying” ISIS, the U.S. needs the best people in the right roles. Recent news stories have focused on the women who are leading and serving on the USS Harry S. Truman aircraft carrier who are part of the fight against the militant group.  And as U.S. military leaders note often and as former Marine Hunter underscores, “destroying" ISIS isn't just about killing fighters. The battle will not be won simply by counting the number of ISIS fighters killed.

Part of the fight against ISIS is defeating the ideas that underpin the terror group and countering the violent extremism that has taken root.  Part of the fight is also learning about what is happening inside homes and communities even in the heat and heart of war.

As American women have shown on the battlefield in Afghanistan, they already have been up close and making a difference in the fight, even if few of us even knew they were there.

Gayle Tzemach Lemmon is a senior fellow at the Council on Foreign Relations and the author of "Ashley’s War: The Untold Story of a Team of Women Soldiers on the Special Ops Battlefield" (Harper, April 2015) and "The Dressmaker of Khair Khana," a New York Times best seller published in March 2011 by HarperCollins, about a young entrepreneur who supported her community under the Taliban. Gayle is a contributor to The Atlantic’s DefenseOne site, writing regularly on national security and foreign policy issues.  Follow her on Twitter @gaylelemmon.
ADVERTISEMENT