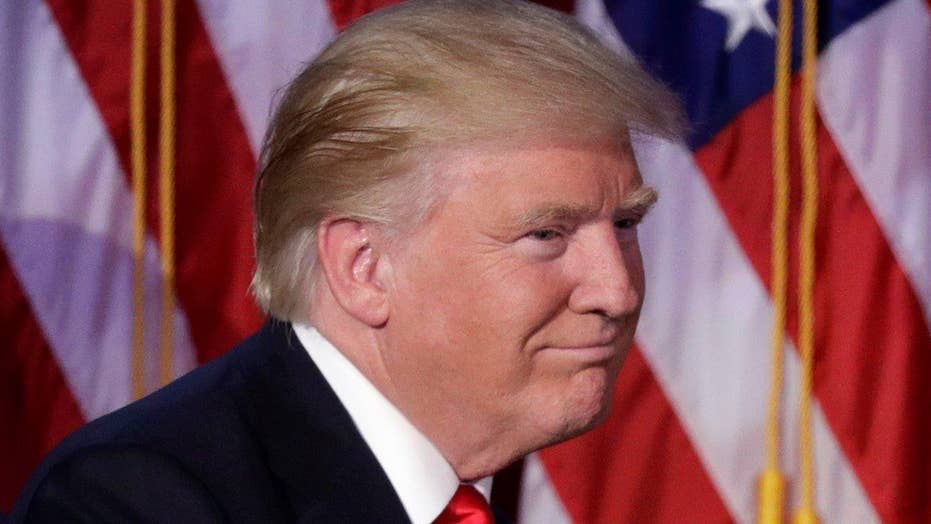 U.K. Independence Party leader Nigel Farage -- one of the masterminds behind the Brexit campaign -- was pictured beaming with President-elect Donald Trump Saturday. He has good reason to be in high spirits as the new occupant of the White House could be the man to save Brexit -- which is already in mortal danger.

It was a great honour to spend time with @realDonaldTrump. He was relaxed and full of good ideas. I'm confident he will be a good President. pic.twitter.com/kx8cGRHYPQ

Just as liberals in the U.S. are already trying to find ways to overturn Trump’s victory by attacking the Electoral College, in the U.K. they have been doing the same ever since the British people comfortably voted to leave the European Union in June.

The soy-sipping Guardianistas who dominate Britain’s chattering class -- after calling relentlessly for either a second vote, or for the referendum to be ignored entirely -- have now picked up a significant victory.

A London investment banker has convinced an activist High Court (you know about those, right America?) to determine that in order to even begin negotiating an exit from the E.U. the issue must be first be voted on by Parliament -- made up of MPs who, for the most part, would never have voted to leave the E.U. in the first place.

This means that from now until the vote in probably early 2017, the mainstream media, left-wing activists and members of the London and European establishment will unload every weapon they have in their arsenal to force MPs to betray the voters. While Prime Minister Theresa May -- herself a Remainer but one who is committed to Brexit -- will try and keep her party united, it is likely many will buckle and join the opposition parties in voting to shut down Brexit.

This is where President-elect Trump could make the difference. Britain is now isolated in Europe, with its European allies on one side treating it like a leper, and a skeptical Obama administration shuffling away on the other. Before the vote, Obama famously said Britain would be “at the back of the queue” if it voted for Brexit, and sure enough the special relationship has apparently stagnated since then.

Britain needs an ally fast, and Trump’s America could come to the rescue. Just as Margaret Thatcher gained the ability to face down Europe knowing she had the support of Ronald Reagan, Theresa May could do the same if Trump stands with her.

So what should Trump do?

First he should embrace the U.K. fully. There are signs he is going to do so already, both by his welcome of Farage and his invite for Theresa May to visit America as soon as possible -- despite some negative statements by May and some of her government in the past. When she visits, a strong expression of solidarity, a renewed commitment to the special relationship, and a promise to stand shoulder-to-shoulder through the Brexit process should all be on Trump’s to-do list.

Second, he should use America’s power as a trading power to insulate Britain from the ravages of the economic traps Europe is laying for the U.K. Britain is one of the strongest economies in the world; if Europe refuses to trade with Britain in a post-Brexit tantrum, America should step up. It is in America’s interests for the Trump administration to offer the best trade deal it can possibly afford to the U.K. and to offer it quickly.

In his excellent piece on the US-UK relationship, strategist and advisor Lee Cohen notes that the US-UK bilateral investment relationship is the largest in the world, with nearly a million American jobs provided by British companies based in the U.S. and investment into the U.K. amounting to just under $600 billion in 2012. Trump should move hard to expand upon this, and couple it by threatening to withdraw favorable trade deals from European countries trying to sabotage Brexit.

Doing so will boost the U.K. economy (nixing the predictions of the naysayers who predicted post-Brexit armageddon), will stifle European opposition and will soothe the nerves of the London financial market. Additionally, it will prove an argument that Brexiteers have been making for a while -- we don’t need to be part of Europe to make good deals with big countries like America, as we can do it by ourselves.

But it would not just be charity by Trump to make Brexit a certainty -- in fact it could be a legacy-defining moment as he pulls America’s closest ally from the fundamentally anti-American E.U., and closer to itself in a way that will benefit Washington.

A Britain free of its European shackles would realign its focus to America, becoming more pro-American and a better ally in military and trade. America saw how valuable a close alliance would be during the Thatcher-Reagan years, where the pair allied up to defeat the Soviet Union, and during the Clinton-Blair and Bush-Blair years where the foreign policies of the respective presidents were bolstered and legitimized on the world stage by unwavering British support.

The same is true of a Trump-May alliance -- a realigned Britain would be more likely to go along with Trump’s proposed NATO reforms, his plan to defeat ISIS, and would be less likely to put pressure on the administration for not going along with the business-sapping deals such as the Paris climate change agreement.

It would be a wise and savvy move for the president-elect to jump to the aid of the politically besieged British center-right. By doing so, he will emerge with Theresa May as a strong prime minister and a grateful ally, heading a government with a pro-American, pro-trade, pro-small government vision, and one more than willing to walk side-by-side with President Trump.

Trump may be the only person who can save Brexit -- he should get to work as soon as possible.