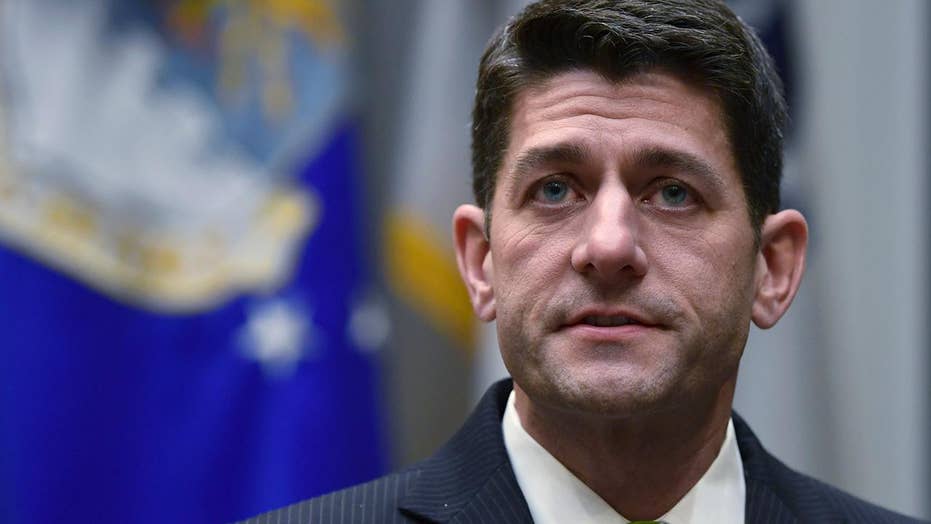 House conservatives are pushing back and fighting for an extension until December 30th to keep the government running; Mike Emanuel explains on 'Special Report.'

House Speaker Paul Ryan, R-Wis., and the Republican Party seem intent on punishing a key part of their base – older Americans.

Ryan announced Wednesday that in 2018 the Republicans will be ready to put Medicare on the chopping block to pay for tax cuts. And those tax cuts are aimed at corporations and the rich – not the middle-class.

“We’re going to have to get back next year at entitlement reform, which is how you tackle the debt and the deficit,” Ryan said. But a good chunk of the future deficit and debt would be fueled by separate tax-cutting bills approved by the House and Senate. The two houses still need to reach agreement on a single piece of legislation for it to go to President Trump for his signature.

As usual, the numbers tell the story. In 2016, older voters who were the most likely to look to Medicare to pay for their health care in retirement put Donald Trump over the top. According to Election Day exit polls, he garnered an almost 20-point margin among white seniors, a 28 percent lead among whites voters ages 45 to 64, and a historic 37-point victory with white working-class voters.

But now the GOP seeks to punish the very folks who brought them to power. Unlike food stamps and welfare, Medicare and Social Security are benefits that working Americans have earned over a lifetime of steady, reliable, and conscientious work. They paid for these benefit with weekly payroll deductions.

In other words, Social Security and Medicare are not welfare. Working Americans shouldn’t be treated as moochers. As Trump declared back in 2013: “It’s not unreasonable for people who paid into a system for decades to expect to get their money’s worth – that’s not an ‘entitlement,’ that’s honoring a deal.”

For Ryan and Senate Majority Leader Mitch McConnell, R-Ky., targeting earned entitlements like Social Security and Medicare is nothing new.

Fresh off his 2012 loss as the Republican vice presidential candidate, Ryan – then chairman of the House Budget Committee – unsuccessfully pressed the idea of restricting Medicare to Americans who were already at least 56, and giving younger workers vouchers when they hit retirement.

In the aftermath of recapturing the Senate in 2014 and on the eve of the 2015 State of the Union address, McConnell beseeched President Obama to “allow us to save and strengthen Medicare” and to “cooperate with both parties to save Social Security.” In other words, make sure both parties have their hands on the dagger and no one will get blamed.

In case Ryan and McConnell forgot, the sole source of income for most Americans now turning 65 is their monthly Social Security check, which averages a little more than $1,200 – before paying $100 a month for Medicare Part B. And the GOP is now a predominately working class party, with voters relying on their earned retirement benefits.

Indeed, among whites without a college degree, the mortality rate is rising. As death from heart disease and cancer have slowed, drug overdoses, suicide and alcoholism have increased.

Moreover, Alzheimer’s disease looms as a disaster for all – a development that stands ready to blow the lid off of any budget. Already, Japan is confronting a “pandemic of dementia” and there is no reason to believe that America won’t be next.

Which leaves us with President Trump. As a candidate, he took a “you paid for it, it’s yours” approach to older Americans. In May 2015, Trump tweeted: “I was the first & only potential GOP candidate to state there will be no cuts to Social Security, Medicare & Medicaid. Huckabee copied me.”

But stating is one thing. Doing something is another.

Now Paul Ryan is sounding like a guy who thinks he’s convinced the president to take a 180- degree turn on Medicare. Ryan has let the world know that he has been speaking privately with  President Trump, and that the president has started to cotton to the idea of cutting entitlements.

As Ryan framed things: “I think the president is understanding choice and competition works everywhere, especially in Medicare.”

Politically, this looks like a play that the Republican cannot afford as they head into the 2018 midterm elections. If the recent Virginia governor’s race and the latest polls tell us anything, it is that younger voters don’t support the GOP, and that the Republicans need older voters if they are retain their grip on Congress.

This past November in Virginia, Ralph Northam – the successful Democratic candidate for governor – outran Hillary Clinton by 15 points among voters under 30, and by 8 percent among the 30-44 set.

Although GOP congressional leaders Ryan and McConnell seem intent on pleasing Republican donors. But they need to remember that politics is about winning – not sticking it to your base.

Creating a Republican version of “death panels” by cutting Medicare and Social Security is a surefire way to hand Democrats control of Congress in the 2018 elections and turn the congressional GOP into the minority party.