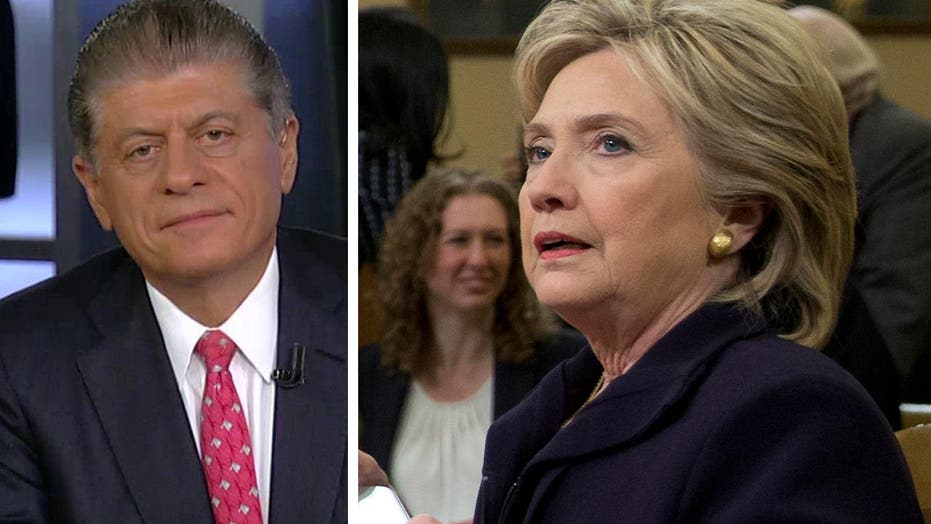 The self-inflicted wounds of Hillary Rodham Clinton just keep manifesting themselves. She has two serious issues that have arisen in the past week; one is political and the other is legal. Both have deception at their root.

Her political problem is one of credibility. We know from her emails that she informed her daughter Chelsea and the then-prime minister of Egypt within 12 hours of the murder of the U.S. ambassador to Libya, J. Christopher Stevens, that he had been killed in Benghazi by Al Qaeda. We know from the public record that the Obama administration’s narrative blamed the killings of the ambassador and his guards on an anonymous crowd’s spontaneous reaction to an anti-Mohammad video.

Over this past weekend we learned that her own embassy staff in Tripoli told her senior staff in Washington the day after the killings that the video was not an issue, and very few Libyans had seen it. We also know from her emails that the CIA informed her within 24 hours of the ambassador’s murder that it had been planned by Al Qaeda 12 days before the actual killings.

Nevertheless, she persisted in blaming the video. When she received the bodies of Ambassador Stevens and his three bodyguards at Andrews Air Force base three days after their murders, she told the media and the families of the deceased assembled there that the four Americans had been killed by a spontaneous mob reacting to a cheap 15-minute anti-Mohammad video.

It is difficult to believe that the federal prosecutors and FBI agents investigating Clinton will not recommend that she be indicted.

Clinton’s sordid behavior throughout this unhappy affair reveals a cavalier attitude about the truth and a ready willingness to deceive the public for short-term political gain. This might not harm her political aspirations with her base in the Democratic Party; but it will be a serious political problem for her with independent voters, without whose support she simply cannot be elected.

That’s because, each time she addresses these issues -- her involvement in Benghazi and her emails -- her legal problems get worse. We already know that the FBI has been investigating her for espionage (the failure to secure state secrets), destruction of government property and obstruction of justice (wiping her computer server clean of governmental emails that were and are the property of the federal government), and perjury (lying to a federal judge about whether she returned all governmental emails to the State Department).

Now, she has added new potential perjury and misleading Congress issues because of her deceptive testimony to the House Benghazi committee. In 2011, when President Obama persuaded NATO to enact and enforce a no-fly zone over Libya, he sent American intelligence agents on the ground. Since they were not military and were not shooting at Libyan government forces, he could plausibly argue that he had not put “boots” on the ground. Clinton, however, decided that she could accelerate the departure of the Libyan strongman, Col. Muammar  Qaddafi, by arming some of the Libyan rebel groups that were attempting to oppose him and thus helping them to shoot at government forces.

So, in violation of federal law and the U.N. arms embargo on Libya she authorized the shipment of American arms to Qatar, knowing they’d be passed off to Libyan rebels, some of whom were Al Qaeda, a few of whom killed Ambassador Stevens using American-made weapons. When asked about this, she said she knew nothing of it. The emails underlying this are in the public domain. Clinton not only knew of the arms-to-Libyan-rebels deal, she authored and authorized it. She lied about this under oath.

After surveying the damage done to his regime and his family by NATO bombings, Col. Qaddafi made known his wish to negotiate a peaceful departure from Libya. When his wish was presented to Clinton, a source in the room with Clinton has revealed that she silently made the “off with his head” hand motion by moving her hand quickly across her neck. She could do that because she knew the rebels were well equipped with American arms with which to kill him. She didn’t care that many of the rebels were Al Qaeda or that arming them was a felony. She lied about this under oath.

My Fox News colleagues Catherine Herridge and Pamela Browne have scrutinized Clinton’s testimony with respect to her friend and adviser Sidney Blumenthal. Recall that President Obama vetoed Clinton’s wish to hire him as her State Department senior adviser. So she had the Clinton Foundation pay him a greater salary than the State Department would have, and he became her silent de facto advisor.

They emailed each other hundreds of times during her tenure. He provided intelligence to her, which he obtained from a security company on the ground in Libya in which he had a financial interest. He advised her on how to present herself to the media. He even advocated the parameters of the Libyan no-fly zone and she acted upon his recommendations. Yet she told the committee he was “just a friend.” She was highly deceptive and criminally misleading about this under oath.

It is difficult to believe that the federal prosecutors and FBI agents investigating Clinton will not recommend that she be indicted. Inexplicably, she seems to have forgotten that they were monitoring what she said under oath to the Benghazi committee. By lying under oath, and by misleading Congress, she gave that team additional areas to investigate and on which to recommend indictments.

When those recommendations are made known, no ballot will bear her name.