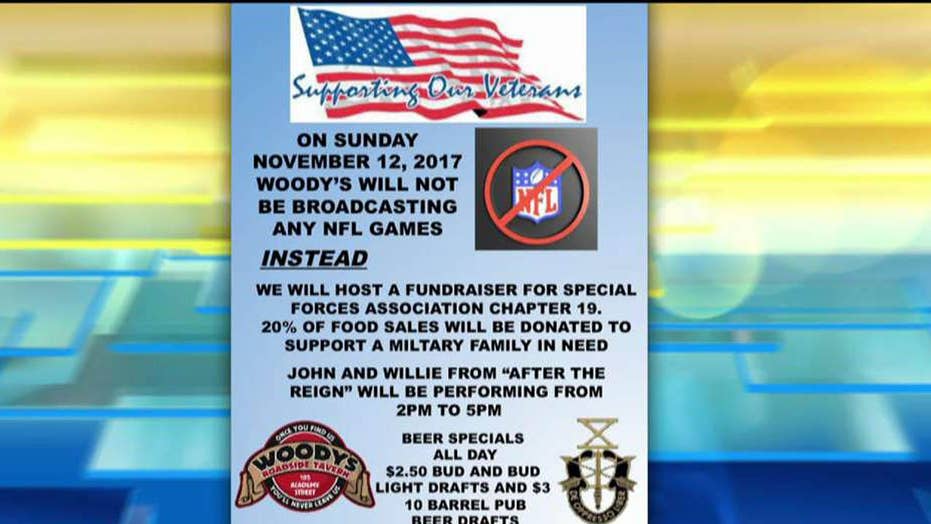 Co-owners of Woody's Roadside Tavern speak out on the success of their Sunday event on 'Fox & Friends.'

I’m from Green Bay; my high school colors were green & gold and I am part owner of the Green Bay Packers from when they sold stock after the 1997 Super Bowl victory. So, it took quite a bit to get me to boycott the NFL, but they managed it. Until the owners require their players to stand for the national anthem, or sit for the game, I won’t watch a minute, and I’m not alone.

Since Colin Kaepernick began kneeling during the anthem in a misguided protest against police violence, the NFL has been hemorrhaging fans. Both TV viewership and attendance at stadiums are well down and once people find other ways to spend their Sundays, they may not come back.

Let there be no doubt, the NFL is a business and the owners of those billion dollar plus franchises have a problem. A bunch of their players want to play social justice games, but their core audience, the folks who pay the bills, just want them to play football. And we really don’t like the disrespect shown to the anthem, the flag and those who fought for our country including those who came home in coffins with that flag draped over them.

This Veterans Day weekend there was quite a duality. The NFL went whole hog saluting the military and trying to mend fences. Historically the league, and most of the players, have been very supportive of the military. Part of that was the tens of millions of tax dollars the military paid them to put on displays with the flag and flyovers for the recruiting value, but there was also a genuine bond for the most part.

But at the same time there was a push to boycott the NFL. I did my part on social media:

Like many others, seeing a bunch of pampered millionaires stealing the moment when we should all come together in thanks for the freedoms we enjoy, and yes for those who safeguard them, well that just flat pisses me off.

They say the protests are not against the anthem or the flag or the military for that matter. But that is garbage because the effect is to disrespect all of those things so they can virtue signal their solidarity with the radical left. They could do their social justice pandering whenever they want, and they made a conscious choice.  By choosing to put the spotlight on themselves instead of the symbols of what makes this country great.

That just doesn’t sit well with those of us who served, or have family who did or who just want to enjoy a football game without politics. We get plenty of bitter arguments and displays of partisanship all day every day. Football was a time to forget all that and just remember how much the Bears still suck. They took that and even worse did so with divisive anti-police grievance mongering to a crowd with a heavy component of Blue Lives Matters sentiment.

We will see if the NFL charm offensive worked, although the pictures of half empty stadiums should sure give the owners cause to worry. It’s pretty simple to fix, tell the players to stand up for America or the rest of us may sit out…permanently.