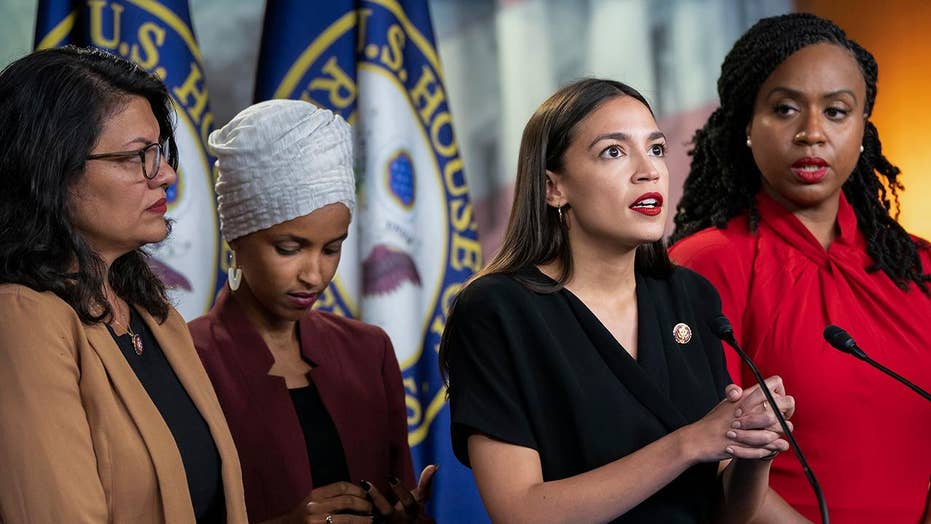 What does Alexandria Ocasio-Cortez and the 'Squad's' prominence mean for the Democrats?

Fox News contributors Karl Rove and Mike Huckabee react to the increasing rift within the Democratic Party on 'Hannity.'

Washington has been caught in a dumpster fire. It started with President Trump's tweets telling four Democratic congresswomen, who are also known as "the squad," to "go back" to the countries they came from. The Democratic-led House swiftly passed a resolution condemning President Trump as a racist.

Trump hasn't backed down, and he continues to lash out on Twitter. In a campaign rally, his supporters chanted "send her back" in reference to one member of the squad, Rep. Ilhan Omar, D-Minn. Of course, the squad fired right back. Both #Sendherback and #IstandwithIlhan trended on Twitter, so it doesn't seem the dumpster fire will go out anytime soon.

Many on the right called the president's tweets not only wrong, but politically stupid.

LAURA INGRAHAM: 'THE SQUAD' IS ROOTED IN RADICALISM — AND RATTLED BY TRUMP'S SUCCESS

As an immigrant and as a writer, people who don't like what I have to say often tell me to "go back" to where ever they believe I came from. Such a phrase is derogatory, and I wish the person holding the presidency wouldn't say it. The tweets and chants of "send her back" are wrong, but I don't think Trump is being politically stupid.

It's true his tweets briefly united the squad with House Speaker Nancy Pelosi and the rest of the Democratic Party. But the timing seems like a deliberate strategy. Trump managed to tie the entire Democratic Party to radical Reps. Alexandria Ocasio-Cortez, D-N.Y., Ayanna Pressley, D-Mass., Rashida Tlaib, D-Mich., and Omar. That strategy became clearer when he tweeted, "The 'squad' has moved the Democrat Party substantially LEFT, and they are destroying the Democrat Party."

By designating "the squad" as the face of the Democratic Party, Trump forced Democrats and his future 2020 challenger to own "the squad's" problems.

Trump won the 2016 election not primarily because he was liked, but because many voters disliked his Democratic opponent, Hillary Clinton, even more. Today, Trump is wildly popular with his base, but he still has high unfavorable ratings with the general public. If he can show the American people that his Democratic challenger is even worse, he will win again.

"The squad" does have many problems. Its members are inexperienced. They are stars on social media more than they are serious legislators. They are not willing to listen and learn. They want to reshape America in the most radical way, from abolishing the Department of Homeland Security to eliminating farting cows. Outside of their far-left base, what they stand for is deeply unpopular with mainstream Americans.

Trump won the 2016 election not primarily because he was liked, but because many voters disliked his Democratic opponent, Hillary Clinton, even more. Today, Trump is wildly popular with his base, but he still has high unfavorable ratings with the general public. If he can show the American people that his Democratic challenger is even worse, he will win again.

Pelosi, recognizing what Trump is doing and the danger if he succeeds, has tried hard not to let "the squad" become the face of the Democratic Party. But she has no support from either "the squad" or the left-leaning media.

Additionally, "the squad" has doubled down on radical rhetoric and unpopular policies. While the spotlight was on them, Omar and Tlaib, both of whom have made plenty of anti-Semitic comments in the past, were among House members who introduced a new "pro-boycott" resolution, which offers support to the anti-Semitic Boycott, Divestment and Sanctions (BDS) movement. Both Omar and Tlaib insist they support democracy, but they want to boycott Israel, the only democracy in the Middle East.

True to its nickname, "the squad" has been shooting at everyone, including fellow Democrats, and especially Pelosi. Ocasio-Cortez accused Pelosi of "singling out newly elected women of color" prior to Trump's tweet.

Right after Pelosi led the House in passing a resolution condemning Trump's tweets, Tlaib turned her fire on Pelosi, blaming the speaker for death threats the squad allegedly received. Ocasio-Cortez has also given her chief of staff free rein to take down centrist Democratic legislators.

The clueless left-leaning media has played along by giving "the squad" front-page coverage almost daily. The only two people who receive similar attention from the media are Trump and Pelosi. That limited range of coverage means Democratic presidential candidates receive very little attention at all. They must be pretty frustrated.

"The squad" is destroying the Democratic Party as we have known it. Should their ideas become policies, they will destroy America. Each day, the squad dominates the media with outlandish accusations and radical ideas. And each day, that's good for Trump. If Trump wins in 2020, he will have "the squad" to thank, and any centrist Democrats will know who they should blame.