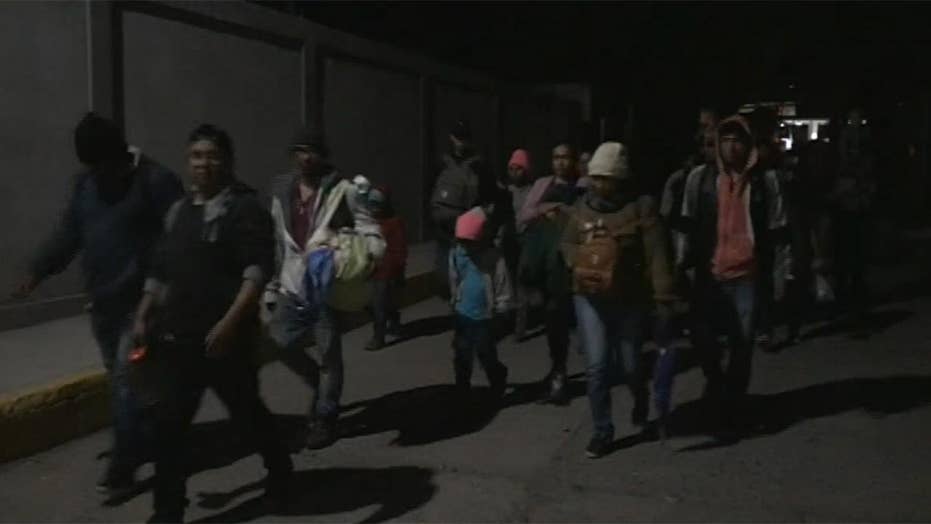 Raw video: Fox News' Griff Jenkins encounters group of migrants crossing into Mexico and meeting no resistance at the border.

Castro and Gillibrand believe ICE, which combats terrorism and transnational crime, should be abolished. This is no longer a fringe position in the Democratic Party, backed by candidates including Sen. Kamala Harris, D-Calif., front-runner and socialist Bernie Sanders, I-Vt., and the struggling Sen. Elizabeth Warren, D-Mass.

Nearly all the illegal immigrants from south of Mexico cross into Mexico via the land border with Guatemala. This is an unlocked backdoor into the United States kept open by Democrats and their State Department allies.

Rep. Norma Torres, D-Calif., who was born in Guatemala, has introduced the Guatemala Rule of Law Accountability Act. She wants travel and financial sanctions on those who have allegedly "undermined Guatemala’s justice system.” In reality, that should apply to Joe Biden, Barack Obama, and their former ambassadors. But for ideologically driven

Torres, it applies to Morales and his interior and foreign ministers.

To undermine Trump and keep illegal migration flowing, Democrats and State Department bureaucrats are supporting the theft of this year’s presidential election for the socialist candidate. It's hard to keep up with all the Democrats who have visited the region. One recent visit to the region was led by Jerry Nadler, the New York Democrat who chairs the House Judiciary Committee.

Nadler accompanied Reps. Eliot Engel, D-N.Y., Zoe Lofgren D-Calif., Pramila Jayapal, D-Wash., and Adriano Espaillat, D-N.Y. From El Salvador, they released a joint statement: "We will work with our colleagues in Congress to do everything in our power to push back on the president’s misguided approach to Central America.”

Trump is fighting the very socialism in the region that today's Democratic Party openly embraces.

Socialists believe government money can fix any problem. The Obama administration poured money into the region, which led to more instability. Judicial Watch has identified more than 12 entities that receive aid from the U.S. government and George Soros. Judicial Watch identifies Soros’ agenda as “open borders.”

In February, Democrats did acknowledge funding "efforts alone are not sufficient." After a trip to Guatemala, a delegation led by Sens. Tom Carper, D-Del., and Jeff Merkley, D-Ore., wrote that "only the institutions in the Northern Triangle countries can fully restore the rule of law.”

There is just one problem: they want to control these institutions rather than allow them to be independent. Democrats have been openly meddling in Guatemala to help socialists for years. They support a criminal justice system that promotes the very illegal immigration they claim to want to fix.

Democrats are refusing to cooperate in changing immigration and asylum laws, assuming the issue will favor them in 2020.

Socialists are well organized in Guatemala, as they are in much of Latin America — a result of Fidel Castro spreading Marxism across the region for decades. Castro's involvement is also the reason we see Venezuela in such turmoil today.

Trump is continuing to reverse Cuba policies changed by Obama, including Monday’s action that stopped U.S. money going to Cuba’s state-run baseball program. Obama’s embrace of the Castro regime departed from the policy of his 10 immediate predecessors.

Democrats should work with Trump to mitigate the immigration crisis. They should change the laws that release immigrants into the United States pending hearings. This is an open invitation for migrants to make the perilous journey. Yet Democrats are refusing to cooperate in changing immigration and asylum laws, assuming the issue will favor them in 2020.

Instead, Democrats attack Trump and work with leftist allies in Guatemala to smear Morales, a law-and-order president. They are supporting socialist candidates both at home and abroad, with the goal of worsening the crisis on the border.

The only prominent voice opposing Democrats and State Department employees is Sen. Mike Lee, R-Utah. In March, he tweeted: “Free and fair elections of a nation’s representatives, chosen by and for the people, is the foundation of republican government. Our friends in Guatemala should be able to exercise this right, free from foreign influence by the U.S. State Department.”

Democrats are determined that will not be the case.