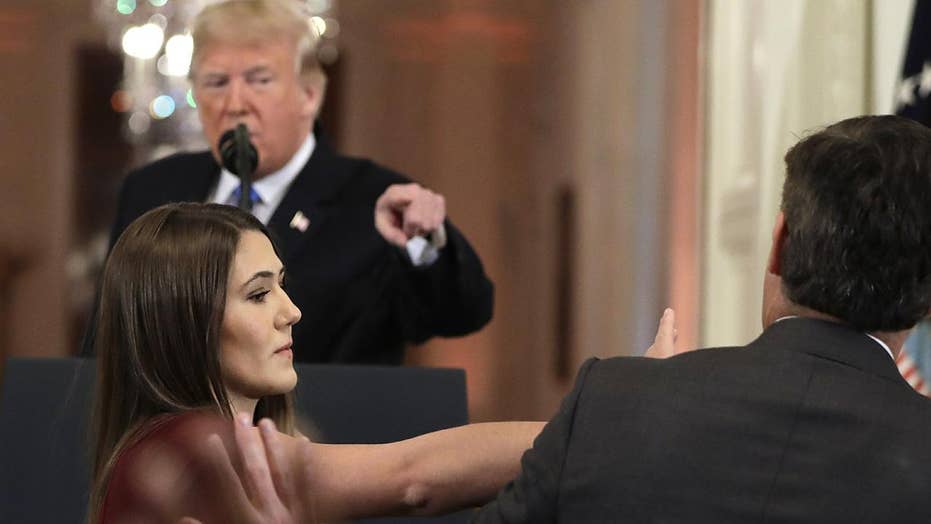 From fawning over Beto O'Rourke to Jim Acosta's battle with the White House, the Media Research Center's Dan Gainor reveals the 5 worst moments of the year.

It’s the end of a year when anti-Trump media bias hit new heights, but hold your applause. Expect the media to be far worse in 2019.

Why? Because the first stage of the 2020 presidential election campaign has already begun. Heck, Democrats have promised at least 12 separate primary debates – six in 2019. That seems more of a threat than a promise. But it will be an opportunity for the left-loving media to be even worse in 2019 than they were this year.

The last week of the year is supposed to be easy and low-key – a slow news week smack dab between two major holidays.

Instead, 2018 ended with the media blaming President Trump for not going to Iraq, as he was on his way to Iraq; blasting the president for talking to a kid about Santa; and quoting the children of a doctor who died more than 10 years ago to comment on the president’s bone spurs.

It was a fiasco. But with Father Time ready to hit the annual reset button, those weren’t the things you should remember most from this horrible media year.

Here are five quotes that should bring back memories – bad ones. These aren’t necessarily the worst. That’s hard to quantify.

How many times can journalists say Trump is crazy, should be impeached, or is like Hitler before the magic wears off?

The following five quotes point to some great structural problems with the media. Both news and entertainment media are so tragically dysfunctional that it’s unsurprising that even some liberals are calling for new regulations dealing with the media.

Maybe, that’s what happens when you watch too much CNN and MSNBC.

Here are the five quotes, counting down to No. 1:

5. Spinning on His Axis: The Trump presidency has been hard on New York Times economics columnist Paul Krugman. On election night, he made a ridiculous prediction about global recession. And he’s been saying loony stuff ever since. But there’s a difference between a goofy opinion and one that paints America as evil.

Krugman has gone so far as to condemn America as evil. “There's a new axis of evil: Russia, Saudi Arabia -- and the United States,” Krugman tweeted earlier this month.

Let’s examine that. Russia is awful, but so is China, for example.

Krugman’s own newspaper reported in August: “United Nations human rights experts expressed alarm on Friday over what they said were many credible reports that China had detained a million or more ethnic Uighurs” because the Uighurs are Muslims and from a minority ethnic groups.

And the Saudi killing of Washington Post contributing columnist Jamal Khashoggi was horrible. But it’s horrible as well that Iran exports terror around the world. Iran supports the Hezbollah terrorist group that killed 241 members of the U.S. military in the bombing of a Marine compound in Lebanon in 1983, and has gone to war against Israel.

Then there’s the U.S.A. Krugman was upset simply because the U.S. didn’t endorse a climate report. Liberals seem frustrated that most Americans don’t consider climate change a top priority.

An NPR/PBS NewsHour/Marist poll from October had only 7 percent of those polled listing “climate change” as the top priority for their vote.

4. You Beto, You Bet: Journalists used to avoid becoming part of the story. At the very least, they tried to avoid showing how much they adored the liberals they were interviewing. That all went out the window with Barack Obama’s second coming of Camelot.

Now the new liberal love affair is with U.S. Rep. Robert Francis "Beto" O'Rourke, D-Texas, who is in his final days as a member of Congress.

O’Rourke was the darling of the media all year, even though he ended up losing narrowly to Republican Sen. Ted Cruz when he tried to win Cruz’s Senate seat in November.

Some on the left and in the media are already talking about the losing Senate candidate as presidential timber. And one of the best examples of journalists humiliating themselves in 2018 came when ABC News reporter Paula Faris pretended to do an O’Rourke news story.

The result was more like a celebrity interview with Bruce Springsteen, or perhaps Dwayne “The Rock” Johnson. The only real news to come out of it was when Faris couldn’t contain herself, calling O’Rourke a “rock star” and when he denied it she added, “No, you really are!”

3. Let’s Demonize Republicans: The left opposed the nomination of Supreme Court Justice Brett Kavanaugh with such venom that it brought out a lot of feminist rage in 2018. One of the most demented examples came from liberal author Jill Filipovic’s unhinged Twitter rant.

Filipovic started with just four words: “Divorce your Republican husbands.” The reaction on Twitter was immediate and very critical. Rather than delete, she kept at the point.

Filipovic then gave this more rationally stated defense: “You don’t deserve a female partner if you support men who mistreat women - personally or politically.” And this response: “It’s kind of amazing how sensitive and thin-skinned you all are.”

The best thing about Filipovic’s tweet is that it showed how the left now wants to make every aspect of life – even marriage – a political battleground.

2. It’s Not America If CNN Doesn’t Like It: No list of embarrassing media quotes would be complete without CNN's Chief White House Correspondent Jim Acosta. He spent all year crossing swords with Trump and his supporters. But his Aug. 1, appearance on HLN’s “S.E. Cupp Unfiltered” stood out as being especially odious.

Acosta reported from a Tampa, Florida, at a Trump rally. He complained that the president was “whipping these crowds up into a frenzy to the point where they really want to come after us.” His assessment of the event was even worse.

“Honestly, it felt like we weren't in America anymore,” he explained. “I don't know how to put it any more plainly than that. Americans should not be treating their fellow Americans in this way.”

So, a place where people disagree with CNN reporters isn’t “America anymore.” Hubris, anyone?

Anchor Don Lemon, famous for appearing tipsy and getting pierced live during New Year’s Eve, gave one of two spirited CNN defenses of thugs. But Lemon’s was worse because he took a more obvious swing at rationalizing violence.

First, Lemon talked about how Trump was racist for criticizing Antifa, even though it is filled with white liberals. Then came the defense of Antifa rant:

“It says it right in the name, Antifa, Anti-Fascism, which is what they're fighting,” he explained. “Listen. There is, you know, no organization is perfect. There is some violence. No one condones the violence. But there are different reasons for Antifa and for these neo-Nazis to be there. One, racists, fascists, the other group fighting racists, fascists, there is fascists. There is a distinction there.”