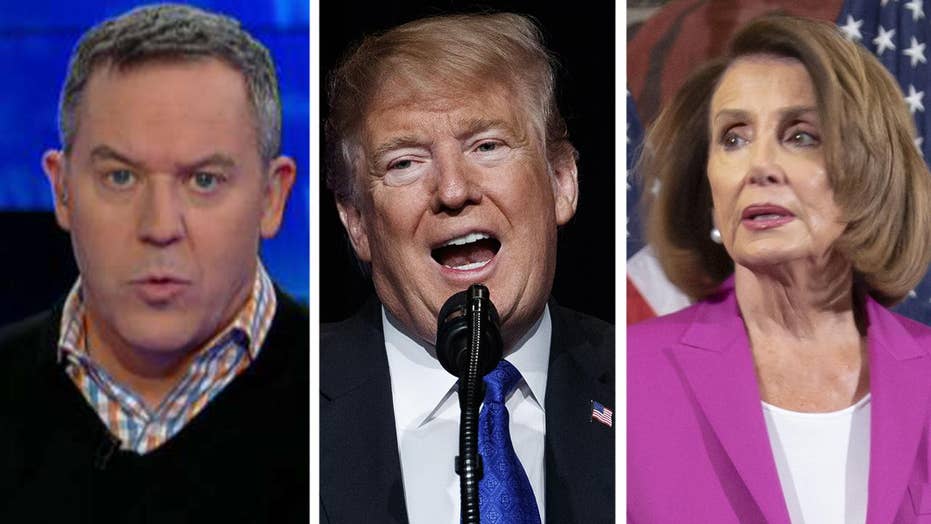 Gutfeld on Trump's letter to Pelosi

President Trump should accept Nancy Pelosi's State of the Union offer, skip town and hold a giant event in the middle of America.

Citing security concerns during the shutdown, Nancy Pelosi has asked Donald Trump to give his State of the Union address in writing.

Canceling her trip to Brussels Thursday night right before takeoff.

In the letter he said, he was "sorry to inform her," that he's canceling the trip.

He basically stole her lunch money.  And then he ate her lunch.

Still, Trump should accept her offer. And send the State of the Union address in writing: a sheet with just two words:

Then he should hold a giant event in the middle of America.

After all, the people elected Trump, not Washington, D.C.  Nancy and the Dems can take shelter under their desks and watch it all on iPads.

And Trump can cite his accomplishments, tell some jokes -- just so the press has a reason to burn their hair.  He can broadcast it on YouTube. The media will cover it in highly flammable fact-checks.

It'll be the first People's State of the Union!

If the media doesn't show it -- then we know it's personal and political -- for this is historical. And hysterical!

Cuz what do the Dems do then?

Do they not respond when he does it anyway -- at a better place, with better-looking people? With music, prizes, farm animals and face painting? And almost no carbon footprint! Think about that!

Do they hold a response? With the same cardboard cutouts from before?

It gets him out of a dull speech -- and it gets “The Five” out of going to D.C.  – a place with overpriced booze, incompetent politicians and substandard food.

Which really, is the whole point of this monologue.