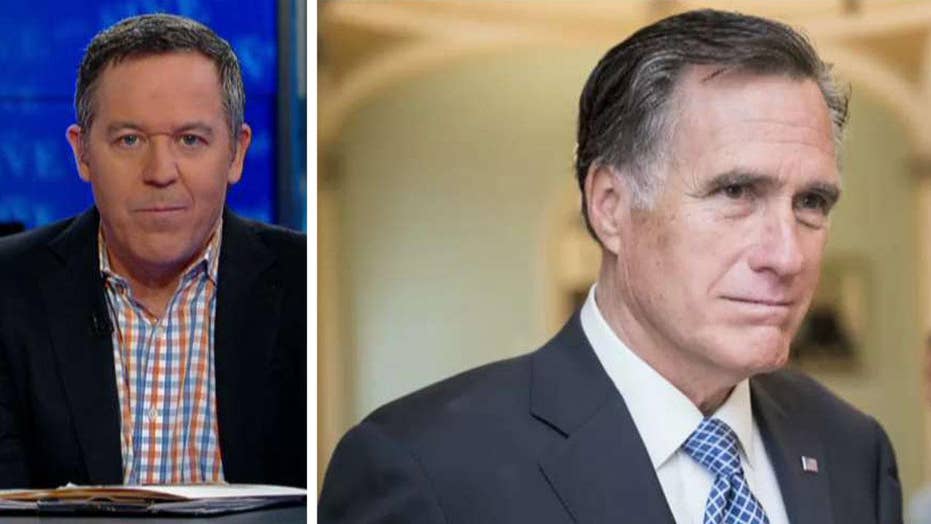 Gutfeld on Mitt's attack on Trump

Mitt Romney and President Trump engage in a war of words.

On January 1, Mitt Romney, a man so stiff you could iron a shirt on him, bashed the prez in the Washington Post.

You know the drill: Trump’s rude, lacks character and so on.

If the definition of insanity is complaining about something that never changes, Mitt's finally made it to the loony bin.

And he was helped by a media acting like that blast from the past who indulges unhappy exes.

Mitt's still mad about Trump – and the Washington Post and CNN will let you cry on their shoulder, as long as it’s in public. And you pay for the dry cleaning.

It's tempting for Mitt: it feels good to get hugs from a media that once branded you a sexist bully who hurt dogs and kept women in binders.

A press that joined Obama's dry laugh when Mitt said just maybe Russia is a problem.

But this attention is just strange new respect that’s gone by tomorrow.

The media may pretend to like you cuz you hate Trump, but they’re just using you.

Don't forget. The media was brutal to Mitt, as they are to anyone right of Castro.

And if Trump hadn't won, had it been Rubio, or Bush - you think they'd be spared? Jeb would be a warmonger and Rubio a misogynist.

To the press the only acceptable Republican is an ex-Republican.

His name is Joe Scarborough, and nobody cares.

So Mitt, that warm glow you feel from the left isn’t true love. It's a bug-zapper. They'll pull you in, as long as you diss Trump - but only until it's time for them to fry your butt.