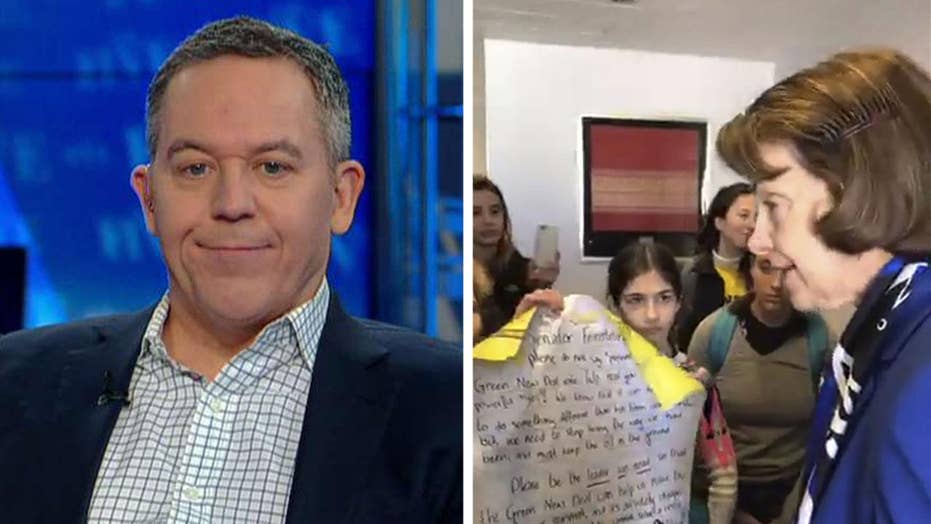 Gutfeld on Feinstein's confrontation with kids

If you are going to use kids as political shields, you put them in the way of the truth.

On Friday, a bunch of middle school and high school students confronted Dianne Feinstein at her office to demand she back the Green New Deal.

But for once, an adult wasn't having it.

DIANNE FEINSTEIN SCOLDS KIDS WHO PUSHED HER TO BACK GREEN NEW DEAL: 'I KNOW WHAT I'M DOING'

In fact, she sounded about five minutes away from telling them to get out of her yard.

But when Feinstein says to the kids, “There’s no way to pay for it” – what does that remind you of?

She sounds exactly like a Republican talking to a Democrat!

Finally, the Sketcher is on the other foot.

Now, I'm sure some people thought Feinstein was too mean to the kids, who were no doubt parroting slogans programmed by adults who see the kids as conduits for the latest leftwing software.

But the truth hurts, and if you're gonna use a kid as a political shield - you put them in the way of the truth.

More important: if you don't feel a little gross when you see kids used as props, there’s something wrong with you.

Mind you: these kids are pushing a plan that bans fossil fuels in 10 years.

Do you think in a few years, they'll feel the same way when they get their learner's permit?

But don’t blame them. It’s the parents, the teachers, the activists.

They know that their untenable political positions require propagandized pawns to survive, and you gotta get the pawns when they're young.

And then hope and pray they don't grow out of your stupid ideas.