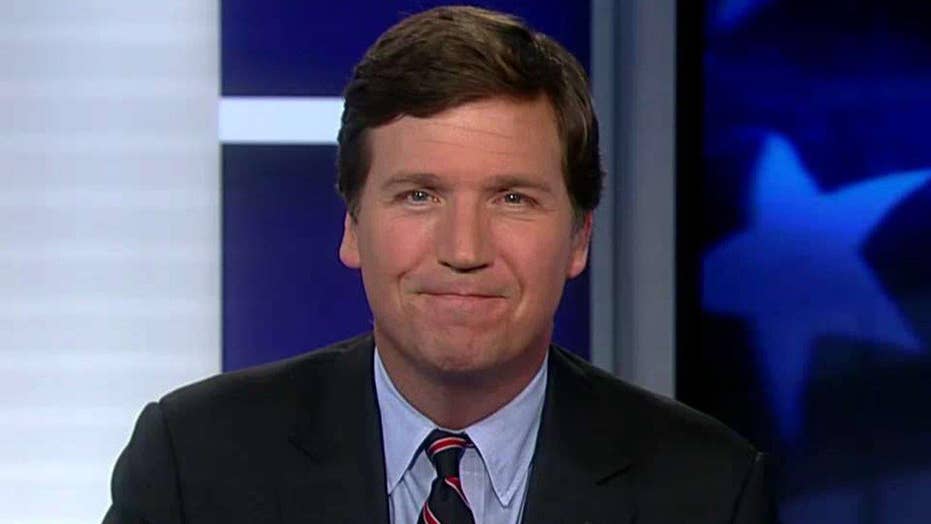 [Disclaimer: Not only do I work with Tucker Carlson, but I've known him for a number of years. I find him to be a jovial, neurosis-free rapscallion who could use a decent dry cleaner, but that's on him. Having said that, someone like me needs to give an early assessment of this monstrous thing he calls a program. if TV news were oatmeal, Tucker's is  bacon-wrapped pork belly deep fried in a bag of prison Cheetos. Stepped on by a Bolivian businessman.]

Here's my analysis after a month of watching Tucker's stoic pucker (when Tucker listens, his face resembles a curious dog glued to a TV, watching antelopes mating in a "Wild Kingdom" rerun).

Imagine that a host of a daily show is a surfer. The surf board is the show, and each morning the host wades into the water to catch a wave that one might call "the news." Every day, that host tries to catch a wave -- not just any wave, but one that catapults him above the other surfers. Now, the interesting thing here, for most of us -- is that you don't necessarily have to catch a decent wave at all. Just go out there on your board, and you ride the news -- 99 percent of the job really is showing up.

So, why is Tucker's show different?

For some reason, at least once or twice a week, Tucker lumbers into the ocean, plops onto his surf board, and with expert timing and an innate sense for "what's big," he finds the biggest, most outsized wave, and rides it. When he lands an interview, it's always the weirdest and most contentious one -- and all he does is ride it to shore. It's a rare, athletic art -- and I marvel at his ability to repeat a simple question without breaking a sweat. Where one's voice might be raised, or an instinct to insult might arise -- Tucker merely laughs like a viewer, as the panicked guest implodes before his mild repetition. Any guest's evasive maneuvering Tucker finds politely annoying, as he gently tries to tug the guest back to his question, as though he's reigning in a distracted pug. You can't call him mean, or angry, or remotely ideological or sensational. He's a gentleman, which throws so many people off.

Back to the surf analogy: If you've been watching his show lately -- there are at least 5 interviews by Tucker where he simply rides an absurd guest to the shore. As the guest flounders in the sand -- Tucker just steps off the board, and says, "we'll be right back." It's both amusing, impressive, and entirely ego-free. Tucker's interviews work, because he's not interested in humiliating anyone. He lets them handle that job.

I predict big things for this guy. Though he might want to experiment with a bow tie.