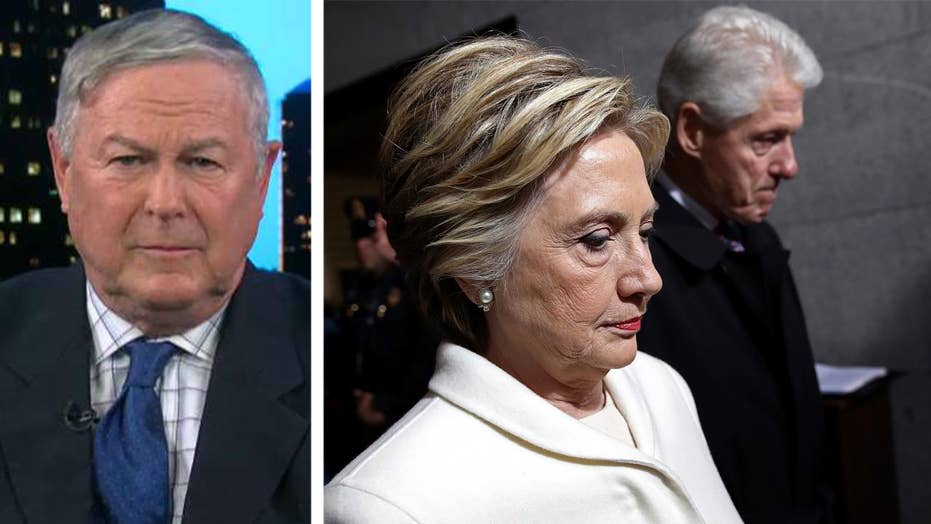 Rep. Dana Rohrabacher tells Tucker he has been trying to get a hearing on the Clintons-Russia connection for months. #Tucker

Over the weekend, the mainstream media was absolutely giddy with delight upon learning there would be an indictment by special counsel, Robert Mueller.

This was proof positive, they insisted, that Trump “colluded” with Russia to influence the 2016 presidential election.  Their exuberance was the equivalent of a two day-long tailgate party. Too bad it was premature.

The celebration came to a crashing end when the indictments of Paul Manafort and his business associate, Rick Gates, were unsealed Monday morning.  It turns out the charges are, basically, a tax fraud case.  The two men stand accused of hiding their income from their lobbying work for Ukraine in order to avoid paying taxes, then lying about it.  That’s it.

The 31-page indictment makes no mention of Trump or Russia or “collusion.”  The media seemed as dejected as a kid who wakes up on Christmas morning, only to find there are no presents under the tree.  Gee whiz.

The truth is, it should have come as no surprise to anyone, much less the media, that Manafort was in legal jeopardy for his business dealings.  The FBI raided his home over the summer.  It was later learned that the FBI wiretapped his conversations as far back as 2014.  And it was widely reported that Manafort had been told by Mueller’s team that he would be criminally charged.

It could be said that Hillary Clinton is the one who was conspiring with the Russians by breaking campaign finance laws with impunity.

The media became even more dispirited when they read through the indictment, discovering that nearly all of Manafort’s alleged wrongdoing substantially pre-dates his brief stint as chairman of the Trump campaign.  In other words, there is no connection to either Trump or his campaign.

Somewhere, I’m sure, ABC’s Martha Raddatz and CNN’s Van Jones were crying.  Again.  Just like the tears they shed on camera election night when Hillary lost.

But wait.  Shortly after the indictments were unsealed, the media’s spirits were suddenly boosted when the special counsel revealed that a former adviser to Trump pleaded guilty to lying to the FBI about his contacts with a Russian national during his time on the Trump campaign.  Surely this was evidence of illegal “collusion,” right?

Wrong.  George Papadopoulos pled guilty to a single charge of making a false statement to the FBI.  He was not charged with so-called “collusion” because no such crime exists in American statutory law, except in anti-trust matters.  It has no application to elections and political campaigns.

It is not a crime to talk to a Russian. Not that the media would ever understand that.  They have never managed to point to a single statute that makes “colluding” with a foreign government in a political campaign a crime, likely because it does not exist in the criminal codes.

To put it plainly, Mueller is tasked with finding a crime that does not exist in the law. It is a legal impossibility. He is being asked to do something that is manifestly unattainable.

But that did not stop them from accusing Donald Trump, Jr., of illegally conspiring with the Russians when he met with a Russian lawyer to obtain information on Hillary Clinton.  What law did he break?  None.  The Federal Election Commission has made it clear that it is perfectly lawful for foreign nationals to be involved in campaigns, as long as they are not paid and do not donate money.  Which brings us to Hillary Clinton.

It is against the law for the Clinton campaign and the Democratic National Committee to funnel millions of dollars to a British spy and to Russian sources in order to obtain the infamous and discredited Trump “dossier.”  The Federal Election Campaign Act (52 USC 30101) prohibits foreign nationals and governments from giving or receiving money in U.S. campaigns.  It also prohibits the filing of false or misleading campaign reports to hide the true purpose of the money (52 USC 30121).  This is what Clinton and the DNC appear to have done.

Most often the penalty for violating this law is a fine, but in egregious cases, like this one, criminal prosecutions have been sought and convictions obtained.  In this sense, it could be said that Hillary Clinton is the one who was conspiring with the Russians by breaking campaign finance laws with impunity.

But that’s not all.  Damning new evidence appears to show that Clinton used her office as Secretary of State to confer benefits to Russia in exchange for millions of dollars in donations to her foundation and cash to her husband.  Secret recordings, intercepted emails, financial records, and eyewitness accounts allegedly show that Russian nuclear officials enriched the Clintons at the very time Hillary presided over a governing body which unanimously approved the sale of one-fifth of America’s uranium supply to Russia.

Despite all the incriminating evidence, Clinton has managed to avoid being pursued by a special counsel.  Trump, on the other hand, is being chased by Robert Mueller and his team, notwithstanding a dearth of evidence.

The indictments of Manafort and Gates now present a unique opportunity to challenge the authority of the special counsel.

Until now, no one had legal “standing” to argue in court that the appointment of Mueller was illegal.  The criminal charges change all that.  The two defendants will be able to argue before a judge that Mueller’s appointment by Acting Attorney General Rod Rosenstein violated the special counsel law.

As I pointed out in a column last May, the law (28 CFR 600) grants legal authority to appoint a special counsel to investigate crimes.  Only crimes.  He has limited jurisdiction.  Yet, in his order appointing Mueller as special counsel (Order No. 3915-2017), Rosenstein directed him to investigate “any links and/or coordination between the Russian government and individuals associated with the campaign of President Donald Trump.”   It fails to identify any specific crimes, likely because none are applicable.

To put it plainly, Mueller is tasked with finding a crime that does not exist in the law.  It is a legal impossibility.  He is being asked to do something that is manifestly unattainable.

If the federal judge agrees, Mueller and his team would be disbanded by judicial order.  The Department of Justice would have to seek a new indictment of Manafort and Gates without the special counsel or drop the case entirely.

The naming of Robert Mueller was tainted with disqualifying conflicts of interest from the beginning.  Fired FBI Director James Comey admitted he leaked presidential memos to the media for the sole purpose of triggering the appointment of a special counsel who just happens to be Comey’s longtime friend, ally and partner.

It is no coincidence that Rosenstein appointed Mueller.  We now know both men were overseeing the corrupt Uranium One sale which involved Russian bribes, kickbacks, extortion and money laundering.  They appear to have kept it secret, even hiding it from Congress which would surely have cancelled the transaction involving a vital national security asset.  A cover-up?  It has the stench of one.

How can Americans have confidence in the outcome of the Trump-Russia matter if the integrity and impartiality of Mueller and Rosenstein has been compromised by their suspected cover-up of the Clinton-Russia case?   Both men should resign.

And a new special counsel should be appointed – this time to investigate Hillary Clinton, not Donald Trump.