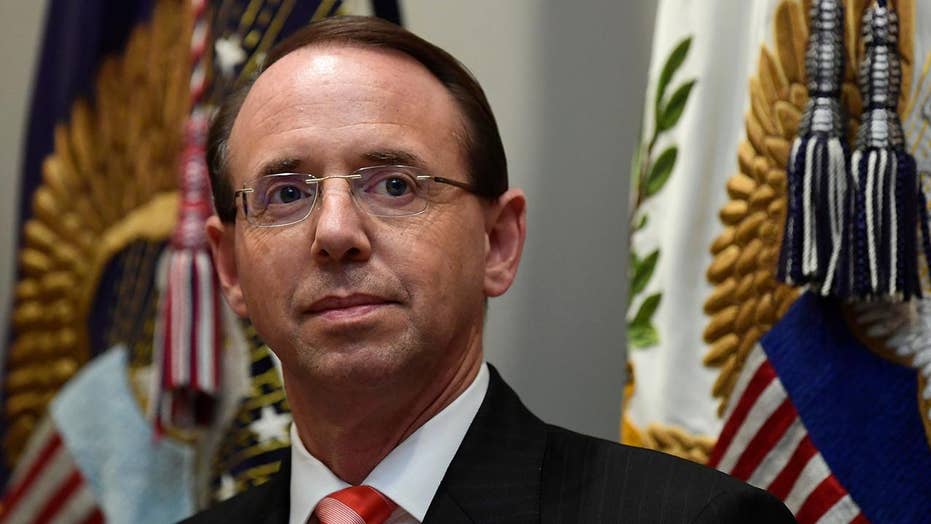 Jarrett on why Rosenstein won't talk under oath on Hill

Editor’s note: This op-ed is based in part on the author’s New York Times best-selling book “The Russia Hoax: The Illicit Scheme to Clear Hillary Clinton and Frame Donald Trump.”

President Trump said this week he has no plans to fire Rosenstein. That’s too bad. And apparently, Attorney General Jeff Sessions – who seems perpetually missing in action and clueless – also has no plans to give Rosenstein a well-deserved termination of his employment, or to at least remove Rosenstein from supervision of the Mueller probe.

Rosenstein’s suspected misconduct and malfeasance, compounded by clearly disqualifying blatant conflicts of interest, demand that he step aside from overseeing the Mueller investigation. No one can have confidence in the credibility and integrity of any report on the Mueller probe with Rosenstein at the helm.

The latest evidence that Rosenstein is appallingly compromised comes from former FBI General Counsel James Baker. Baker reportedly told Congress last week that Rosenstein was “serious” when he proposed secretly recording the president to try to gain damaging information about him.

Rosenstein allegedly also talked about soliciting others to secretly record the president. But that’s not all. According to Baker, Rosenstein was also “serious” when he discussed recruiting Cabinet members to depose Trump under the 25th Amendment, in what would amount to an attempted palace coup.

The New York Times reported Sept. 21 that Rosenstein “suggested last year that he secretly record President Trump in the White House to expose the chaos consuming the administration” and discussed “recruiting cabinet members to invoke the 25th Amendment to remove Mr. Trump from office for being unfit.”

Rosenstein responded that “The New York Times’s story in inaccurate and factually incorrect.”

So how does Baker know that The New York Times story was in fact accurate?

Two people who implicated Rosenstein are former top officials at the FBI. They are Andrew McCabe, who was later fired as assistant FBI director, but was acting FBI director when Rosenstein’s machinations are said to have occurred. This happened right after disgraced FBI Director James Comey was fired on May 9, 2017.

The other person who implicated Rosenstein is Lisa Page, the FBI lawyer who resigned in May, shortly after she was implicated in the Justice Department inspector general’s investigation into official misconduct during both the investigation of Hillary Clinton’s emails and the Russia probe.

McCabe and Page were privy to Rosenstein’s alleged plot to remove President Trump from office. As reported by Fox News’ Catherine Herridge, these two individuals immediately sought out Baker and relayed the details of Rosenstein’s comments.

In a recent closed-door deposition with congressional investigators, Baker testified that he took McCabe and Page’s account “seriously.”

McCabe drafted memos to memorialize Rosenstein’s remarks. These memos were turned over to Special Counsel Mueller – but the FBI and Justice Department have refused to give them to Congress, in defiance of a lawful subpoena.

Rosenstein could provide the documents, but won’t. Is he covering up evidence of his own improper actions?

Rosenstein continues to insist that he “never pursued or authorized recording the president” or “ever advocated the removal of the president.”

Yet The New York Times maintains that its reporting was accurate and that “Mr. Rosenstein not only confirmed that he was serious about the idea but also followed up by suggesting that other FBI officials who were interviewing to be the bureau’s director could also secretly record Mr. Trump.”

A source told Fox News on Sept. 22 that Rosenstein’s “wire” comments about secretly recording President Trump were meant to be “sarcastic.”

Rosenstein has a history of claiming that his words were misinterpreted. In January, he allegedly threatened to subpoena emails, phone records and other documents from lawmakers and staff on the House Intelligence Committee in what was described as “retaliation” for the committee’s inquiries into the Russia probe. A Justice Department official denied the threat and claimed Rosenstein’s remarks were mischaracterized.

A similar episode happened in May when Rosenstein launched a “very personal and very hostile attack” on the same committee staff and Committee Chairman Rep. Devin Nunes, R-Calif., according to a congressional email documenting the meeting and corroborated by two additional sources.

Once again, a Justice Department spokesperson disputed the characterization, saying: “This is not an accurate portrayal.”

In other words, Rosenstein’s “screaming” rant and “childish behavior,” as it was described, were simply misunderstood.

Now we are expected to believe that Rosenstein was only being “sarcastic” when he allegedly schemed to surreptitiously record the president and try to depose him from office.

The truth is that Rod Rosenstein is either the most misunderstood man in Washington, whose words are forever being “misinterpreted,” or he is a petulant bully who tries to cover up his misconduct by peddling the same deceptive excuse again and again.

The answer should be obvious. Rosenstein has a history of abusing his position of power. When caught, he claims that everyone else is mistaken and confused.

On Thursday Rosenstein is scheduled to be interviewed behind closed doors by the chairman of the House Judiciary Committee. He will likely reach into his tattered bag of vacuous excuses and pull out the tired, but reliable, canard that his words about recording Trump and invoking the 25thAmendment were, once again, misunderstood.

I argued in a column two weeks ago that Rosenstein’s reported plot to overthrow the president was the equivalent of a coup attempt and should not go unpunished. Now there is even more incriminating evidence coming from Baker, McCabe, and Page that Rosenstein sought to overturn the decision of the American people to elect Donald Trump as our president.

President Trump may feel that firing his deputy attorney general just weeks before the midterm elections would be politically imprudent or unwise.

But Attorney General Sessions has both a moral and legal duty under federal regulations (28 U.S.C. 528) to direct Rosenstein to step aside from overseeing the Mueller investigation.

Sessions’ failure to remove Rosenstein as supervisor of the Mueller probe undermines the rule of law. Americans can have little faith or confidence in the fairness of the special counsel’s investigation if Rosenstein – the man who oversees it – stands credibly accused of harboring a severe bias against President Trump.

Moreover, Rosenstein has a conflict of interest so acute that no sincere debate could be waged on whether he should have recused himself at the outset. As explained in Chapter 11 of my book, "The Russia Hoax," ethical rules demand Rosenstein’s disqualification.

Rosenstein volunteered to author the memo recommending that Comey be terminated as FBI director. Since the firing is part of Mueller’s inquiry into potential obstruction of justice, Rosenstein is a witness in a key matter under investigation – and could potentially be charged with a crime by Mueller if he gave any testimony that was false or misleading.

Indeed, Mueller or his deputies interviewed Rosenstein last year. How can a pivotal witness in a case continue to play an instrumental role in an investigation over which he presides – the outcome of which is likely dependent on his own testimony?

How can Rosenstein sit in judgment on whether action should be taken by Mueller not just against President Trump, but possibly even against Rosenstein himself?

It is fundamentally wrong and unethical for Rosenstein to supervise a case in which he is a chief witness and to simultaneously judge whether a prosecution should be brought. That is tantamount to a prosecutor putting his boss or himself on the witness stand to testify in the very case he is prosecuting.

No one can be an investigator, witness, prosecutor and judge all rolled into one. Rosenstein plays each of these roles in a single case.

This is not the way the American system of justice is supposed to work.

Rosenstein’s failure to disqualify himself from overseeing the Mueller investigation is an extraordinarily serious lapse in judgment. Such conduct is strictly forbidden by the Rules of Professional Conduct for attorneys.

Rosenstein seems to think that the public should trust him, even in the face of the appearance of impropriety and a glaring conflict of interest. Yet, the record of his behavior – described as “emotional” and “erratic” – suggests that he cannot be trusted.

The deputy attorney general is accused of repeatedly threatening Congress and its staff. He has consistently suppressed documents under lawful subpoenas in an apparent attempt to cover-up wrongdoing by the FBI and the Justice Department.

Finally, Rosenstein affixed his signature to the final Foreign Intelligence Surveillance Act warrant application to spy on a Trump campaign associate, reportedly without sufficient or verified evidence and in violation of regulations governing such secret court orders. He refuses to hand over those relevant documents to Congress.

If Rod Rosenstein had an ounce of integrity or a conscience, he would step aside voluntarily. Unfortunately, the feckless Jeff Sessions cannot be relied upon to do what he must.

It's time for President Trump to reprise a catchphrase from his television days and tell Rosenstein, "You're fired."