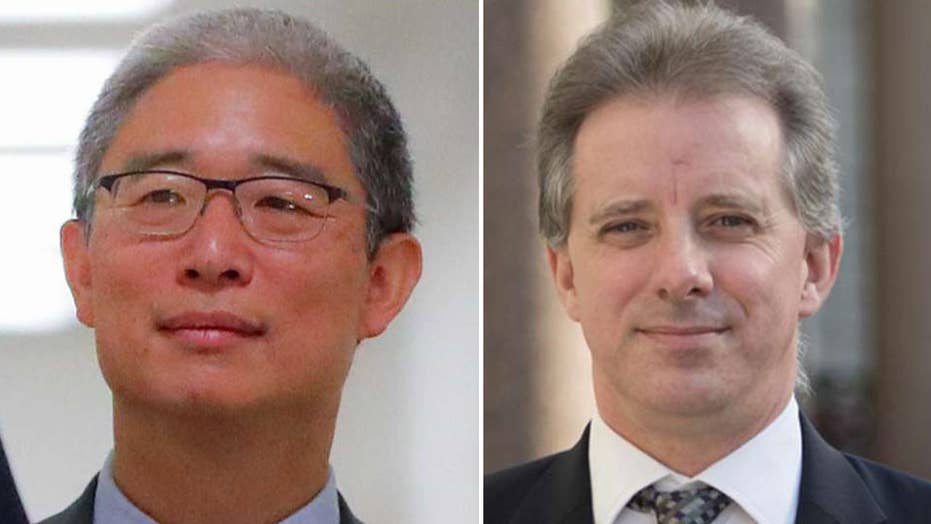 Prosecutors on Special Counsel Robert Mueller’s team investigating alleged “collusion” between the Trump presidential campaign and Russia knew all along that the anti-Trump “dossier” compiled by former British spy Christopher Steele that fueled their probe was biased and likely phony.

Yet instead of investigating those individuals at the FBI and Justice Department who actively participated in the dossier fraud – as he should have done – Mueller hired several of them to investigate Trump.

Newly confirmed congressional testimony of former Associate Deputy Attorney General Bruce Ohr shows that he warned both the FBI and the Justice Department that Steele was “desperate that Donald Trump not get elected.”

CLICK HERE TO READ MORE ON THE RUSSIA INVESTIGATION

This conspicuous bias should have been enough to deposit the dossier – a series of memos from Steele – into the nearest trash can. But top FBI and Justice Department officials were determined to damage or destroy President Trump. So they ignored Steele’s patent prejudice and sought to exploit his dubious document – despite Ohr saying of the dossier: “I don’t know how reliable it is.”

And incredibly, the officials concealed all of this vital information from the Foreign Intelligence Surveillance (FISA) Court in obtaining a warrant to spy on a Trump campaign associate. But that’s not all. They used the Steele report to launch the original Trump-Russia “collusion” investigation.

As Comey was twisting the facts and contorting the law to absolve Clinton, an FBI agent was meeting secretly in London with Steele, who had composed the first of his memos.

Three weeks later – on July 30, 2016 – Steele met with Ohr, who would serve as the conduit between the FBI and the former British agent, who was now on the Clinton payroll and being paid simultaneously by the FBI.

After meeting with Steele and the FBI, Ohr also shared his improbable intelligence with Justice Department officials Andrew Weissmann, Bruce Swartz and Zainab Ahmad. Weissmann and Ahmad were subsequently hired by Mueller as part of his assembled team of prosecutors.

It has now come to light that Ohr warned all of these FBI and Justice Department officials that Steele was riven with bias. They were also informed that the Clinton campaign and Democrats had paid for the Steele dossier through the company Fusion GPS and its founder Glenn Simpson, who also employed Ohr’s wife, Nellie.

Here is Ohr’s specific testimony to the joint House Judiciary and Oversight and Government Reform Committees that was elicited behind closed doors last Aug. 28, but that has not been fully made public:

Question: “So, the record is clear, what the Department of Justice and the FBI was aware of prior to the first FISA application was your relationship with Christopher Steele and Glenn Simpson, your wife’s relationship with Christopher Steele and Glenn Simpson, Mr. Steele’s bias against Donald Trump, Mr. Simpson’s bias against Donald Trump, your wife’s compensation for work for Glenn Simpson and Fusion GPS, correct?”

Ohr later added:  “I told them that Chris Steele was desperate that Donald Trump not get elected.”

Ohr also told congressional investigators that he knew the entire effort to target Trump was being financially underwritten by the Clinton presidential campaign. The FBI and Justice Department knew this, too.

Ohr said he warned the two law enforcement agencies: “You’re going to have to check it out and be aware. These guys were hired by somebody relating to – who’s related to the Clinton campaign, and be aware.”

None of the salacious and uncorroborated information in the Steele report was ever verified by Ohr. Steele refused to provide his alleged sources to Ohr. Most were anonymous and the information Steele collected was based on double and triple hearsay.

In British court documents, Steele himself confessed that his document was “unverifiable.”

Ohr admitted that the Steele dossier could never be used in a court of law. Yet, that is exactly what the FBI and Justice Department did. Their application to the FISA Court was based largely on information provided by Steele that they had failed to verify.

Even though Steele was fired by the FBI for lying, FBI and Justice Department officials nevertheless represented to the court that he was a reliable source. They l knew he was not.

These same officials deceived the judges by not fully revealing that the dossier had been paid for by Clinton’s campaign and that the source of their information had been discredited.

Justice Department regulations embrace the same rule and requirement. Relying on the unverified Steele dossier was a clear violation.

Beyond the regulations, it can be a felony to conceal relevant information and deceive the FISA Court. A half dozen statutes make it a crime to perpetrate a fraud on a court, including Deprivation of Rights (18 USC 242), Perjury (18 USC 1621 and 1623), and False Statements (18 USC 1001). Several obstruction of justice and fraud statutes would be applicable, as well.

Mueller’s special counsel team should be investigating Clinton “collusion” with Russia and the complicity of FBI and Justice Department officials.

Clinton’s campaign paid for Russian information that was fed to the FBI and Justice Department to damage Trump during the presidential election. According to Ohr, at least two of Mueller’s prosecutors – Weissmann and Ahmad – knew this all along. And so did two of his investigators, Page and Strzok.

Instead, Clinton’s opponent, Donald Trump, became the target of a dilating investigation based on the faulty and likely fabricated information she commissioned.

The investigation of Trump was a hoax from the outset. But now, the integrity of Mueller’s special counsel team has been compromised. The credibility of any forthcoming report should be viewed through the lens of deep skepticism.