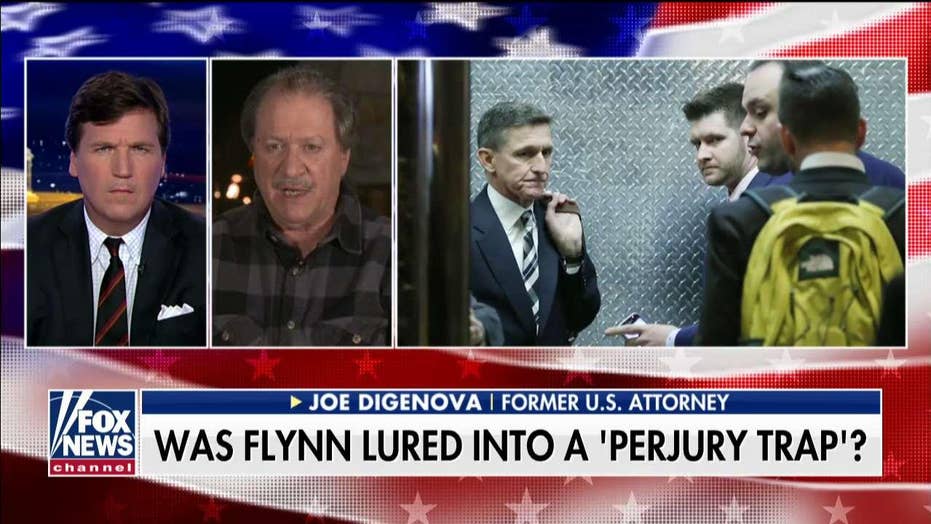 If you want a textbook example of wrongful prosecution of a man who should never have been charged with a crime, just look at the case of retired Army Lt. Gen. and former National Security Adviser Michael Flynn.

New documents released Friday by Special Counsel Robert Mueller make it clear that Flynn is a victim of an overzealous team of prosecutors absolutely desperate to show that President Trump and his campaign colluded with Russia to win the 2016 presidential election.

The new court filings provide yet more proof that Mueller will stop at almost nothing and run over anyone who gets in his way as he tries to build a case against the president after 19 months of his anti-Trump crusade.

Mueller doesn’t really care about Flynn. He wants to use Flynn to destroy Donald Trump.

Plain and simple, the information made public Friday shows that the FBI lied to Flynn to ensnare him in the crime of making a false statement, even though Flynn did not lie.

The new documents show without a doubt that Flynn never should have been prosecuted. They show that even the FBI agents who interviewed Flynn about his contacts with Russian Ambassador to the U.S. Sergey Kislyak concluded Flynn was telling the truth. But Flynn’s statements about those contacts later became the basis of the charge against him of lying to the FBI.

Plain and simple, the information made public Friday shows that the FBI lied to Flynn to ensnare him in the crime of making a false statement, even though Flynn did not lie.

During the transition as President-elect Trump prepared to take office, Flynn was the designated national security adviser for the incoming president. As a legitimate part of his job, he had conversations with Ambassador Kislyak. These discussions were perfectly legal.

The Obama administration secretly recorded the phone calls, illegally unmasked Flynn’s name, and then illegally leaked the information to the media. This gave Director James Comey’s FBI a vacuous excuse to contact Flynn to set a trap.

Comey and his top deputy, Andrew McCabe, put the scheme in motion on January 24, 2017, just after Trump became president. Comey admitted in an interview this week that he violated FBI protocols by deliberately taking advantage of a presidential administration that was only four days old and not fully organized.

McCabe telephoned Flynn at the White House and lied to the Trump adviser, telling Flynn he wanted to talk about the “significant media coverage” of the leaked story.

McCabe pushed Flynn not to have a lawyer present and lulled Flynn into believing the meeting would be just an informal discussion of no legal consequence. McCabe and the agents agreed in advance not to tell Flynn the truth – that they had in their hands a transcript of the secretly recorded Kislyak conversation.

Flynn’s recollection of the conversation did not perfectly match the transcript. But that, by itself, is not enough under the law to charge someone with “knowingly and willfully” falsifying a material fact. Besides, the interviewing agents determined that Flynn was not being deceptive and did not lie. That should have been the end of it. But it wasn’t.

Although Acting Attorney General Sally Yates “was not happy” about Comey’s scheme, she didn’t stop it. Instead, she joined in and marched over to the White House and engineered the firing of Flynn as national security adviser.

The plain truth is that if Mueller had been forced to prove his case in court against Flynn on a charge of lying to FBI, Mueller would have lost.

The new court filings make clear that Mueller’s mission has gone from prosecution to persecution – and Flynn has become “collateral damage” in what amounts to an out-of-control effort to overturn the decision of the American people to elect Donald Trump as our president.

Why did Flynn plead guilty if he didn’t commit a crime?

As I wrote in my book, “The Russia Hoax: The Illicit Scheme to Clear Hillary Clinton and Frame Donald Trump,” Flynn pleaded guilty not because he lied, but because Mueller crushed him financially and threatened to take legal action against the retired Army general's son. Flynn had to spend so much on defense attorneys that he was forced to sell his home, and Mueller’s prosecution made it impossible for Flynn to find employment.

Flynn has devoted his adult life to serving the United States, spending 33 years in the Army before taking the position of national security adviser for President Trump. He played a key role in developing our nation’s counterterrorism strategy and dismantling terrorist networks in Iraq and Afghanistan and rose to become director of the Defense Intelligence Agency.

Flynn’s reward for his decades of dedicated service? Being caught in the equivalent of a perjury trap set by the FBI, pressured to plead guilty to a felony charge of making false statements to the FBI when he was actually an innocent man, and now facing sentencing Tuesday. This is an enormous miscarriage of justice.

Even Mueller recognizes that Flynn does not deserve a long prison term. A sentencing memo Mueller filed in U.S. District Court in Washington earlier this month for Flynn recommends little or no prison time for the retired general.

And as I wrote in a column for Fox News published Dec. 5, the sentencing memo “isn’t a ‘smoking gun’ showing President Trump colluded with Russians to win the 2016 presidential election or did anything else illegal. In fact, the memo isn’t even a squirt gun. In terms of President Trump’s conduct, it amounts to nothing of any significance.”

The documents released Friday – some heavily redacted – were made public because U.S. District Judge Emmet G. Sullivan ordered prosecutors to turn over the government's files dealing with the FBI’s questioning of Flynn that led to the charge against him of lying to the FBI.

The judge ordered the files to be submitted to his court after attorneys for Flynn said the FBI discouraged Flynn from bringing a lawyer to the interview and said the FBI failed to advise him that he could be charged with a crime for making false statements. Those claims by Flynn’s lawyers are true, the new documents show.

The new material included notes taken by then-FBI Deputy Director McCabe after talking with Flynn to arrange for Flynn to be interview by the FBI.

Now that he has the new information, will Judge Sullivan want to know why Mueller charged Flynn with lying if the only witnesses (the FBI agents) determined he was not?

The judge may also want to ask Flynn if he pleaded guilty to a crime he did not commit. Was he coerced? Did the feds threaten to prosecute his son? Were there financial reasons that caused him to plead?

In addition, Judge Sullivan could ask Mueller’s team if they gave Flynn’s lawyers what is known as “exculpatory” evidence showing that the FBI concluded Flynn was telling the truth. Under law, they are required to do so.

The bottom line is that the only wrongful or illegal conduct involving Michael Flynn was the conduct of the FBI and the anti-Trump zealots that make up Robert Mueller’s team of prosecutors.

An innocent man and a patriot who spent his life defending our country has seen his reputation ruined, has been destroyed financially, and now faces sentencing for a crime he didn’t commit.

This is the kind of thing that happens in corrupt Third World dictatorships. It is not what should happen in the United States of America. Michael Flynn is the victim of a grave injustice and Robert Mueller, James Comey and everyone else involved in framing Flynn should be ashamed of themselves for their actions against him.