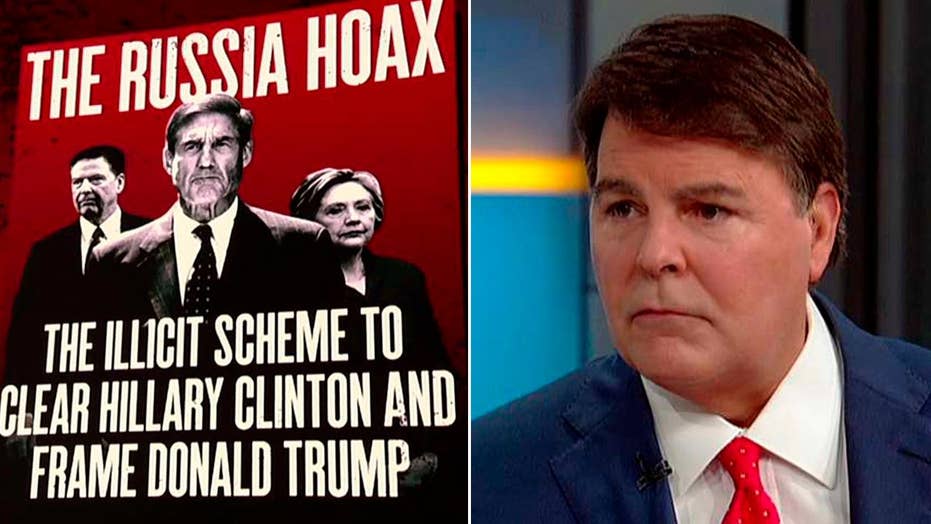 What readers can learn from 'The Russia Hoax'

In one of the more stunning revelations contained in the report compiled by the Justice Department’s watchdog, former FBI Director James Comey claimed he doesn’t remember the moment he decided – and put down in writing -- that Hillary Clinton had committed crimes.

We know that on or about May 2, 2016, Comey composed a statement summarizing Clinton’s mishandling of classified documents, concluding that she was “grossly negligent.” Those pivotal words have a distinct legal meaning, and are drawn directly from a federal statute, 18 U.S.C. 793(f), which makes it a felony to handle classified documents in a “grossly negligent” manner.

Comey used the exact phrase not once, but twice.

Based on Comey’s finding, Clinton should have faced a multiple-count criminal indictment, since the FBI discovered that she had stored 110 classified emails on her unauthorized, private computer server.  Other people had been prosecuted for similar conduct that jeopardized national security in violation of the law.  Yet, Comey – despite characterizing Clinton’s actions with the clear language denoting violation of the law - saw to it that no charges were ever brought against Clinton.

Based on Comey’s finding, Clinton should have faced a multiple-count criminal indictment, since the FBI discovered that she had stored 110 classified emails on her unauthorized, private computer server.

Under questioning, Comey admitted to the Inspector General Michael Horowitz that he authored the May 2 statement and penned every word of it himself. But then he offered the implausible claim that “he did not recall that his original draft used the term 'gross negligence,' and did not recall discussions about that issue.”

Comey’s amnesia is preposterous. He would have us believe that, as FBI director, he memorialized in print his decision that the leading candidate for president of the United States had committed crimes, yet later could not recollect anything about the most important decision of his career.

The truth is that Comey well remembers what he wrote, because he participated in subsequent discussions with top officials at the FBI about Clinton’s “gross negligence.” Several meetings were held on the subject and contemporaneous notes prove that Comey was in attendance. Those records show that although Comey was convinced that Clinton was “grossly negligent” in violation of the law, he was determined to clear her notwithstanding. To achieve this somersault and absolve the soon-to-be Democratic nominee, the legally damning terminology would have to be stricken from his statement.

Metadata shows that on June 6, the FBI’s lead investigator on the case, Peter Strzok, sat down at his office computer to cleanse his boss’s statement of the vexing term, “gross negligence.”  With the help of his paramour and FBI lawyer Lisa Page, the words “extremely careless” were substituted to make Clinton appear less criminally culpable. Page told the IG that “to use a term that actually has a legal definition would be confusing.”

It most certainly would. After all, how could Clinton be exonerated under the “gross negligence” law if that very phrase was used to describe her behavior? The phrases mean the same thing, but only one appears in the statute.

Strozk and Page also expunged from Comey’s statement his reference to another statute that Clinton had plainly violated. She should have been charged under the statute’s “intent” provisions.  With Comey’s consent and encouragement, the pair sanitized his findings of fact and contorted his conclusions of law. Clinton, who had not even been interviewed by the FBI yet, was free and clear. The investigation was a sham.

Comey may not have remembered writing the words that should have indicted Clinton, but he had complete recall of his inability to read the law. He told the IG he thought “Congress intended for there to be some level of willfulness present even to prove a ‘gross negligence’ violation.” If Comey had ever read the legislative history, he would have known that in 1948, Congress amended the original Espionage Act of 1917 to add a “gross negligence” provision that did not require intent or willfulness.

Amnesia must be contagious at the FBI. Testifying before Congress, Strzok feigned no recollection of using his computer to make the critical alteration that cleared Clinton. He did, however, directly implicate the FBI director.

“Ultimately, he (Comey) made the decision to change that wording,” said Strzok.

But wait, how could Comey order a change in the words he doesn’t remember writing?  Their stories don’t jibe. At least one of them is lying.

Strzok’s memory repression must be acute.  He also informed Congress he does “not recall writing” the infamous text message to his lover, Page, vowing to “stop” Trump from being elected president.

“What I can tell you is that text in no way suggested that I or the FBI would take any action to influence the candidacy,” Strzok insisted.

That is a remarkably dexterous explanation for something he does not remember doing.  When confronted with a myriad of other messages extoling Clinton and disparaging Trump, Strzok had the temerity to say, “I do not have bias.”  Later, “Those text messages are not indicative of bias.”

No one with an ounce of intelligence could possibly buy the self-serving rubbish that Strzok was peddling. This includes the inspector general who, after an exhaustive investigation, concluded that the Strzok-Page communications “are not only indicative of a biased state of mind but imply a willingness to take official action to impact a presidential candidate’s electoral process.”

Just as Comey, Strzok, Page and company conspired to clear Hillary Clinton, they likewise concocted their “insurance policy,” a scam investigation of then-candidate Donald Trump. The FBI had no legal basis to initiate its investigation into Trump and his campaign. Facts were invented or exaggerated. Laws were perverted or ignored.  The law enforcers became the law breakers.  Comey’s scheme to leak pilfered presidential memos in order to trigger the appointment of his friend, Robert Mueller, as special counsel was a devious maneuver by an unscrupulous man. Comey’s insinuation that the president obstructed justice was another canard designed to inflame the liberal media.  Sure enough, they became his witting accessories.

This is the story of “The Russia Hoax.”

Editor's note: This article is partly adapted from the author's new book "The Russia Hoax: The Illicit Scheme to Clear Hillary Clinton and Frame Donald Trump." (Broadside Books -- an imprint of HarperCollins, July 24, 2018).