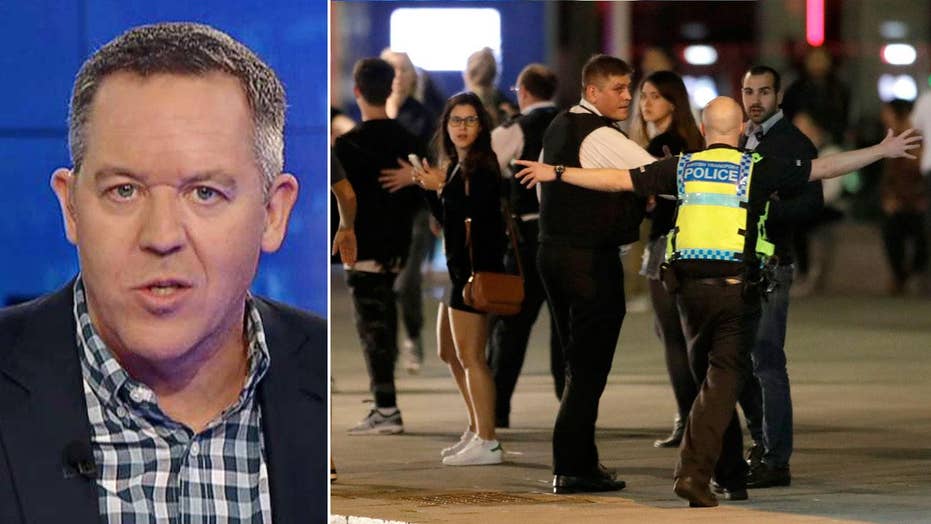 Greg Gutfeld on Terrorism: Take out the trash

Future anti-terror tactics must be unbending

After this recent attack in London, we learned another absurd fact: not only was one of the attackers known by anti-terror police, it’s been reported that he had been featured in a major documentary called “The Jihadis Next Door.”

This made me think of the rolling credits you see at the end of a film…which features dozens, sometimes hundreds, of names – from script doctors to producers to makeup to catering. How many of these people who worked on this particular project felt compelled to speak up, or do something, after personally observing the content of the film? Or was it just another job?

The authorities knew of this dirtbag, too. He’d been reported by acquaintances twice before. So, why wasn’t anything more done to prevent this ghoulish loser from carry out his cowardly deeds?

My belief, as always, is that there is a disturbing incentive - driven by media and politics - not to take that risk.

If an agent or officer acts upon information and is found to be wrong - what happens to him, or his reputation? The media, the activists and agenda-driven politicians would brand him a racist. A bigot.  Which, these days, is the scarlet letter that trumps all scarlet letters.

And if he's right, and we act on it and prevent an attack - then you will likely never know. So it's a lose-lose for the whistleblower. (Here's a big point: how funny is it that whistleblowers for government secrets are deemed heroic, but whistleblowers on terror must fear for their reputations!)

What’s more troubling, is how the media shifts its spotlight not on terrorists, but instead on anyone offering solutions to combat them.

Sure, it’s great to debate various measures – but the loudest critics of measures (the ban, vetting, changing laws, etc.), rarely offer any solutions to stop the madness, themselves.  Instead they condemn your suggestions, while offering tepid sentiments about love and compassion on Twitter. From their cowardly perch, they pronounce you bigoted, or incendiary, or hateful – further enabling terror.

So anyway - again let's imagine, instead, that someone had acted preemptively and stopped this latest terror attack in London. How would we know? A non-attack has few visuals for television, as opposed to an attack that’s been successfully pulled off.  The prevention of an attack prevents the public from seeing the results of the atrocity - which leads to a naive complacency. You stop the threat, then you stop people from seeing the threat.  This is the catch-22 we all face right now. To survive, our success requires that we pretend we didn’t succeed. How do we do that?

It’s like a vaccine. A vaccine eradicates a disease so well, that we forget the necessity of the vaccine. After measles vanishes, a segment of a community decides a vaccine is no longer necessary, and the disease returns. That's happened. It's astounding and absurd.

The more we crack down on terrorists, the more likely this short-sightedness returns.

When you bring up the case for the travel ban, the media response, in unison, is this: we’ve not had an attack from any of those countries since the 1970’s.

True. And perhaps the reason for that, is that we’ve stopped them. And we will stop more.

You can make this idea even more personal.

Let’s say you’re on a train. A man acts suspicious. You choose not to intervene - because you don’t want to look foolish, or bigoted. The man kills scores of passengers. You go home wondering why you hesitated.

Now change it: you’re on a train. A man acts suspicious. You intervene. And the man exits the train because you disrupted the plan. Passengers accuse you of succumbing to islamophobia. Your face is in the papers. You might have prevented an attack, but no one knows.

We've run that equation through our minds often, haven't we? Or, maybe it's just me.

Again, it’s that catch-22 - and it’s created by the threat of accusation of bigotry. We prevent action, for fear of being called out as racist. All we can do, now, is fight this idea with all the power we have.

It makes me think of an idea that really makes my brain hurt because I have no real answers.

But even though the act didn’t happen, the intent - and the organization behind it - would still exist. Just because it failed once doesn't mean the losers takes their ball and go home. Hardly. This is ALL they do.

It's brutal how it works. If we had prevented 9/11, there would have been no footage of it, and the optics of planes flying into buildings never would have existed.   The pressure to fight Islamic terror would have had no visual incentive. Which means, even if there was no 9/11, certainly without such a monumental trigger, there would have been a surprise 9/12 or a 9/13 or a 10/23. Meaning, just because we stopped one, didn’t mean we’d stop the next. They would have kept trying, till they pulled it off. And we (the general public and the soporific media) would not have been that concerned of this coming threat, because the smart souls had prevented the horrific ugliness of 9/11.

It’s the wake-up call of 9/11 that  led to preventions of other attacks and catastrophes. It's its great legacy, and I hope this legacy will last, but I’m not sure.  We live in a society of skittish, myopic short-attention spans.

Remember, 9/11 was the second attack on the World Trade Center. We were warned. Did we even remember THAT?

When an attack is less successful, or prevented entirely - for the media, and the population busy doing other things in life - it's like we pretend it never happened at all.

That kind of thinking must stop. Or we are doomed. Truly.