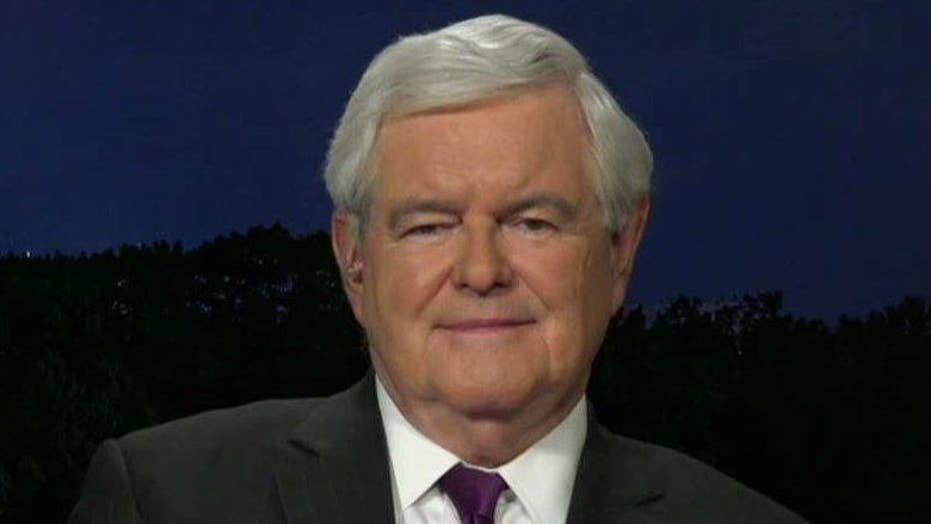 Former House speaker goes on 'Hannity' to weigh in on GOP agenda, revelation that Trump did not tape Comey

To pass a tax cut bill this year, Congressional Republicans should start outlining and explaining their plan for deep tax cuts now. Their survival in the 2018 elections will depend on it.

Republicans must ensure that they create a level of economic growth that stands in stark contrast to the weak Democratic economy of the past years (which has been the slowest economy in modern times). But if voters only hear about planned prosperity, the GOP message will fall flat.

Only substantial tax cuts will trigger the rapid job growth needed for Republican success in 2018. But time is running out and to pass tax cuts this year, action is needed now.

Consider what we have learned from the first six months of the effort to repeal ObamaCare – an issue Republicans have been virtually unanimous on for seven years, and we still have no real replacement plan capable of passing the House and the Senate.

The current Republican communications system has failed to explain and sell the repeal of ObamaCare. Does anyone think they will have better luck explaining and selling a complicated tax bill?

Republicans, in theory, have been discussing and thinking about this for seven years, yet their communications strategy has been so ineffective, confusing, and disorganized, that the Republican House version of the bill is now less popular than ObamaCare – which is actively imploding.

So, the obvious lesson from the first six months of the President Trump-Congressional Republican system is that everything takes longer, is harder to legislate, and is even more difficult to communicate than anyone expected on January 20 at the Inaugural.

Despite this tough lesson, the senior leadership continues to talk and plan as though things will be dramatically easier for the Republican tax bill.

There is talk of describing a tax bill in September, holding hearings in October, and passing it in November.

That legislative schedule is a recipe for disaster. It leaves no room for error and assumes every Republican will blindly get on board. The odds are overwhelming that such a tax bill would not pass until the spring of 2018, at the earliest, which is too late to impact economic growth and job creation before the mid-term elections.

Worse, it seems as though Republicans are inclined to take a complicated approach that has a lot of moving parts. This will result in various groups getting hit with tax increases, complicated deductions, and other so-called reforms.

This also sets the stage for a significant amount of opposition – including a tremendous effort by K Street lobbyists to ensure the protection of their clients.

The current Republican communications system has failed to explain and sell the repeal of ObamaCare. Does anyone think they will have better luck explaining and selling a complicated tax bill?

If Republicans really want a tax cut bill signed into law in 2017, (the highest priority for those who wish to survive their next elections) they need to completely rethink the current schedule and the proposed complexity.

Here is an alternative, month-by-month, strategy that would have the greatest likelihood of succeeding.

By the end of July, Republicans should be able to easily describe the basics of a simple, but large tax cut bill. For example, it could include:

• And a consistent system for businesses to regularly repatriate foreign earnings from overseas.

Combined, these policies should have a substantial job creation and economic growth impact, and I detail each of them in my new # 1 New York Times best seller, "Understanding Trump."

Additionally, as I wrote last month, tax cuts should be paid for through spending reforms and with increased government revenue from assets and economic growth.

That’s right, tax cuts can increase federal revenue. The Joint Committee on Taxation and the Congressional Budget Office claimed in 1997 that cuts in the Republican-drafted Taxpayer Relief Act would add $27.9 billion to the deficit by 2000. However, we passed the law and brought in $346 billion in revenue – creating a $290 billion surplus by 2000.

So, if Republicans craft a simple, explainable, consensus tax bill – without throwing in controversial policies – they can set the stage for effective communications.

To kick off the public campaign, Republicans should then proclaim August "Job Creation and Economic Growth Month." They should coordinate with their delegations and hold town hall meetings about job creation and economic growth in their districts. The best way to build support for the Republican agenda is to organize grassroots efforts at home. Republicans should petition support from every group that would win with this bill.

The president, vice president, and every cabinet member should also give at least three speeches in favor of the 2017 Job Creation and Economic Growth Act to maintain the national focus.

By September, Republicans should hold parallel hearings in the House and Senate. The first week of October should be spent moving the tax cut bill through the House. Then they should spend the next three weeks getting it passed in the Senate.

Finally, in November, the House and Senate should conference the bill and pass it by mid-month in time for a Thanksgiving week signing ceremony.

Any strategy that includes a longer timeline and a more complex bill will almost assuredly doom a 2017 tax cut. That will make the 2018 election very tough for the GOP.