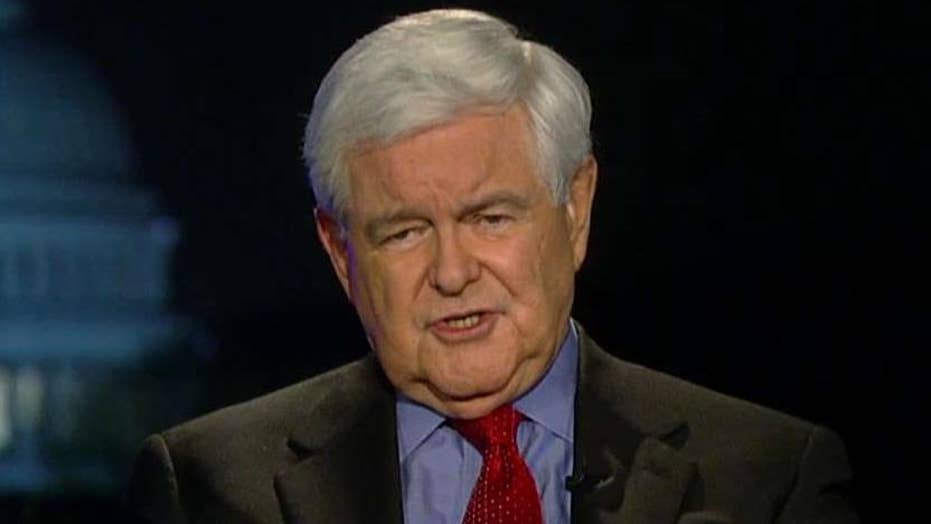 Gingrich: The Democrats are in a state of shock

On 'The Kelly File,' the former House speaker reacts to Democrats' plans to oppose the Trump administration

In Washington when people say they want to put an idea "on the table" it’s important to ask on whose table will it be.

All too often Republicans win elections only to lose their negotiations in Washington.

When I was Speaker we made sure that we set the table and defined the agenda. This is how we reformed welfare, achieved the largest capital gains tax cut in history, and balanced four budgets.

After we were elected as the first Republican House majority in 40 years, I announced just three days later that as Speaker I would be “very prepared to cooperate with the Clinton Administration," but that I was “not prepared to compromise.” Referring to the Contract with America, I said “We’re going to try and pass all 10 items, period…and we're not going to compromise on that."

When I was Speaker we made sure that we set the table and defined the agenda. This is how we reformed welfare, achieved the largest capital gains tax cut in history, and balanced four budgets.

A year later, during the budget negotiations, I said again, "We will cooperate with the president to reach an agreement but we will not compromise."

Standing firm by inviting your opponents to negotiate at your table within your parameters -- while refusing to be lured into allowing them to set the terms of the negotiation -- is vital if you want real change.

I was reminded of this on Sunday. I was on ABC's "This Week" with Democratic National Committee Chairwoman Donna Brazile as she suggested "there are also other Democrats who are saying, look, put something on the table. Let us work together."

Democrats understand that their values, their interest groups and their power structure are all under siege.

Now that they can no longer hide behind President Obama's personal popularity they have begun to realize how badly the Democratic Party has decayed during his presidency.

Today there are over 4,100 Republican state legislators (the most in history), 34 Republican Governors, 52 Republican Senators and 239 Republican House members.

Faced with the fact that the Democratic Party is weaker today than at any time since President Franklin Delano Roosevelt created the New Deal majority in the 1930s, Democrats are scrambling and finding themselves in three camps.

The ‘Hard Left’ camp is headed by Senator Elizabeth Warren and Senator Bernie Sanders. This is the true faith, socialist, and big bureaucracy is good for America, camp. Congressman Keith Ellison is a good example of this anti-Israel, pro-government wing. This wing will offer bold, radical government solutions and hope to build an ideological majority.

The ‘Hard Partisan’ camp is led by Minority Leader (former Speaker) Nancy Pelosi who seems to have learned nothing from her party's collapse under her leadership (from 257 the year President Obama was elected to 196 this year). Pelosi's model will be to fight virtually every day, on every issue and try to rebuild the partisan base.

Third, there is a smattering of Democrats who are interested in working with the incoming president. This is a small group so far but as the Trump program develops there might be a real opportunity to grow a Trump wing of the Democratic Party.

The challenge to President-elect Trump and to the congressional Republicans is to insist that the negotiations be defined and built upon the values they have collectively created.

School choice, for example, is central to the Trump vision of hope for poor children. Any Democrat who wants to help think through and improve a school choice initiative should be invited to the table. Those Democrats who insist on trapping poor children in bad schools should not be part of the discussion.

President Reagan attracted Democrats to his positions while convincing the American people that he was right. When we passed his three-year tax cut proposal, the heart of his economic recovery program, one out of every three House Democrats voted with us. We didn't go to them. They came to us because of public pressure and because they thought we were doing the right thing to get the economy growing.

As you watch the next few months, check to see who is setting the table: the new administration or the Democrats. Then you will know if we are making progress or being sweet talked into bad ideas.