Tucker: Future of our country is at stake in Georgia Senate runoffs

A year ago at this time, the biggest story in the world was getting almost no attention in our country.

A terrifying new form of the coronavirus was spreading through central China. From the very first moments of the outbreak, it was clear to many scientists it may have been engineered by the Chinese government and escaped from a lab in Wuhan.

For a variety of reasons, the people in charge of this country didn't want to talk about it. So instead, they told us that the biggest thing happening on Jan. 4, 2020 was the impeachment of Donald Trump, and nothing was more important than removing him from office. Trump's crime, you may remember, was a 30-minute phone call with the president of Ukraine. In that call, Trump suggested there might be something corrupt about Joe Biden's son making $40,000 a month from a Ukrainian energy company, despite having no relevant work history in either Ukraine or the energy business.

Fast-forward a year later and the people in charge are saying pretty much the same thing: Donald Trump must be impeached over a phone call.

GUTFELD ON THE MEDIA UPROAR OVER TRUMP'S GEORGIA PHONE CALL

On Saturday, the president spoke to the secretary of state of Georgia for about an hour. They talked about vote counting in Georgia. The president, as you may have heard, believes the election was stolen from him. Georgia's secretary of state, whose job it is to oversee elections, disagrees. You ought to listen to the call yourself, and you can make up your own mind about who's right on that question.

No matter what you conclude about vote counting in Georgia, we're willing to bet that you won't decide Donald Trump's latest phone call is the single most important thing happening in the world right now, yet CNN is claiming that it is. Why are they doing that?

Here's one guess: On Tuesday, there are two U.S. Senate elections in Georgia, and the outcome of those races will determine who controls the entire U.S. government. If the Democrats win both races -- and at this point, that is entirely possible, even likely -- the Democratic Party will run everything in Washington and they will be able to do whatever they want.

It's hard to remember the last time that more power was at stake in a single day, and if you thought about that long enough, you might decide to get involved. The Democratic Party and its marionettes in the news media would rather you didn't get involved, and so they're encouraging you to think about Trump's phone call instead. If they didn't, you might start asking bigger, more disruptive questions.

Here's one question: How exactly did Joe Biden win more votes than any other presidential candidate in the history of the United States? After 50 years of uninterrupted mediocrity in Washington and two spectacularly unsuccessful presidential campaigns in which he was rejected resolutely by Democratic primary voters, did Americans suddenly decide they wanted to be led by Joe Biden?

No, that's not what happened. What happened was the people in charge rigged the game. Joe Biden got his party's nomination for one reason: Because Bernie Sanders turned out to be more popular than anyone expected him to be. Sanders was an actual threat to the Democratic establishment. He talked about changing tax rates, so they crushed him. Out of nowhere, CNN told us that Sanders was violent, sexist, a danger to women everywhere, even a Russian asset.

Within days, Bernie Sanders melted away and Joe Biden got the job. No one expected that, least of all Biden. Once he was chosen, virtually every power center on earth joined the cause. Big business, Wall Street, the defense establishment, big pharma, the permanent bureaucracy in Washington and above all, Silicon Valley worked tirelessly from the day Biden got the nomination until Election Day to bypass voters and get him to the White House.

Google changed its famed algorithm to obliterate traffic to websites that criticized Joe Biden. Facebook and Twitter did essentially the same thing. If that's not rigging an election, there's no meaning to that phrase. The people who control the flow of virtually all information in English became unpaid consultants to the Biden campaign.

Apart from Fox News, pretty much every major media outlet in the United States is beholden to Silicon Valley. Referrals from search engines and social media sites generate revenue that news organizations need to survive. So if you mess with Big Tech, you die. Those are the new rules, and they are unsustainable. You can't have a democracy in a system like that because people can't get the information they need to make informed decisions. You bypass the First Amendment.

But if Democrats take over the entire federal government Tuesday, there will be no way to stop it. In fact, it will accelerate because it benefits a specific political party. So don't think about that. Donald Trump's phone call is the real story.

You'll have plenty of time to think about what happened on Tuesday come Wednesday morning when Democrats are in charge and there's nothing you can do about it, now or ever. On Monday, House Speaker Nancy Pelosi, D-Calif., came out in favor of D.C. statehood. That's plainly unconstitutional, but that's not the point. The point is two more Democrats in the United States Senate, probably four if you include Puerto Rico. That's a permanent new majority. That means you have what's called a one-party state, and that means the game is over. That's coming at high speed. Just be sure not to think about it.

And while you're at it, don't think about the Democratic candidates who are running for the United States Senate in Georgia. One of them is 33-year-old Jon Ossoff, and he has done literally not one impressive thing over the entire span of his life. Yet he could easily win because you haven't been paying attention. The other candidate is Rev. Raphael Warnock. He, by contrast, has done a lot of things. Here's one of them. 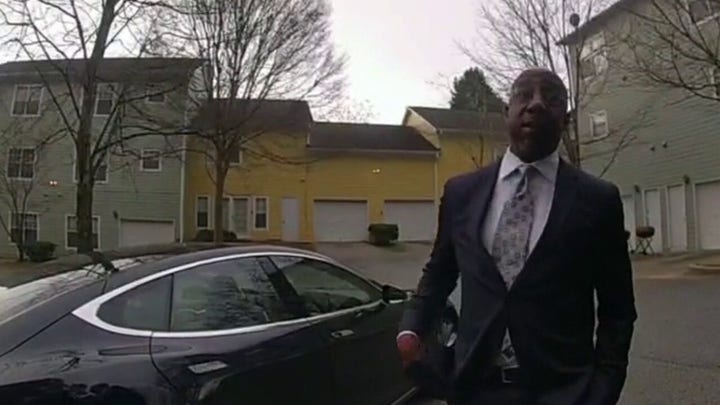 Now, situations like that are "complex domestic situations," as the police call them, and we don't pretend to know the whole story or have all of the context. We do believe that in a democracy, when someone is running for the United States Senate in a race that could tip the balance completely in favor of one party that will then control the entire U.S. government, you probably ought to know that and the candidate ought to answer questions about it. It is domestic abuse that's being alleged, after all.

"Tucker Carlson Tonight" aired that footage almost two weeks ago and pretty much no one else has since. It's been roundly ignored because domestic abuse isn't relevant when powerful Democrats commit it, apparently. By the way, what does Raphael Warnock have to with Donald Trump's phone call? Nothing. So just relax. We'll see you Wednesday.

This article was adapted from Tucker Carlson's opening commentary on the Jan. 4, 2021 edition of "Tucker Carlson Tonight."