US sends warships to Mideast as warning to Iran

Secretary of State Mike Pompeo says Iran could be planning a possible attack on US forces in the Middle East; national security correspondent Jennifer Griffin reports from the Pentagon.

The USS Abraham Lincoln Carrier Strike Group's mission in the Persian Gulf is not only to deter burgeoning Iranian influence in the region but to also act on specific intelligence relating to Iranian plans to attack U.S. personnel and interests in Iraq and Israel.

In the last three years, Iran has solidified its control over much of Iraq, threatening the balance of power in the region and building a land bridge to Jordan. The United States facilitated this dangerous combination by first removing Iran’s key opponent in 2003, Saddam Hussein – of which now-National Security Advisor John Bolton was one of the key neocon architects – and then in 2015 eliminating sanctions on Iran in order to facilitate the ill-advised Iran Nuclear Deal, named the Joint Comprehensive Plan of Action (JCPOA).

President George W. Bush’s neocons who sought democracy in Iraq failed to strategically wargame the second-order impacts of removing the other criminal on the street corner with Iran, Hussein. The obvious result of a weakened Iraqi military coupled with a Shi’a government has manifested itself in strengthened Iranian influence and presence throughout Iraq and Syria.

Instead of countering the growing threat and reading the strategic miscalculation in Iraq for what it was, the Obama administration exacerbated the situation by normalizing Iran’s terror ties and regional ambitions, as well as their hatred of the U.S. and Israel. Obama and Secretary of State Kerry peddled Iran’s terrorist appendages of Hamas and Hezbollah as social groups and ignored Iran’s longstanding designation as a state sponsor of terror. Obama’s naivete coupled with that of sycophants in then-Director of National Intelligence James Clapper and former CIA Director John Brennan, led to the disastrous Iran nuclear deal that pumped the brutal Persian regime flush with cash. 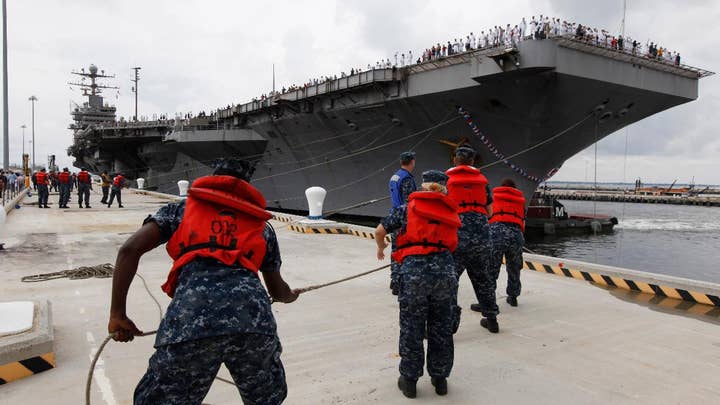 Today, Iran is poised for hegemony in the Middle East and especially armed to spread its wings. However, the Trump administration’s new sanctions and powerful approach to Iran has the country feeling the economic pinch. Iran realizes that its time to act is now. U.S. designation of the Iranian Republican Guards Corps as a terrorist organization highlights the country’s confluence with Hamas and Hezbollah. Moreover, Hamas’ recent attacks from Gaza on Israel civilians are part of the Iranian grand strategy to eliminate Israel and drive the United States from the region.

President Trump is responding to specific threats against our 5,000 military personnel in Iraq and against our allies in the region, such as Jordan, Saudi Arabia, and Israel. Having recently spent a week with the Israeli Defense Forces in Gaza, Galilee, and the Golan Heights, it is clear to me that this week’s attacks by Hamas are a harbinger of more violence to come and as is obvious, are a part of a larger Iranian plot in the Middle East.

Politicians in the United States such as Reps. Ilhan Omar and Rashida Tlaib who support Hamas and Hezbollah need to either visit Israel to witness the precarious geopolitical position of our chief ally in the region, or they should leave Congress to support our enemies and those of our allies. Until then, they should not as representatives of the United States Congress be supporting terrorists.

The deployment of the Lincoln Strike Group is necessary to protect U.S. vital interests and our servicemen and women should have the full support of Congress behind them in their efforts to defend our liberties.