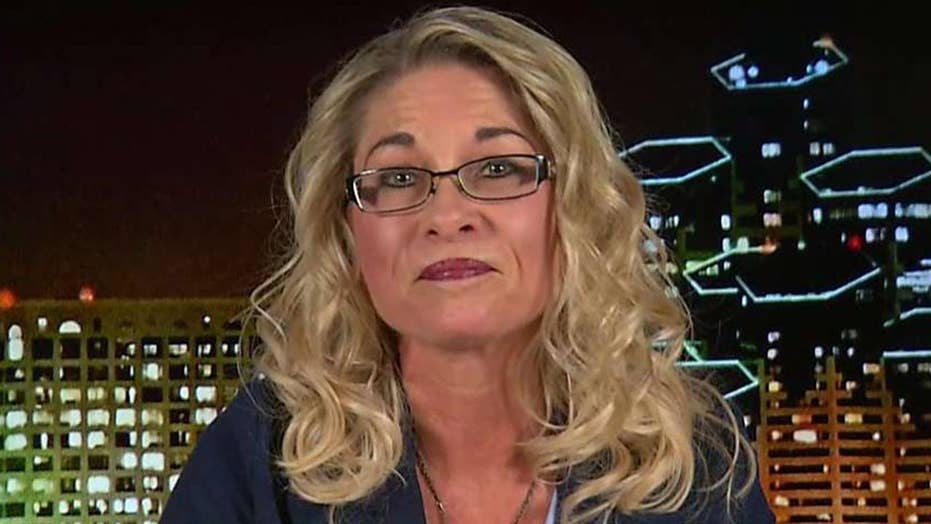 The miscarriage had just happened, and we were all devastated. I held my precious niece or nephew in the palm of my hand and marveled at the perfect little face, tiny lips, eyes, ears, arms, long legs, ten teeny fingers, ten adorable toes.

This was the 1980s. Americans were being told babies in the womb were only “fetuses” and “lumps of tissue.” Common sense unmasked their propaganda but, to me, nothing defied Planned Parenthood’s lies more loudly than the human evidence in my hands. Life is precious. Babies in the womb, no matter their gestational stage or what abortionists claim, deserve life.

This is the truth Abby Johnson realized while working at Planned Parenthood. The recent movie “Unplanned” depicts her heart-wrenching experience working there. My family saw the film — none of us have slept well since. Murder is always bloody; abortion is no exception.

Years ago, as a California teacher, I was shocked to learn that state and national teachers’ unions collude with Planned Parenthood. They use teacher dues money and resources — behind our backs and against our wills — to bring the abortion industry into our schools. Many of our nation’s public schools require teachers to instruct children as young as 12 on how and where to obtain birth control — including the morning-after pill and abortions — without parental knowledge or permission. If teachers refuse to teach this, the law mandates “experts” like Planned Parenthood take over the classroom.

Throughout my 28-year career, I was forced to fund the California Teachers’ Association (CTA) and the National Education Association (NEA), and I personally witnessed their zealous devotion to abortion and the far-left sexual agenda. They even helped lead The Women’s March.

Unions also work with the ACLU, Southern Poverty Law Center, GLSEN (Gay Lesbian Straight Education Network), SIECUS and many other far-left groups to push a radical sexual agenda onto our kids and to punish teachers, parents and students who dare to speak out against it.

For example, pro-life Christian teachers have been spit upon by NEA activists. When they dared to produce medically accurate evidence seeking balance in NEA sex education policies, union activist teachers told them, “There’s a special place in hell for people like you.”

Judy Bruns is a Christian teacher who was mocked and shunned by leaders of the Ohio Education Association and the NEA for daring to represent the voices of pro-life teachers. At her first NEA Representative Assembly meeting, she went up to the microphone in front of over 8,000 educators.

Wary that union leadership would twist her words, Bruns asked three specific questions, each carefully begun with the phrase, “Through the words ‘reproductive freedom’ in our resolutions document, does the NEA support:

The answer to all three of her questions was, “Yes,” but the last question received an additional response of, “We have no restrictions.” or “We have no limitations [on abortion].” Judy couldn’t remember if they said “restrictions” or “limitations,” but the stance unions take on behalf of millions of teachers is clear.

The good news? Pro-life teachers no longer have to fund the unions’ greedy, heartless abortion agenda.

David Schmus, a former teacher and executive director of Christian Educators Association International (CEAI) did some detailed research showing nearly $800,000 of roughly $1 million in donations by the NEA to a 2014 PAC was directed to Planned Parenthood. Schmus rightly points out a hard truth, writing, “Union dues paid by teachers who love children are being funneled to an organization that not only violently ends their lives, but apparently makes a profit off their body parts.”

The good news? Pro-life teachers no longer have to fund the unions’ greedy, heartless abortion agenda. Thanks to a lawsuit (Friedrichs v. CTA) brought by 10 California teachers and CEAI, and another suit brought by an Illinois government employee named Mark Janus, we’ve convinced the U.S. Supreme Court that forced union dues are unconstitutional. You can now opt out and pay unions nothing.

As a teacher, the thought of leaving the unions might be terrifying. They’ll tell you you’ll lose your pay, pension and liability insurance if you reject them. They’re lying to you, just like they did about their support of abortion. Thankfully, there are great organizations (like CEAI) providing superior services without the union tentacles. You can learn more about opting out of union membership, connecting with CEAI and other loving teachers who share your values here.

I’ve always been pro-life, but holding the lifeless frame of my miscarried niece or nephew vividly reinforced that belief. The on-screen testimony of a Planned Parenthood clinic director-turned-pro-life-advocate confirmed what I already knew — abortion painfully, violently and permanently ends a baby’s life and scars even more. That’s one reason I sued the unions. So, pro-life teachers, abort your unwanted union membership. Our values and our children are at stake.

Portions of this editorial have been adapted from Rebecca’s book, Standing Up To Goliath.