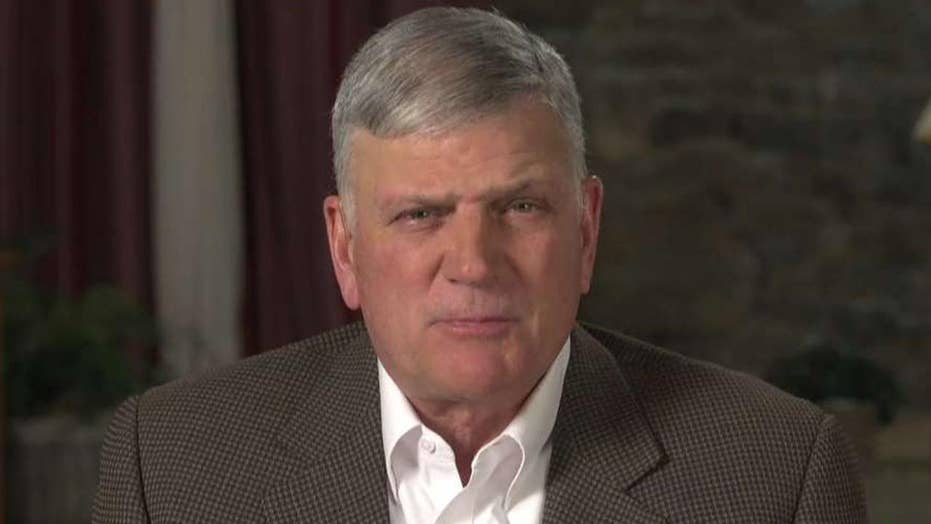 Rev. Franklin Graham: If Trump succeeds, we all succeed

One of the nation’s most prominent Christian leaders said he fears President Trump is facing a grave domestic threat by forces who want to take over the White House.

"I believe we are in a coup d'etat," Franklin Graham said Wednesday on the "Todd Starnes Radio Show." "There are people in this country who are wanting to destroy the president and take over the government by force."

Graham revealed his concerns as congressional Republicans ramp up accusations that deep state actors within the FBI and the Justice Department may have been plotting against the president.

The evangelical leader did not name names, but he suggested the mainstream media was complicit in the silent coup. Click here to listen to the shocking interview.

"They are not going to use bullets. They are using the media – to plant thoughts in people's minds that he's incompetent, that he's dangerous, that you can't trust him with nuclear weapons, that he is mentally unstable," Graham said.

Graham and other Christian leaders have been targeted in recent days by the mainstream media for their unwavering support of the president. Many have been accused of hypocrisy for backing a man who is accused of cheating on his wife and using profanity.

“I have a very simple admonition at this point,” Michael Steele said on MSNBC’s “Hardball.” “Just shut the hell up and don’t ever preach to me about anything ever again. I don’t want to hear it.”

Steele, the former head of the Republican National Committee, was furious at evangelicals.

“Yes, evangelicals, conservatives, they gave him a mulligan,” he told CNN. “They let him have a do-over. They said we’ll start afresh with you and we’ll give you a second chance.”

Both Graham and Perkins pointed out that Trump’s alleged sinful transgressions occurred long before he took the oath of office. On the other hand, Bill Clinton’s admitted indiscretions not only happened during his presidential term – they literally happened in the Oval Office.

“Just shut the hell up and don’t ever preach to me about anything ever again. I don’t want to hear it.”

So how does Graham respond to Trump’s admitted sinful past?

“We are all flawed people,” he told the "Todd Starnes Radio Show." “The president is a sinner. Franklin Graham is a sinner. We are not perfect people.”

He called the accusations against the president unfortunate and distracting.

But for now – Graham said he still supports President Trump.

“He’s not perfect, but he’s our president,” Graham said. “He said he didn’t do it. I have to take his word over that of the media – that is trying to lynch him.”

However, should evidence come to light that Trump had engaged in such behavior while in office, Graham said he would speak out with condemnation.

"We need to pray for those that surround the president that God will protect them and keep them safe," he said.

During the 2016 presidential election, Graham declined to endorse a candidate. He also held non-political prayer rallies at every state capitol in the nation. There was a reason for that.