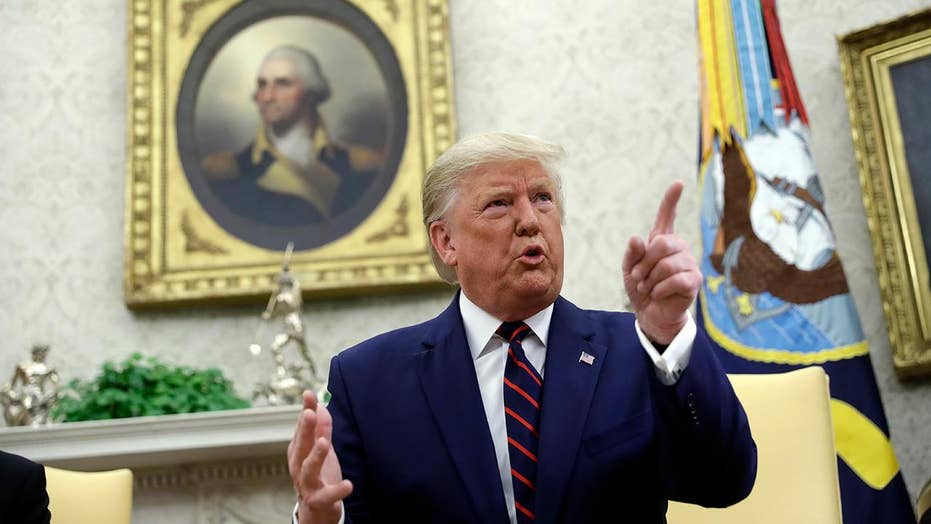 As the author of an action guide on how to navigate office wars, false accusations, political correctness in our workplaces – and yes, even political inquisitions – I see the attempt to impeach President Trump as an opportunity for Trump to turn the Democrats’ rash attack back on them.

But first, a word of caution to all who might take this advice in their own careers: This strong approach only works for those who are falsely or unfairly accused.

Trump needs to keep his head

The kind of political judo necessary here only works when, as Rudyard Kipling wrote in his great poem “If,” you “keep your head when all about you are losing theirs and blaming it on you.”

HANNITY RIPS 'SHIFTY' ADAM SCHIFF OVER NEW WHISTLEBLOWER REVELATION: 'THIS IS WHY AMERICANS HATE THE SWAMP'

If Trump loses his temper in public, he loses. He needs to control himself. This doesn’t mean he shouldn’t show emotion. He should. He just needs to show self-control.

The same, by the way, goes for anyone accused of transgressions in the workplace. Losing your cool will only appear to validate the accusations. If you are wrong, or, as so often happens, partially to blame, keeping your head in such a crisis will help you resolve the issue in the least detrimental way to your career possible.

The Trump administration needs to keep an honest accounting

Many people who are accused of workplace harassment or related issues simply believe that right – meaning their point of view – will prevail. Truth, justice and the American way, after all, is in our national DNA.

Good people also tend to believe how they see themselves is how others see them. As a result, people often go unprepared into meetings that can end their careers.

Conversely, those who are being harassed or otherwise treated unfairly in a workplace often fail to keep detailed records – voicemails, emails, written accounts, corroborating accounts – of the offenses.

In this case, Trump was accused of serious wrongdoing and Democrats moved for impeachment before they even had all the facts. Now the case is being tried in the court of public opinion as a prelude to a possible impeachment vote in the House of Representatives.

The Democrats have labeled President Trump a liar, but in an important way he is actually the most honest president we’ve ever had; after all, unlike so many politicians, he actually says what he really thinks.

The Trump administration has done a good job so far of undoing the spin by releasing records of what really happened. It needs to keep doing this.

Trump needs to transcend the hate

No one rose above hate better than President Ronald Reagan. The mainstream media were hardly his friend, but he was disarmingly polite and funny even with them.

Reagan was a strong gentleman. Trump is much more willing to muckrake than Reagan. Trump will call people names, he will fire people over Twitter and he often speaks in ways that can be spun and easily taken out of context.

Trump’s redeeming characteristic is that he does have charm. When at his best, Trump’s sense of humor can transcend the hate. This is a big reason why he won in 2016. It is something he needs to continue.

Trump needs to continue to be honest

The Democrats have labeled President Trump a liar, but in an important way he is actually the most honest president we’ve ever had; after all, unlike so many politicians, he actually says what he really thinks. He does this even if – and this must drive his staff crazy – what he thinks is evolving.

No president has spoken to reporters as openly as Trump. Trump needs to continue to do this. This approach is disarming and it enables Trump to speak outside the establishment media’s filters.

This honesty is also in glaring contrast to the spin, anger and political games Democrats are now trying to get away with. This is evident to all but the most extreme partisans on the left.

Trump needs to keep his sense of humor

A sense of humor in a tense and accusatory situation is very disarming and it shows confidence. Trump has done this before; for example, when on the debate stage in 2016, Trump was asked about some derogatory things he’d said about particular women. Trump busted in to say, “Only Rosie O’Donnell.” The audience laughed and the attack fell flat.

Trump needs to speak directly to the American people

People who are falsely accused should be careful about distancing themselves too much from those who might stand in judgment of them; this includes, in Trump’s case, the American public.

Rivals will often try to dehumanize their opponents, as it makes it much easier for them to fit that person into a certain category.

It might be too soon for President Trump to give a talk from the Oval Office on the impeachment attempt against him, but it is not too soon for him to do media interviews. President Trump arguably won the presidency by using social media to speak directly to voters. He is using Twitter effectively now. He also needs to give more Fox News interviews.

Although a gentleman should ideally be composed and stoic in the face of adversity, there is a time when they must use rhetoric effectively. This is advice is so true it is ancient; for example, read Cicero’s “Philippics”– the fiery speeches Cicero gave as he fought Mark Antony for the future of the Roman Republic. You’ll see that sometimes a statesman or a citizen must loudly proclaim what is true.

If President Trump does all of this, he’ll continue to see public sentiment shift his way. That may or may not stop the impeachment vote in the House, but it will turn this rash attack against the Democrats in 2020.