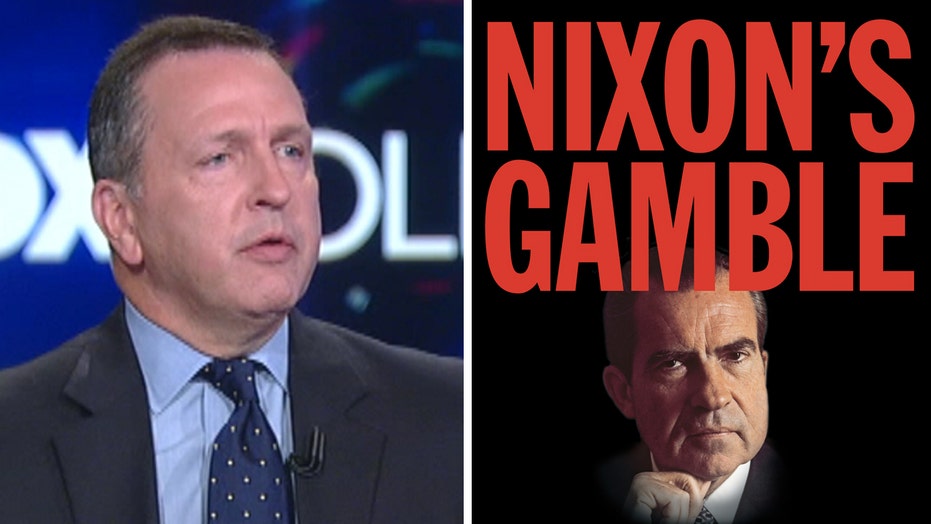 The story behind the collapse of the Nixon presidency

For Ray Locker, Ohio native and veteran journalist, now the respected Washington enterprise editor of USA Today, there are deadlines and stories, exclusives and series, routine assignments and occasional plums – but all along there has always been, simultaneously lurking below the surface and exalted above all other things, one consuming obsession. And its name is Richard Nixon.

“He got elected [president] when I was eight years old,” Locker said in a recent visit to “The Foxhole.” “I just didn't really trust him.  I was excited when he got in trouble.” But Locker’s parents had voted for RN three times – in 1960, when Nixon lost to JFK; in 1968, when the former vice president finally captured the prize he had sought his entire adult life; and again in the landslide re-election victory of 1972 – and ultimately Locker was forced to admit: “I always found him fascinating, a fascinating person.”

That lifelong fascination has now culminated in "Nixon’s Gamble: How a President’s Own Secret Government Destroyed His Administration," published by Lyons Press last month.

On the enduring question of how much influence Kissinger exercised in the Nixon White House, Locker is unequivocal: “Nixon was the architect,” he said, “Kissinger was the draftsman.”

Deeply researched and keenly attuned to the personality of our thirty-seventh president, Nixon’s Gamble traces the catastrophe of Watergate back to the origins of the administration: Nixon’s deceptive practice of realpolitik during the 1968 campaign, his restructuring of the national security apparatus in January 1969, and his deep distrust of the very bureaucracy he had campaigned so hard to lead.

This distrust was rooted, Locker argues, in class consciousness. “The State Department crowd [Nixon] thought were all associated with what he called the Georgetown crowd.  Same with the CIA.  So he just didn't – he wasn't of them, they weren't of him, and he didn't trust them,” Locker told me. “He knew instinctively that those people looked down on him – had felt it throughout his entire career, even as vice president.”

Accordingly, Locker details Nixon’s efforts to establish a “secret government”: to run foreign policy and national security decision-making on his own, in collusion with national security adviser Henry Kissinger, installing at the relevant agencies and Cabinet departments men whom Nixon imagined would be loyal and content to accept their exclusion from the policy process.

ROSEN: What was it specifically that Nixon felt required this secrecy?

LOCKER: Well, when you talk about the opening to China, this is a country that we were at war with less than twenty years before he became president.  We fought the Chinese in Korea.…So there were people in the military who had served in the Korean War who had no intention of cozying up with the Red Chinese.  Nixon knew that he needed to bring China into the international community, but he couldn't do it openly….Nixon made his bones politically as part of the “Who lost China?” lobby, blaming Democrats for losing China during the Truman administration.  So for him to come out openly and say that [he would re-establish relations with Communist China] would cost him a lot of support in the military and on the right wing, politically.

In the first term, Nixon’s gamble – “to do it all in secret before the weight of the secrets crushed him,” as Locker writes – paid big dividends: the China mission, the “Vietnamization” of the war in Indochina, arms control accords with the Soviet Union. But by the second term, Nixon’s personal demons and the institutional responses from those excluded – the Pentagon, the intelligence community, the Washington press corps – contributed to his downfall.

ROSEN:  Nixon, it seems to me, had another option, which was to put in real loyalists in these [agencies] who would effectuate his vision, perhaps even do so in secret –

ROSEN:  – keep his secrets, and run the departments the way he wanted.  Why was that not an option?

LOCKER:  I really don't know why that wasn't an option.  Maybe it is he didn't have that many real loyalists….Mostly because he distrusted the bureaucracy.  It'd be one thing if he really trusted [Secretary of State William] Rogers or [Defense Secretary Melvin] Laird, but the people who worked for them weren't necessarily people who Nixon could trust.

On the enduring question of how much influence Kissinger exercised in the Nixon White House, Locker is unequivocal: “Nixon was the architect,” he said, “Kissinger was the draftsman.”

Yet on Nixon’s lot in history – whether he really deserves to be ranked by historians, as he consistently is, at or near the bottom of the presidents – Locker is divided, torn anew, as in childhood, between his recognition of Nixon’s central role in his own demise, and Locker’s enduring fascination with the character of Richard Nixon.

“I think, you know, the shame that he brought upon himself makes him deserve that fate,” Locker noted. “But there's a grudging admiration from me for what he was able to accomplish.  This was not a very charismatic person.  He didn't sweep people off their feet.  He did things by the force of personality and so many of the things that were accomplished in the administration were his ideas.”

Click here to watch the full episode of “The Foxhole” with guest Ray Locker.