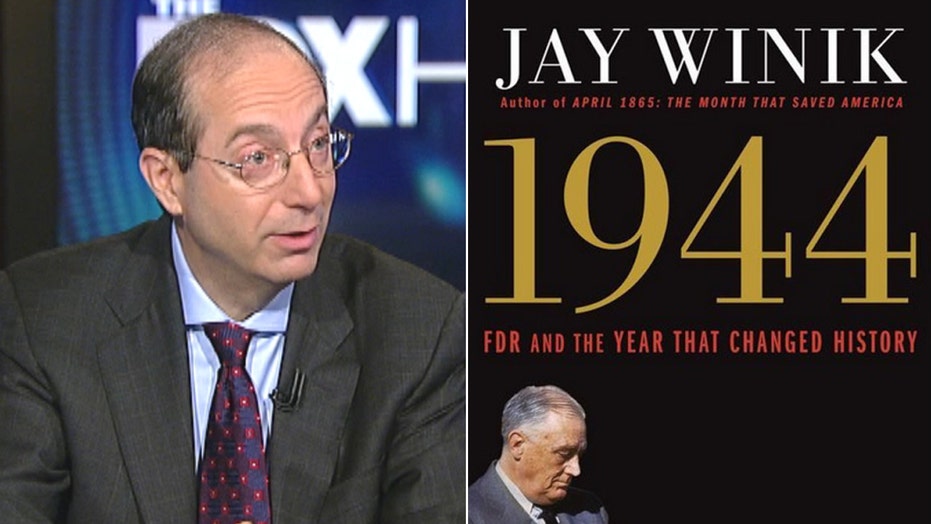 “I tend to sort of see things within snapshots in time,” Jay Winik told me recently. “In terms of narrative structure, it works well.”

This Winik knows firsthand. A Yale-educated “public historian,” Winik is the author of the wildly successful bestseller April 1865: The Month That Saved America (2001), an account of the end of Civil War – and of the Lincoln presidency – that made Winik one of the most popular historians of the new century, invited to lunch at the White House with President George W. Bush, a fan.

Winik’s new book, seven years in the making and published this fall, carries a similar title but otherwise marks a departure – several departures, actually – for the Chevy Chase-based author. At close to 700 pages, 1944: FDR and the Year That Changed History (Simon & Schuster) finds Winik not only writing at greater length but interweaving his portrait of Franklin Delano Roosevelt near the end of his days, a once-domineering politician crippled by polio, with the stories of the Allies laying plans for the D-Day invasion at Normandy and the Nazis preparing to gas 750,000 Hungarian Jews at Auschwitz. “The story is told in such a radically and dramatically different way,” Winik said in a recent visit to “The Foxhole,” “that it bears no resemblance to virtually anything you'll read anywhere else.”

As historians go, Winik appears less concerned with archival discovery than with what he likes to call “pounding narrative.” His are works of synthesis and pure storytelling, not incremental advances on the work of previous writers built around the adduction to the record of a new fact or piece of evidence. “I'm not trying to reinvent the wheel in terms of finding some little scholarly note that nobody has ever seen before,” Winik told me. “People say if I have a gift or if I have a genius, it's that I take something that's been plowed over many, many times before by the finest of historians and I just see it in a fresh and unique and different way.”

1944 revisits an enduring historical controversy, one Winik aims to reshape. The last two decades have seen historians more or less coalesce around the idea that for FDR to have ordered the bombing of the rail lines leading to the Auschwitz extermination complex would have been ambitious at best, most likely ineffectual, and quite possibly fatal for many of the very victims such an operation was conceived to rescue. That was the consensus of The Bombing of Auschwitz: Should the Allies Have Attempted It? (St. Martin’s Press, 2000) a collection of essays edited by noted scholars Michael J. Neufeld and Michael Berenbaum and published in association with the United States Holocaust Memorial Museum.

Winik contends such a military campaign was operationally feasible, symbolically powerful, and morally imperative, and he forcefully condemns FDR for doing “nothing” to derail the slaughter. “Not to put an end to the most grisly death machine history had ever recorded, even after the president had all the details about it,” Winik writes in 1944. “Not to slow the death machine, as was entirely doable. Not to make a statement to the world that such heinous acts could not go unaddressed. Not as one victim after another victim after another victim after another…were incinerated in the crematoriums or in vast pits of fire.”

Specialists in the subject of FDR, such as historian Geoffrey Ward, who has written several books about the life of the thirty-second president, have criticized Winik on several counts: for assuming that the question of bombing Auschwitz even made it to FDR’s desk, when there is no contemporaneous evidence that it did; for indulging in “fantasy” about how well aerial photographs of the time would have enabled the Pentagon to plan such a campaign. In our interview, Winik addressed each of these criticisms in turn, but found himself confronting a broader force, even more daunting: a cult of personality for FDR among establishment historians and biographers.

ROSEN: Do you sense that you are fighting against a kind of a consensus that exists, or bucking the trend here in your own conclusions?

WINIK:  Well, I do think there's an element of a love affair with FDR and what I found as I -- as I've gone around the country is that in talking about this [is] one feels as though they're criticizing somebody who's their father or their favorite uncle or their favorite cousin, a member of their own family. And I think professional historians have been reluctant to sort of go this extra step and say he should have done more. I'm quite confident that over time, my view will become the -- the orthodoxy as the years recede and as -- as -- as sentiments cool down and we can accept FDR as a great president, as one of our greatest presidents, but still, we have to see, there was a moral blind spot which led to this fatal, I believe, mistake.

ROSEN:  […] In his own mind, what was FDR's rationale for not electing to do this?

WINIK:  Right.  It -- it's -- it's a good question and it's a question we don't have a definitive answer….We know that in '44, FDR was sick of congestive heart failure….We also know that he was determined to win the war the quickest way possible.  And his line was -- the line of the administration was that by winning the war quickly, we can save the Jews, to which the nation eloquently responded.  They said: Yes, if there are any Jews left. And then finally, Roosevelt cared about his post-war vision, which was establishing the United Nations.  That was going to be his great legacy. But unfortunately, his fertile imagination, which understood so much about the war and made so many wise and far-reaching military decisions, he never quite grasped the moral dimensions and the moral imperative of making a statement to the world that the Final Solution was abhorrent…

It took Winik almost twice as long to finish 1944 as his books usually require. But in addition to enjoying a public prominence most historians never attain, Winik has achieved something equally cherished: the esteem of his heroes, among them David McCullough, possibly the most popular “public historian” of the last fifty years. “I saw him not too long ago,” Winik recalled in “The Foxhole.” “And he looked at me and he said, ‘Jay, you're pretty damned good.’”