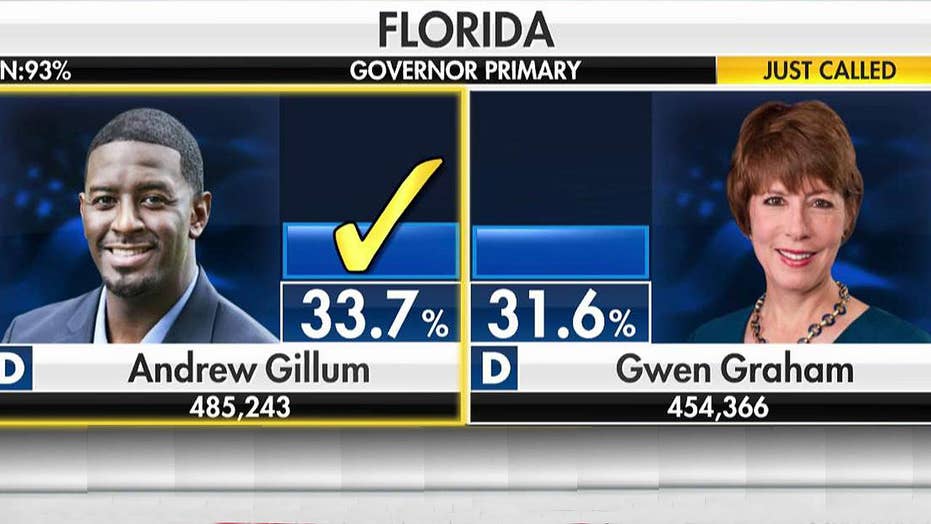 The first test of the 2020 race for the White House – and of the possible impeachment of President Trump before he can even run for re-election – will come this November in the Florida election for governor.

Gillum won an upset victory over three better-funded Democratic candidates, while DeSantis captured the Republican nomination with the help of an endorsement from President Trump.

The outcome of the Gillum-DeSantis race – between candidates who are polar opposites in many ways – will be a profound indicator of three things: how the American people feel about the policies of President Trump; what they think of the possibility of impeaching him; and how they may vote in the next presidential election if Trump is on the ballot.

Gillum explicitly supports impeachment of President Trump, and is expected continue calling for it on the campaign trail – even though governors have no role in the impeachment process. In contrast, DeSantis has been one of President Trump’s fiercest and most visible advocates in the House of Representatives.

There couldn’t be a clearer contest between pro-Trump and anti-Trump candidates.

Gillum is a devout progressive. He supports abolishing the Immigration and Customs Enforcement agency (ICE). He favors the “Medicare for all” plan advanced by Sen. Bernie Sander, I-Vt. And he favors raising the corporate tax rate to pay for increased education funding.

DeSantis is a disciple of the Trump “Make America Great Again” agenda and regularly defends the president against criticism. He has been a strong opponent of the investigation by Special Counsel Robert Mueller into Russian interference in the 2016 U.S. presidential election and possible collusion between the Russians and the Trump campaign or Trump himself.

Gillum ran with the enthusiastic support of Bernie Sanders, as well as funding from prominent left-wing Democrats George Soros and Tom Steyer. Steyer has become a familiar face to millions of Americans through appearances in TV ads he is funding calling for President Trump’s impeachment.

DeSantis probably owes his primary victory to the strong endorsement he received from President Trump.

If Gillum becomes governor in Florida and Democrats win majority control of the U.S. House in the midterm elections, his victory almost certainly means the Democrats will lose whatever inhibitions they may have about impeaching the president.

One thing is certain: The Gillum-DeSantis race will be bitter, hard fought, and expensive – costing millions of dollars.

There is one other issue that is raised by Gillum’s nomination, along with the nomination of Stacey Abrams in the race for governor of Georgia. For the first time, Democrats are running two progressive African-Americans in the South who have consciously avoided tacking to the center.

The hypothesis that both Gillum and Abrams have embraced is that moving to the center would not get them as many votes as their strong advocacy of a progressive agenda will bring. Both candidates believe that the election will ultimately be about the mobilization of core Democratic constituencies – minorities, women, and working-class whites who feel economically left behind, despite President Trump’s election.

To be sure, the Florida primary has gotten a lot of attention because of the nominations of DeSantis and Gillum. Nonetheless, it needs to be seen for what it is: a proxy for the 2020 presidential race; a proxy for the impeachment fight that is likely to come if Democrats win control of the House; and a referendum on whether a new approach to politics will work for the Democratic Party.

The new approach – being taken by Gillum and also Abrams in Georgia and some Democrats in other states – eschews moderation and emphasizes advocacy of strongly progressive positions.

Will this new approach win competitive races for Democratic candidates around the country? Or will Gillum, Abrams and other progressives go down to defeat because they don’t appeal to moderate Democrats, independents, and even some Republicans?

We’ll have to wait for the Nov. 6 midterm elections to find out.