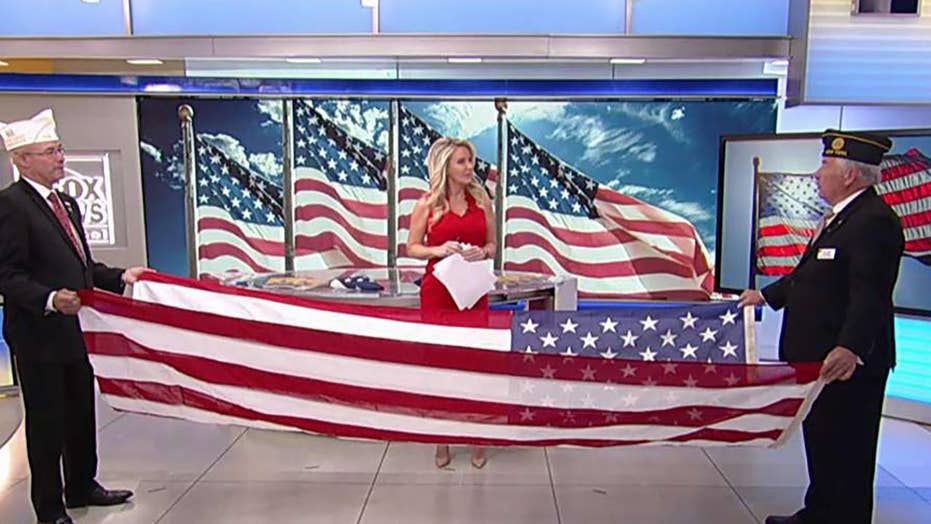 Celebrating Flag Day and how to fold an American flag

Sunday is Flag Day – the 243rd anniversary of the adoption of the Stars and Stripes as America’s flag. It comes at a time of great cultural and political upheaval.

From ongoing protests in dozens of cities sparked by the death of George Floyd at the hands of Minneapolis police to anarchists and others establishing an “autonomous zone” in Seattle, rarely have we needed more of an excuse to lift up and celebrate Old Glory – a traditionally unifying symbol that stands for freedom, sacrifice, national pride, equality and American exceptionalism.

Although the Second Continental Congress passed a resolution on June 14, 1777, declaring the flag to be 13 alternating red and white stripes along with a constellation of white stars in a blue field, it wasn’t until 1916 that June 14 was officially established as Flag Day.

FLAG DAY: WHAT IS IT AND WHY DO WE CELEBRATE IT?

An editorial in The New York Times on that first Flag Day stated: “With united hearts; so, no matter what temporary bitterness and forces of division may have crept in here and there, Americans stand and will stand.”

At the time, America was a land of newly arrived immigrants and World War I was raging in Europe, with calls for the U.S. to join in the fight. The happened the following year.

In so many ways, the more times change, the more things remain the same. Tensions are a part of democracy and a representative republic. It has always been that way – and always will be.

Children in Baldwin, N.Y., line up to march with American flags in a town celebration on July 4, 1997.

My reverence for the flag predates my memory. Like many of our neighbors, we flew a large flag from our front stoop on patriotic holidays. An American flag waving in the breeze off someone’s house is a wonderful sight. Whenever I see one, I’m always pretty sure I could get along with the people who live inside.

As an 8th grader at St. Christopher’s School, I was thrilled to be selected to raise and lower the school’s American flag. My buddy David and I took the responsibility seriously, folding the flag into its traditional star-studded triangle each afternoon at 3 p.m.

I’ve had the privilege of being the flag bearer for our Boy Scout troop and have placed small flags on soldier’s graves on Memorial Day weekend.  I once surprised my parents by erecting a tall flag pole on our family’s front lawn. When my mom and dad sold the house in 2009 and the new owner tore it down, I cried a little inside.

But perhaps my most poignant memory of Old Glory revolves around a town-wide Fourth of July event that I organized back in Baldwin between 1995 and 1997. In planning what I called An American Celebration, I envisioned Central Avenue lined with fluttering flags off every utility pole and kids marching with Old Glory on their shoulders.  It was to be a Norman Rockwell Saturday Evening Post cover come to life.

We had a very limited budget, and so a friend of mine encouraged me to go see a gentleman named Gary Eckels. Eckels was a bit of a town legend and active in the town’s volunteer fire department. He was one of those guys who makes a town run well and had a reputation for getting things done.

When I drove up to his house, I noticed a gigantic flag pole in the front yard. Turned out it was from Baldwin’s first school, which had since been torn down. I immediately knew Eckels was my kind of guy. Anybody who would go to that kind of effort to rescue a piece of history like that is worth knowing.

I rang the bell and over an intercom, Eckels told me to come around back and go down to his home office in the basement. After introducing myself and explaining the need, he leaned back in his office chair, and with a cigar between his teeth, rendered the verdict.

"If you want to fly the American flag, just tell me how many you need and you'll have them," he said matter-of-factly. “There can never be too many flags and they can never be flown enough.”

Thanking him, I went home and began affixing brackets up and down the road. A few days before July 4, a truck pulled up in front of our house. It was overflowing with flags on poles.

I’ll never forget the sight of those flags on the morning of our event, each one waving gently in the warm July air. There were enough left over for kids to march holding them, even though in some cases the flags were bigger than them. Over 20 years later, I still hear from people who remember the scene.

I’ve especially never forgotten Gary Eckels’ kindness and his patriotic commitment. He represents the best of America. He doesn’t take – he’s constantly giving back, whether it’s fighting a fire at 2 a.m. or loaning American flags to help celebrate the gift that is our nation.

During New York City’s first celebration of Flag Day in 1916 – a series of grand ceremonies marked by pomp and pageantry – a band played “The World Turned Upside Down.” Some historians suggest the English ballad was played by the British Army as its soldiers retreated from Yorktown in 1781 – the last major battle of the Revolutionary War.

The world too often seems upside down these days, but despite the metaphorical and actual “bombs bursting in air,” at first light of morning, our great flag is “still there.”