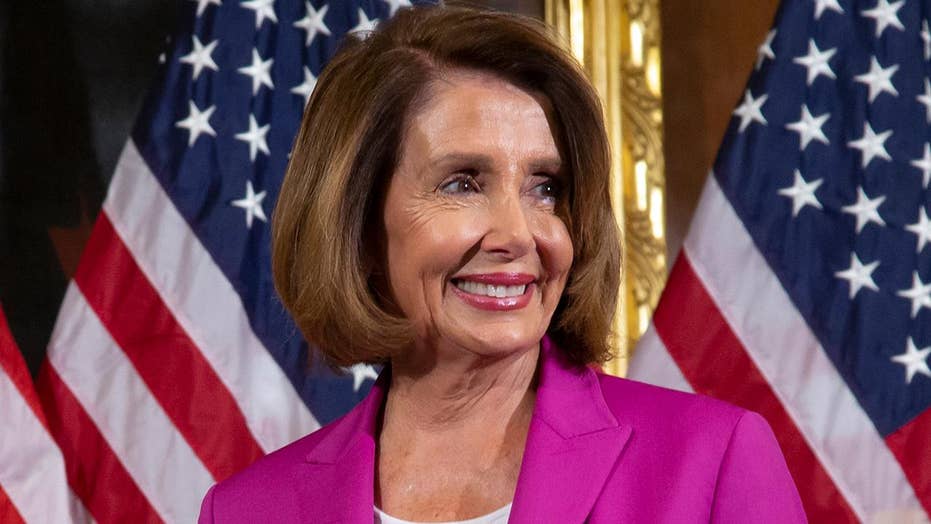 House Speaker Nancy Pelosi urges President Trump to delay his State of the Union address until the government reopens or submit it in writing to Congress; Mike Emanuel reports from Capitol Hill.

The call by House Speaker Nancy Pelosi for President Trump to postpone his State of the Union address until the partial government shutdown ends has thrown official Washington into an uproar.

But the president – a master of creative thinking – shouldn’t let Pelosi’s unprecedented call for him to reschedule his address to a joint meeting of Congress, scheduled for Jan. 29, stop him from communicating to the American people.

There are plenty of alternative ways for President Trump to talk about where we are as a country today and what he wants Congress to do in the year ahead.

Pelosi, D-Calif., made her extraordinary call to the president in a letter Wednesday. She cited security concerns – because the Secret Service and Homeland Security Department are not funded during the shutdown – as her reason for requesting the postponement of the address until after the shutdown ends.

The Homeland Security Department pushed back and said security could be provided, Republicans in Congress criticized Pelosi’s move, and President Trump responded Thursday by denying a congressional delegation led by Pelosi the use of military aircraft for a trip to meet with top NATO commanders in Brussels and with members of the military in Afghanistan.

The State of the Union address is one of the great spectacles of American politics. It’s the moment when the president of the United States is announced in the House chamber to the sounds of thunderous applause. It’s a time-honored tradition.

But the president isn’t required to give the speech in the chamber of the House, now controlled by Pelosi and her Democratic majority.

First, let’s get what is required of the president straight. The president has a constitutional responsibility to present a report “from time to time,” to Congress. Thomas Jefferson began the Annual Message tradition in 1801. It was read by the House and Senate clerks.

Woodrow Wilson changed the practice, delivering the address in person at his option in 1913.

The appearance in the well of the House is tradition, not a matter of law or the Constitution. This presents a range of options for President Trump to deliver his remarks.

Here are five ways the president can turn his disinvitation from Speaker Pelosi into a communications victory:

1. Invite members of Congress to the East Room of the White House

The East Room is beautiful and it’s the biggest room in the White House. It holds a couple of hundred guests. The president can invite members of Congress to hear him deliver an address there.

There is nothing that prevents the speech from being given at the White House. Perhaps the president could walk everyone over the State Dining Room afterward for burgers and fries.

Either way, it’s a controlled environment on the president’s turf for him to deliver a strong message to the nation.

2. Give the speech from the Senate chamber

While the speaker of the House usually presides over the joint session of Congress, that is not always the case. There is historical precedent during the early years in Washington. And more recent presidents have previously delivered addresses in the Senate chamber – including Presidents Ford, Nixon, Truman and Hoover.

Sen. Rand Paul, R-Ky., and some House Republicans have already proposed this commonsense option. Vice President Mike Pence, as the Senate president, could provide an invitation to the chamber. But it would be unwise to do this without having the support of Majority Leader Mitch McConnell, R-Ky.

With the House more focused on partisan attacks and impeachment, moving the speech across the building would provide the president the ability to put his policy agenda before the people.

The White House gives the president what has been called the best home-court advantage on the planet. An Oval Office address is simple, controlled and effective. No need to worry about only half the crowd standing, or scowling Democrats sitting on their hands.

The public airways are already available to the president and a West Wing address would affirm he’s at this desk and doing the people’s work. TV networks, cable news channels and websites would bring the speech to millions of people – just as they normally do for the State of the Union address delivered in the House chamber.

No portion of the Constitution prescribes that the State of the Union report must be before Congress or even in Washington – only that it be transmitted to Congress.

Many presidents have used the address to talk directly to the American people. President Trump – far more comfortable on the campaign trail – could skip the Capitol spectacle in favor of delivering his agenda in a series of speeches in swing states.

Give a speech on infrastructure in the Midwest. Head to an Army post or Navy base to talk about national security. Bring together construction workers and business leaders to discuss the economy. The president can take the show on the road. He’s at his best when he’s outside of Washington.

For better or worse, President Trump loves Twitter. Perhaps there’s an opportunity there as well for a unique approach.

From 1801 and 1913, presidents fulfilled their constitutional duty by sending their yearly report as a formal written letter to Congress, with several exceeding 25,000 words.

The average length of a 20th century State of the Union was approximately 5,000 words.

Twitter allows up to 280 characters. The average length of a word in the English language is approximately five letters. Doing the math, that means the president could give Americans his address by sending out 89 tweets in succession. He might actually like that.

Whatever he does, President Trump shouldn’t let Speaker Pelosi silence him. And knowing him, he won’t.