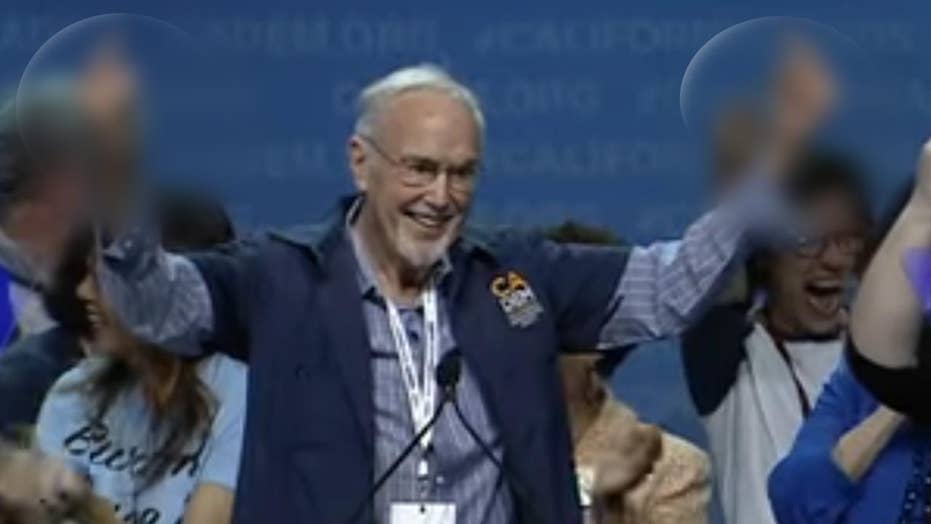 Outgoing California Democratic Party Chairman John Burton performed the only action left to an impotent, leftist, cadre head in a lawful society. He shouted. He likely would’ve preferred some kind of violent action, but instead he simply advocated for one.

Specifically, he invited the listening-impaired translators onto the stage Saturday at the California’s Democratic Party convention in Sacramento to “thank them,” and then, as they were flashing their hands in applause for his service to the party, he put his middle finger in the air and lead a chant, “F*** Donald Trump!”

Perhaps more remarkable was the eager willingness of the crowd to join in with him, chanting, while House Minority Leader Nancy Pelosi and Obama’s Former Secretary of Labor Hilda Solis looked on, laughing it up in the background.

Why should this astonish anyone? This is the party recently all-in for a woman who unapologetically called half the country “deplorables.” Those claiming she apologized have it wrong. Hillary Clinton only apologized for the number of deplorables referenced.

Well, Stalin said that one death could be seen as a tragedy, but a million deaths was simply a statistic. To Democrats, in this case, it only depends on who’s dying.

This is, in fact, your tax dollars at work.

Since the government removed the Bible and prayer from our schools, our nation has been educating young people to believe that life happens purely by accident and that evolution dictates that survival of the fittest is the supreme law of the land (contradicting the foundational values of our representative republic). Therefore, when Democrats are so easily convinced that some people just don’t have the same value as other people, and that they can be written off as “irredeemable,” which literally means they are worthless, we should hardly be surprised. That’s the same way the Nazis spoke about Jews and gays.

Democrats view Trump as deplorable, irredeemable, and therefore no insult is too great (Just watch all the most recent “Saturday Night Live” cold-opens), no threat is too bold (Violence Against Trump Supporters the New Normal), no violent imagining too far-fetched (Madonna calls for burning down the White House), and, of course, no commentary too lewd or crass for general consumption (see above).

It is this egregious disdain for the humanity of others that comprises the basis for today’s Democratic party. For this reason, they attempted to eliminate God from the party’s platform in 2012. Reinstating it by unpopular vote (It’s-not-who-votes-that-counts-it’s-who-counts-the-votes Villaraigosa saw to that), they never addressed the impulse behind the move.

Unfortunately, great damage is already accomplished. Thanks to government schooling, our youth believe that socialism is just like grandpa with candy (witness the popularity of Bernie Sanders), never having been taught the truth: that socialists are responsible for about one hundred million deaths last century. After all, if I have a right to health care, then I’m entitled to take it by force, if necessary. And if I’m angry, survival of the fittest dictates I can loot and set fire. It’s no wonder we are dealing with a bullying epidemic in our schools.

Young undergrads get up and walk out on Pence’s commencement speech at Notre Dame because they think that protecting their minds from his ideas on freedom of speech is loftier than discourse or free speech. They are caught, now, ensnared in the misguided and dangerous notion that some people – even those occupying the highest office in the land – are truly beneath their dignity, nay, worthy of their unabashed scorn.

The famous quote from Ronald Reagan,“The trouble with our liberal friends isn't that they're ignorant; it's just that they know so much that isn’t true,” has become The trouble with leftists is they don’t respect human life. And when they lose respect for human life, as the Democrat's Party has finally done, not only are they anti-American, because our constitution preserves everyone’s rights to life and liberty, but they become downright dangerous.

The wake-up call is coming. Parents are noticing that the education system we have all relied on for so long is failing worse each time the government promises to fix it (nine times in the past 27 years). My book, “They’re YOUR Kids,” details the decline in our schools and addresses what to do about it.

First and foremost, we need to be teaching our children that they have value and purpose, and that no life is truly deplorable.

The emergent issue we must deal with, which Trump laid out so beautifully in his speech Sunday at the Arab Islamic American Summit, is our engagement in the fight against evil. To representatives from more than fifty Muslim nations, Trump alighted specifically on heretofore unspoken persecution of Jews and the slaughter of Christians. What is more evil than the systemic devaluation of human life, such as we see with international terrorism (and, also, from within the Democrat party)?

Author’s note: There is a pernicious gloom that seeks to spread across the globe, and there is only one defense available to all. My husband Kevin and I created our film, “Let There Be Light,” to push back against the darkness. Everyone on the side of good must do their part. Join us now on the film’s website, and this fall in theaters, to help spread light into the darkness.