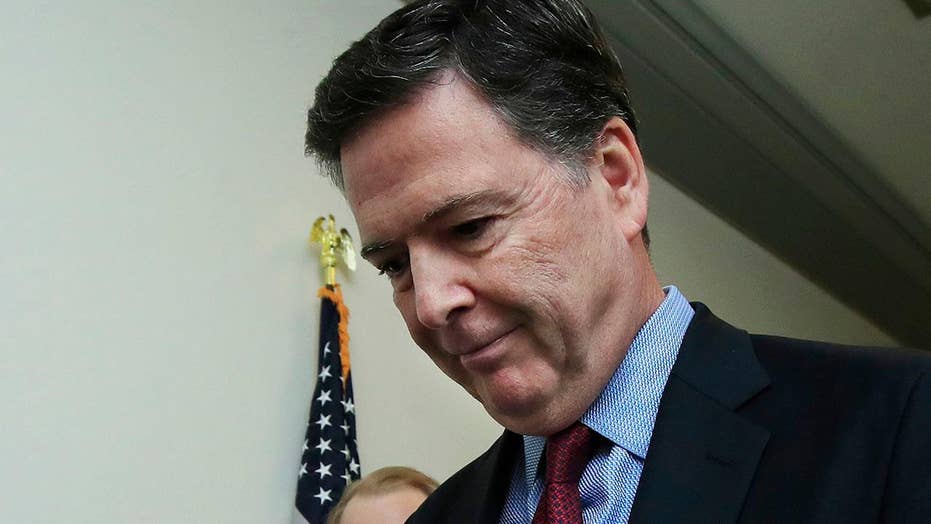 Ex-FBI assistant director: Comey a disgrace to the agency

Chris Swecker sounds off on the former FBI director's inability to answer questions on the investigation into Russian election interference.

The appearance of fired and disgraced FBI Director James Comey before two congressional committees Friday is a reminder of his brief but profoundly disappointing tenure leading the FBI – the outstanding law enforcement agency where I served for 24 years.

Unfortunately, members of the House Judiciary Committee and the House Oversight and Government Reform Committee were unable to get satisfactory answers from Comey regarding his illegal actions and violations of longstanding FBI and Justice Department regulations and procedures.

The chairmen of the two committees released a 235-page transcript Saturday of their interview with Comey.

According to a statement issued by the office of Oversight Committee Chairman Trey Gowdy, R-S.C., Comey said “I don’t remember” 71 times, “I don’t know” 166 times, and “I don’t recall” eight times during his interview.

Comey flat-out refused to answer some questions dealing with the investigation now led by Special Counsel Robert Mueller of Russian interference in the 2016 presidential election.

“To the extent, I recall facts developed during our investigation of Russian interference and the potential connection of Americans, I think that's a question that the FBI doesn't want me answering,” Comey said in response to a question.

Comey’s record of lawbreaking and violations dealt with prosecution judgments, media leaks, the theft of government records and the conduct of objective investigations.

It’s a tragedy in that Comey and his former inner circle – the now infamous troika of fired FBI Deputy Director Andrew McCabe, fired FBI agent Peter Strzok and former FBI lawyer Lisa Page – have attempted to cloak themselves in the FBI’s rich tradition of fidelity, bravery, and integrity.

In reality, these four former FBI officials have done more to hinder the daily work of the 35,000 selfless and hardworking men and women of the FBI than anyone in the storied agency’s history.

As a proud veteran of the FBI, it pains me to hear from friends, associates and colleagues who now question the FBI’s impartiality and motives in conducting sensitive investigations.

Unfortunately, no one can blame people for being skeptical of the FBI in light of the excruciating, Trump-hating texts during the 2016 presidential election campaign between Strzok and Page (who were engaged in an extramarital affair at the time), and following Comey’s well-publicized anti-Trump comments.

The former FBI director has written a book, given numerous media interviews, and used social media to bash President Trump, and urged Americans to “vote Democrat” before the midterm elections in November.

On top of this, there have been stark revelations in the Justice Department inspector general’s reports concerning former Deputy Director McCabe’s lies and leaks under the direct tutelage of Comey, who tried to make his own lies and leaks seem virtuous.

When FBI agents hit the street to conduct an investigation – and especially when trying to persuade people to provide needed information – their greatest asset is the respect and credibility of the FBI as an institution and the reputation of FBI agents for fairness and impartiality.

Juries that base their verdicts on FBI evidence and testimony trust that the scales were not tipped by the personal biases or political considerations of FBI agents and officials.

Unfortunately, the actions of Comey and his inner circle caused too many Americans to question the core values of the FBI as an institution.

It is out of total respect for the finest law enforcement and intelligence organization in the world and outstanding professionals that many former FBI executives – including me – have broken tradition and publicly criticized Comey and his troika for their misconduct, which can’t be disputed.

First, as the Justice Department inspector general found, Comey was insubordinate and violated department rules in playing the role of investigator, prosecutor, and judge in publicly exonerating former Secretary of State Hillary Clinton in her email scandal.

Clinton – who used a private email account and server rather than the State Department email system she was required to use – was the subject of one of the most sensitive FBI investigations in history when she was running for president.

It is fundamental to our justice system that investigators do not also play the role of prosecutor. Yet instead of reporting the findings of the FBI investigation of Clinton to then-Attorney General Loretta Lynch so Lynch could decide what action to take, Comey staged a news conference to announce that he had concluded Clinton should not be prosecuted.

If I had pulled the same stunt when I was head of FBI’s Criminal Investigative Division under then-Deputy Attorney General Comey, I would have – and should have – been suspended and fired. So much for the value of fidelity.

Second, Comey illegally removed his notes and memos describing details of his meetings with President Trump that were conducted as part of his official duties as FBI director. These records belonged to the FBI – not Comey.

Comey then indirectly leaked his memos and notes to the media by laundering them through a university professor. If the FBI director acts as if he is not subject to the well-established rules of the Justice Department and is above the law, it is easy to understand why his deputy director felt justified in doing the same.

In fact, leaking stolen FBI documents is illegal – regardless of how virtuous you view your actions. Scratch the integrity core value.

Third, the extensive personal and political bias that prevailed within Comey’s inner circle is beyond unacceptable. Strozk and Page’s texts denouncing then-presidential candidate Trump speak for themselves.

It is amazing that neither Comey nor McCabe saw any problems with McCabe personally initiating and supervising the investigation of whether the Trump campaign and Russia worked together to get Trump elected president.

McCabe should have recused himself from any involvement in the “Russia collusion” investigation because his wife was an unsuccessful Democratic candidate for the state Senate in Virginia when she accepted over $1 million in political campaign donations. The donations were bundled together by Clinton loyalist and then-Virginia Democratic Gov. Terry McAuliffe.

McCabe was also known to freely and openly express his disdain for Trump in meetings with other FBI executives.

Fourth, under Comey’s leadership, his inner circle used an unreliable opposition research “dossier” financed in part by Hillary Clinton’s campaign when she was running for president against Trump in 2016. The dossier was used to support a series of electronic surveillance warrants under the Foreign Intelligence Surveillance Act (FISA) to intercept communications of Trump campaign operatives.

Had the FISA judge been informed of the true origins of the information it is highly unlikely that the judge would have issued the requisite orders. The Justice Department inspector general is investigating this alleged abuse of FISA and his findings will be far more credible that any partisan congressional committee.

Fourth, Comey’s courage failed him when it was most needed. When Attorney General Lynch instructed him to refer to the Clinton investigation as a “matter” and severely restricted the scope of the Clinton email and Clinton Foundation investigations, Comey went along.

When President Trump allegedly demanded Comey’s loyalty and asked for leniency for former White House National Security Adviser Michael Flynn, Comey scurried back to the office and prepared memos. Clearly, Comey placed his job security over pushing back forcefully on the use of the FBI to achieve political ends. Scratch the bravery element.

Finally, anyone who questions the appointment of Special Counsel Mueller to conduct an independent investigation of the Russia case can thank Comey and McCabe.

In the words of ex-FBI Assistant Director Kevin Brock, my former colleague: “Comey personally fast-tracked McCabe’s career into the deputy director position. McCabe was not happy that the president fired his boss and that (Deputy Attorney General Rod) Rosenstein provided the ammo.”

Rosenstein was faced with a tough decision. He could leave the Russia investigation in the hands of the angry and hopelessly biased team of Acting FBI Director McCabe, Deputy Assistant Director Strzok and attorney Page. Or, he could appoint a special counsel with integrity and a reputation for impartiality. He wisely chose the latter, appointing Mueller.

From the cradle of the FBI Academy, FBI agents are taught to always maintain the confidentiality of investigations, sources and methods. Keeping a low profile goes with the job, so it’s unusual to see former FBI agents criticize FBI leadership.

Those of us who are speaking out now believe deeply that the agency where we served honorably should never become a tool to promote political agendas.

This separation of law enforcement from politics is what separates America from Vladimir Putin’s Russia. Nor should operatives of the nation’s primary law enforcement and intelligence agency allow themselves to succumb to a temptation to impose their notions of morality on the electorate. That is the slipperiest of slopes.

The American public deserves to know the full scope and extent of the actions and roles of the Comey inner circle in order to prevent future abuses. Let’s hope the ongoing Justice Department inspector general’s investigation will ultimately hold the right people accountable.

It is obvious that toothless and bloviating congressional committees will never get to the truth.

A thousand congressional hearings will never get Comey to admit what we all suspect: his personal hubris and feelings of moral superiority allowed him to believe the normal rules established by the American people through duly enacted laws, regulations and procedures did not apply to him.

We need to draw a clear distinction between the FBI as an institution of 35,000 dedicated professionals and Comey – a brief aberration in the bureau’s distinguished 110-year history.

Comey’s name should be forever removed from the roster of FBI employees who have embraced the core values of the FBI and who have wielded the enormous power of the justice system with impartiality and integrity.​​​​​