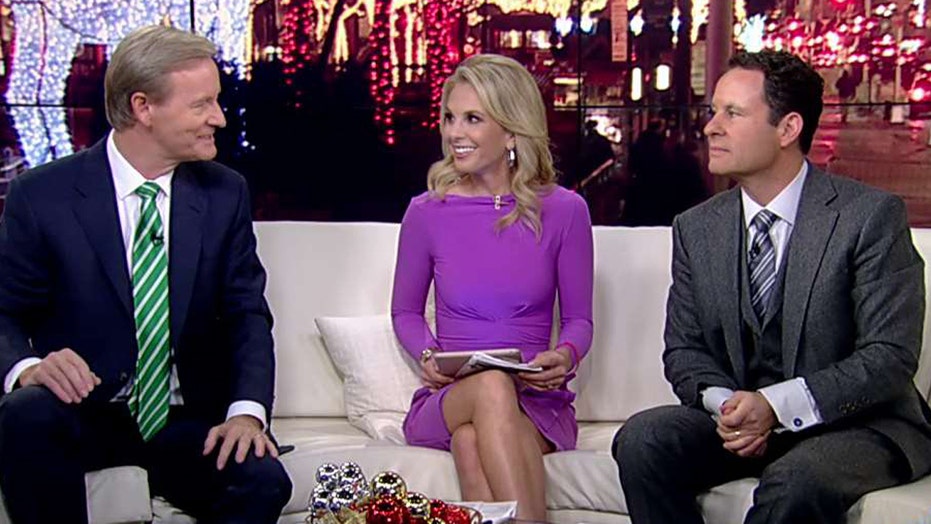 The best of Elisabeth Hasselbeck on 'Fox &amp; Friends'

A look back at the co-host's greatest moments

My time at Fox was one of the best things that ever happened to me.

My failure to practice the consistent discipline of sleep in order to match the demands of the job ultimately prevented me from harvesting the fruits of my labor. I was chasing being capable and not resting fully in being called, and that led me to a mentality of overworking and not sur­rendering as much as I could have. I was not good at giving up on the day and getting rest. I did not know how and thought I could somehow work my way through the point of exhaustion.

Being a working mom, both then and now, is something I am happy to be.

But during those years at Fox, it was not hard because I was a work­ing mom. The issue was that most days, I was striving at work and barely surviving at home. The areas of life in which I once found joy were leaving me feeling numb.

I was planning to keep pushing through. That is what a good teammate did. That is what I was good at – trying hard, not giving up, not giving in, earning the spot even after I had it. However, in an attempt to over­compensate for how underqualified I thought I was, I fell into striving and failed at thriving.

I spent Monday through Friday expending anything I had in my tank at work because I wanted to do well by my team. I convinced myself that I could keep up the pace. Sadly, I was keeping the pace, yet losing the race. Our great God knew me well enough to bring my fast running to a screeching halt.

A routine checkup became anything but routine when I heard my name begin a sentence with a formal tone. “Mrs. Hasselbeck,” the doctor said, “we found a tumor. It is concerning, so we should look at a calendar.”

“Surgery. This needs to be removed immediately, so we can deter­mine what the next step will be . . .”

When you are at Memorial Sloan Kettering Cancer Center seeing the best of the best doctors, you follow the instruction. I could sense concern.

God gave me a break in the form of a medical scare, and sadly it took the necessary anesthesia to allow me more than four hours of real sleep. I slept so long after my procedure that the surgeon had to come in and hit my leg to wake me up after I had been out for more than ten hours!

During the week after surgery, God permitted uncertainty. That, coupled with pain and my tendency to overthink or worry, was a recipe for some really awful days of thinking the worst. The results would take a week. Yet, in the midst of pain and wondering, I parked right in the spot of Scripture. I camped out in sleep.

During that week, I had some of the best days at home I had experi­enced in more than a year. I knew the biopsy of the tumor was out of my control, and I felt free to pray for a clean bill of health, knowing I would be held by the Maker of the mountains and the Father who knew every hair on my head. There I was – either a mom healing to get ready for “next steps” or a mom who would get a benign report and begin healing to train to run again. An indescribable peace washed over me where I would normally have bathed in worry. The gift of knowing that the un­changing God had gone before me either way calmed me.

In my heart were a joy and a peace that made no sense given the lack of concrete medical information about the tumor. I could never have conjured up such a sense of peace and joy, but it was real, and for me to realize I could feel those two things again took being stuck in bed.

Those days of rest were a coming up for air that I needed. Perhaps that was a signal to change things up again, I concluded. So I decided that once I got back to work, I would try to do just that.

Resting up brought the joy of playing games with the kids again. We did crafts and painted and sang and baked. The post-op time was like a vacation!

On day eight when I called to get the test results, I was prepared in peace to receive the direction God would give me: benign. Praising God with the peace of whatever that word was going to be was His gift to me.

A Gift That Allowed Me to Get Back on Track

Once I felt strong enough to get back at it when it came to work, it was not long before my old habits began to sneak in. Slowly, nine hours of sleep became six hours, which became four, then three. And all the crank­iness and spikiness returned once I arrived home each day.

I began to hear again the voice that told me I was underqualified – that I had to catch up, that I had missed so much, that I had to prove that I did not miss a beat, that I was not a weak link at Fox & Friends. Before long, the walk-on was at it again. And the old pattern snuck its way back into my days because I let it.

I recall the look of concern on the face of my best friend, my soul mate, Tim. He could see what was no longer visible to me: I had lost perspective on a healthy work habit. He knew that I was not running behind; I was running on empty.

God knew me well and allowed a really hard day to show me that a hard decision had to be made. If after the surgery I had returned to my old habits that led to exhaustion, which I believe was His way of trying to get my attention, He would have to allow something tougher to break me. And He did. I had a “terrible, horrible, no good, very bad day.” The typi­cal backlash that I had endured for over a decade and a half after com­menting on any given news story felt hotter, and I was not as flame resistant as I had felt in the past. Perhaps when you have deprived yourself of sleep, pushed yourself to the limits of performance, and reached a stress level already at a high, anything would sting or burn more. This day in particular was the one that brought me to my knees and showed me that I was, in fact, not enough, and that I was not leaving enough room for the Holy Spirit in my life. It was a day that indicated sharply that it was time for something to change. I had hit a breaking point.

As Psalm 120:1 says, “I cried to the Lord, and He heard me” (nkjv). God gave me permission to do what I would never have given myself permis­sion to do. He gave me the permission to walk away from my job and leave something that was great – just not great for me at the time. There is a big difference, and I had just learned that the hard way. The lessons I learned about leaving well at The View would be applied as I left Fox. This time, however, I was not leaving because I had to but because I needed to.

My last day at Fox was unforgettable because I loved the group I was saying goodbye to. It was also unforgettable because, although I had spent the last three years attempting to prove otherwise, I was now actually admitting that I could not do it all as well as I was trying to. It was time for my family to get the best of me, not the rest of me. The freedom that came with that realization, for me, was astonishing. I am forever thankful to have been brought to a point where I had to give it all to God. In this case, that required giving up on what I had been holding all on my own.

Excerpted from "Point of View: A Fresh look at Work, Faith, and Freedom." Copyright © 2019 by Elisabeth Hasselbeck. Used by permission of WaterBrook, an imprint of Penguin Random House LLC.

Elisabeth Hasselbeck is an Emmy Award–winning talk show host, former broadcaster, and the author of the new book "Point of View: A Fresh Look at Work, Faith and Freedom" (WaterBrook). Her two previous New York Times bestsellers are The G-Free Diet and Deliciously G-Free.